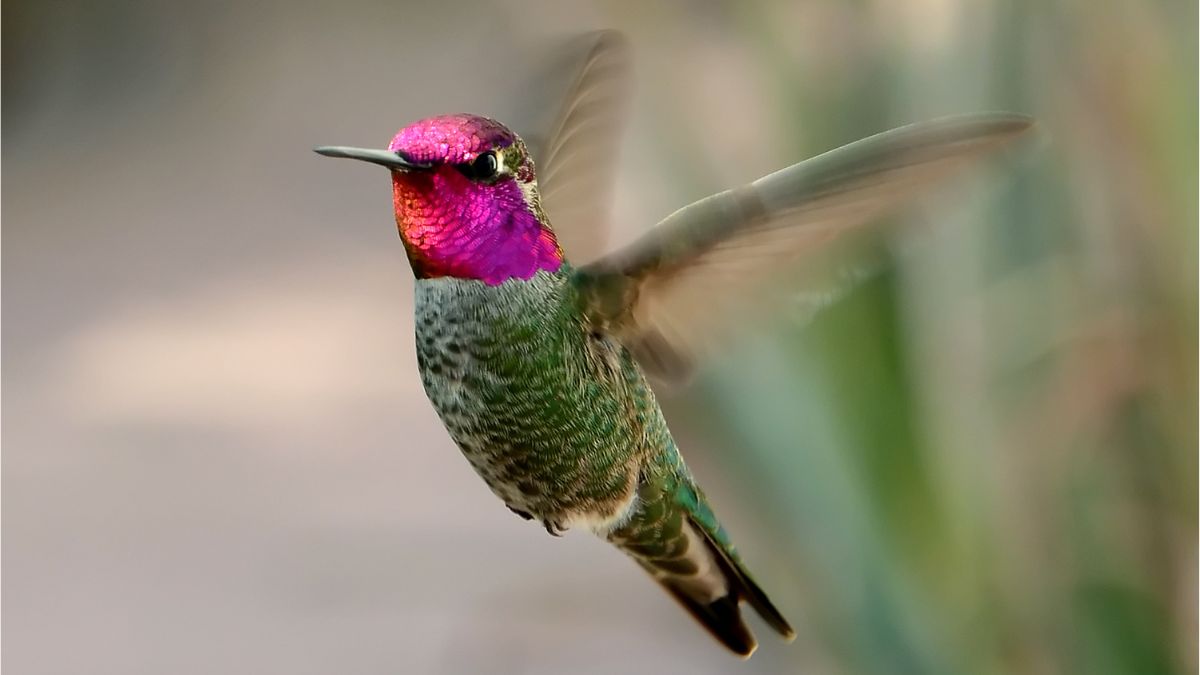 Last Updated on August 3, 2022 by Guillermina

Are hummingbirds birds or insects? Discover the real truth.

Found only in the Americas, Hummingbirds are beautiful flying creatures that attract attention wherever they appear. At least 350 species of hummingbirds are known, and truth be told, day by day we learn more and more about new, so far undiscovered specimens.

One of the most common questions asked by people just entering the world of these unusual creatures is: are hummingbirds birds or insects? If you are in doubt and want to know the correct answer, we suggest you continue reading this article. The answer might really surprise you.

Are Hummingbirds Birds Or Insects?

Hummingbirds come from the family Trochilidae and are usually classified in the order Apodiformes, or otherwise in their own order, Trochiliformes.

Their specific appearance led the British naturalist John Gould to give various exotic names to these beauties. Some of them are still in use, and the most popular are coquette, fairy, hill star, wood star, sapphire, topaz, and finally sun gem.

Now that you know something about them, it’s time to find out the only true answer to the question “are hummingbirds birds or insects”. So let’s get to the point. Although their flight resembles insects, hummingbirds are actually one of the smallest birds in the world.

Not only are they small, but a good portion of them are miniature. Let this be supported by the fact that the so-called “giant” hummingbird (Patagona gigas) is actually only 8 inches long and weighs barely 0.7 ounces. We can unequivocally conclude that this “giant” specimen is less than that of most sparrows. 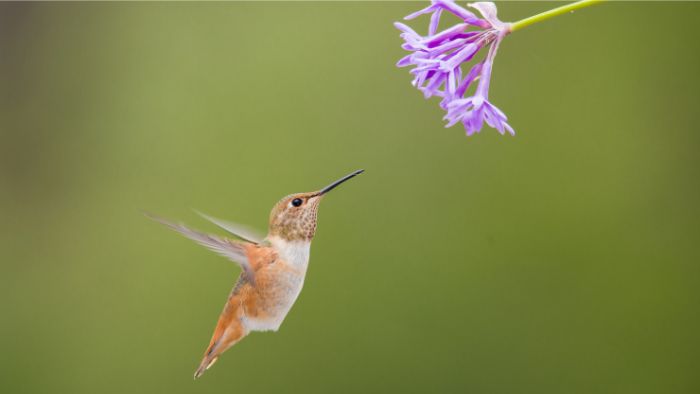 Physical Characteristics Of These Birds

Now that you know the right answers to the question “are hummingbirds birds or insects” it’s time to tell you a little more about this animal species.

Almost every experienced birder will recognize them by the characteristic humming sound that is actually created by the movement of their wings. Accordingly, understanding their basic characteristics will help you better understand these wonderful flying creatures.

Not surprisingly, many wonders “are hummingbirds birds or insects” when their characteristic size is taken into account. Truth be told, not all are miniature, there are some larger and more robust species, but whichever way you turn them they are still small compared to most other bird species.

Although quite different from other birds, hummers have a unique, yet similar shape that makes them almost immediately recognizable. Namely, almost every one of the 350 species known so far has a stubby streamlined body, long wings, and long, and narrow beaks. These are the main features that make a big difference between them and other bird species. 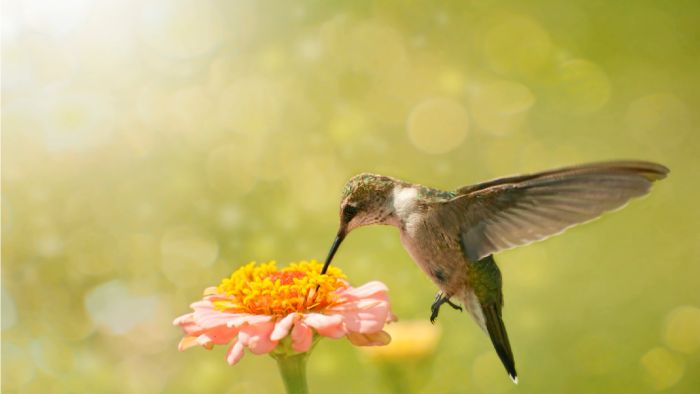 Many will agree that each bird is characterized by its own plumage and that there is no ugly one. We, on the other hand, believe that every species of bird is beautiful in its own way, however, in our opinion, hummingbirds ’overall iridescent plumage is unique. What we especially adore are their brightly colored throats or gorgets. The difference between males and females is striking, at least when it comes to plumage. Namely, the females are much paler but still show their amazing, iridescent colors.

A fast metabolism is one of the main features that make a huge difference between hummingbirds and all other bird species. These cute birds have an incredibly fast metabolism for one simple reason, their body really needs a lot of energy to be able to move and perform basic life functions. Hummingbirds need efficient energy conversion in order to sustain their rapid heart rate as well as wing speed.

Now that you know the answer to the question “are hummingbirds birds or insects,” let’s explain why it couldn’t be the opposite. 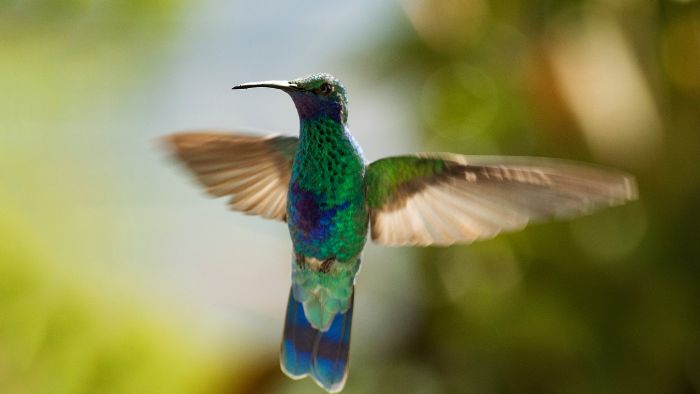 Insects belong to the phylum Arthropoda and have three pairs of jointed legs, segmented bodies, an exoskeleton, one pair of antennae, and let’s not forget, one or two pairs of wings. Accordingly, when you read this, most people will probably think of butterflies rather than hummingbirds.

When you consider the number of species, adaptability, and wide distribution, you will not go wrong if you say that insects are one of the most successful groups of all animals. They dominate our land, namely, there are about 1 million described species meaning that they make up about three-fourths of all described animal species in the world. But scientists don’t stop at just that number because they believe the actual number could be as high as 5 to 10 million.

To Conclude: Are Hummingbirds Birds Or Insects?

Hummingbirds are amazing creatures about which more and more interesting information is being learned day by day. Most people, especially those who encounter these flying beauties for the first time, are simply bothered by the fact that it is even possible that hummingbirds are birds and not insects.

By this act, Mother Nature once again confirms how truly amazing and unpredictable she is. We hope you found this article useful!

Did you know the correct answer to the question “are hummingbirds birds or insects” even before you read this article? Tell us more in the section below.

Recommended: Can Hummingbirds See At Night? The Most Amazing Facts About The Anatomy Of Their Eye

What Kind Of Animal Is A Hummingbird?

In short, hummingbirds are birds that originate from the biological family Trochilidae. Experts call them the smallest birds in the world, which is no wonder because most of the 350 known species are measured in the range of 3 "-5".

What Is The Difference Between a Bird And a Hummingbird?

One of the main and also the most interesting differences between hummingbirds and other birds is that hummingbirds fly backward. In addition, every experienced birder will recognize them by the characteristic humming sound that is actually created by the movement of their wings.

Are Hummingbirds Part Of The Bird Family?

That's right, hummingbirds are birds belonging to the Trochilidae family.

Are Butterflies Birds Or Insects?

Butterflies have six legs and three main body parts, specifically the head, thorax, and abdomen, but we must not forget to mention two antennae and an exoskeleton. We can freely conclude that they look like any average insect, and they, like other moths, belong to the same insect group called Lepidoptera. Accordingly, yes, butterflies are insects.