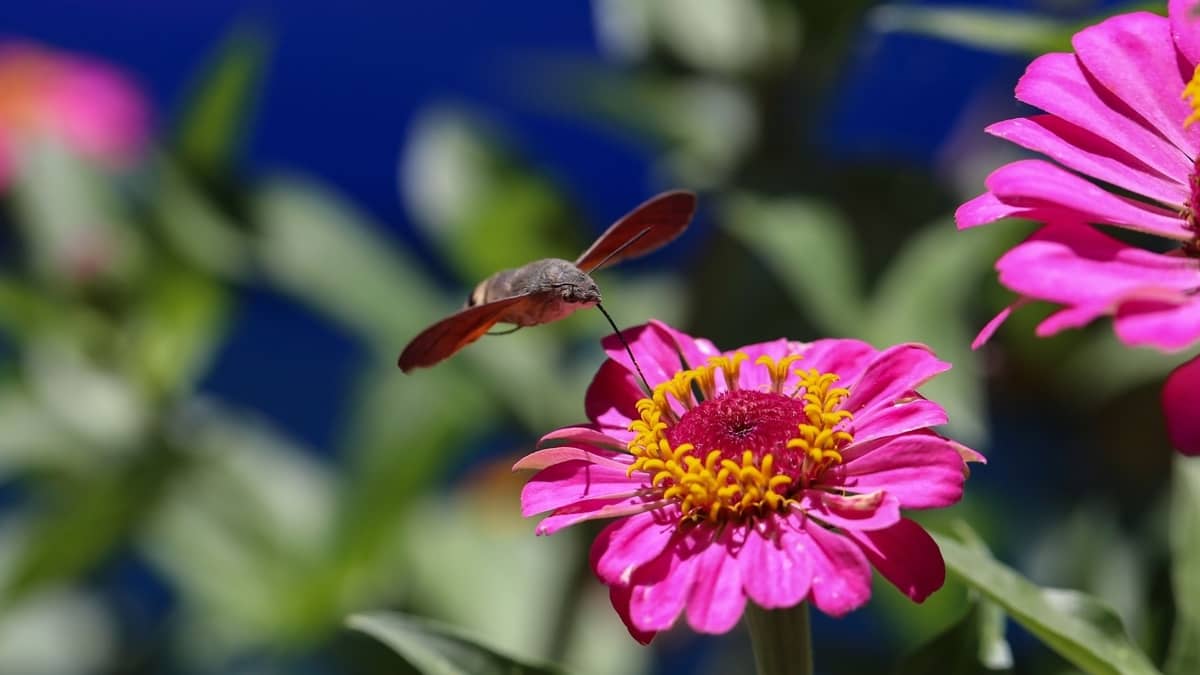 Are there hummingbirds in England? Keep reading and find out if you see a real hummingbird or a little insidious decoy.

Hummingbirds are one of the most fascinating species for bird lovers the world over. They can be seen all over the world, but it is certainly interesting to note that they are native to the New World and you will not find them outside the Western Hemisphere.

Many people wonder are there hummingbirds in England. Therefore, stay with us and find out the answer to this enigma.

Are There Hummingbirds In England?

In the UK you can spot a beautiful creature called the hummingbird hawk-moth. This species is a regular visitor to this country and most importantly can be seen sometime every year and has been recorded in every county all the way to the Orkney and Shetland Islands.

Although technically not a hummingbird, this little creature is very reminiscent of them. It is the so-called summer visitor of this country, who comes from southern Europe in varying numbers every year. It is abundantly inhabited throughout the Mediterranean countries, as well as across Central Asia to Japan.

The larvae of hummingbird hawk moth breeds can mostly be found in July and August and can grow up to 60mm in length. They have a very interesting look, namely, they are quite colorful. They are recognizable by their green or reddish-brown body which has white dots and dark, white and yellow stripes, black spiracles as well as a characteristic blue yellow-tipped horn. 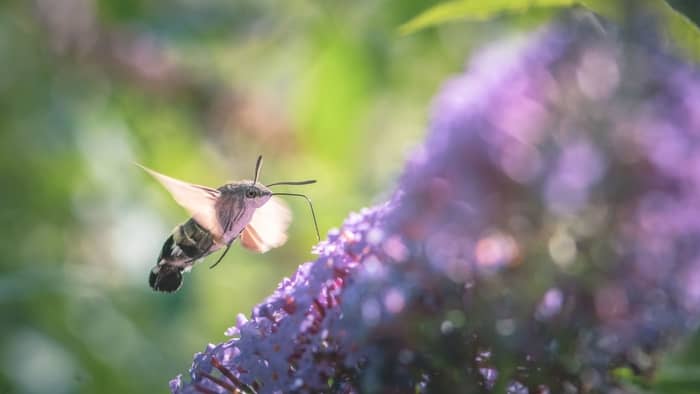 This little creature is very swift on the wing and an expert hoverer. They are easily recognizable, precisely by the way they fly because their wings beat so fast that they produce an audible hum and can only be seen as a haze.

Many also wonder are there hummingbirds in England during the winter, and the answer is no. These creatures are delicate and find it difficult to tolerate cold winter conditions. Furthermore, the hummingbird hawk-moth prefers to fly in bright sunlight. However, you should not be sad because there is still a chance that you will notice them in other circumstances, namely, they will also take the wing in dull weather, at dusk or dawn, and on some occasions even at night.

This intriguing species can travel as fast as 12mph and is quite robust as it has the ability to fly and feed in most weather conditions, even rain. They are attracted to nectar-rich flowers such as red valerian, honeysuckle, jasmine, Buddleia, lilac, Escallonia, petunia, and phlox. As for feeding, the hummingbird hawk-moth hovers in front of a flower, probes it repeatedly for nectar, and then darts to the next flower. The most interesting thing is that he has an extremely good memory. Namely, they return to the same feeding beds at about the same time every day.

Where To Spot Them? 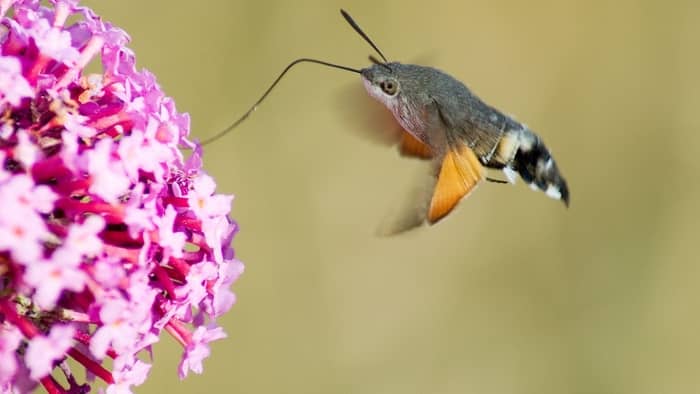 Now that you’ve got the answer to the question “are there hummingbirds in England”, it’s time to give you tips on where you can spot them. The number of Hummingbird hawk-moths that make it to the UK varies from year to year. Their number depends on population size, as well as temperature and wind direction.

The good news is that you don’t have to go far if you want to observe these beautiful little creatures. You can spot them all around you, most often along woodland edges, and on heathland and scrub. Also, if you put in a little effort, you will be able to spot those more mature individuals resting on stones, walls, and rock faces where their cryptic markings help them avoid the attention of predators.

Every year, many people are surprised to see these beautiful creatures flying through their backyard. This confusingly enormous hummingbird hawk-moth is likely to become a regular fixture in British gardens. Although it may seem like a hummingbird at first, check carefully because one closer look reveals this “imposter” as a hummingbird hawk moth.

Finally, that would be it, now you know the answer to the question “are there hummingbirds in England”.

Have you ever seen this interesting moth in your garden? Write us your answers in the section below. We are looking forward to your reply. 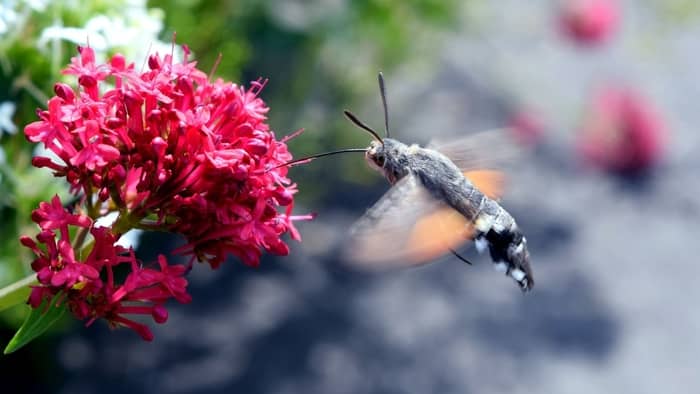 Where Can You See Hummingbirds In The UK?

Unfortunately, you will not have the opportunity to see hummingbirds in the UK. Indeed, they have never been found in the wild anywhere in Europe. In case you notice something very similar to a hummingbird, it is most likely a hummingbird hawk-moth. This species of moth is at first incredibly similar to the famous American bird, so it’s no surprise that people often confuse them.

Furthermore, the hummingbird hawk moths can be spotted across the country, from the Orkney and Shetland Islands. Best of all, you don’t need to go beyond your own backyard.

Why Are There No Hummingbirds In Europe?

Simply put, you will never see hummingbirds in Europe because it is a continent with too unsuitable a climate for them. Truth be told, according to research, hummingbirds do originate from Europe around 40 million years ago. This is supported by the fact that the oldest modern hummingbird was discovered in Germany, and it lived more than 30 million years ago.

It is not yet known why they decided to emigrate to America, nor how they did so. Scientists are still looking for answers to questions. However, only one thing is known, when they finally came to American soil or better yet, into the air, hummingbirds had found little competition and were able to spread and settle quickly.

Can You Keep Hummingbirds In The UK?

Given that they currently live almost exclusively on the American continent, hummingbirds are very difficult to keep in captivity and therefore only a small number of zoos in the UK keep them.

Furthermore, those zoos that have decided to take this step to keep only those larger, easier species. As for private keeping (as a pet) try to check what the law is. Namely, in most states, it is illegal to hold a hummingbird, a hummingbird nest, a hummingbird baby, as well as any part of a hummingbird, nest, or egg, in any type of captivity.