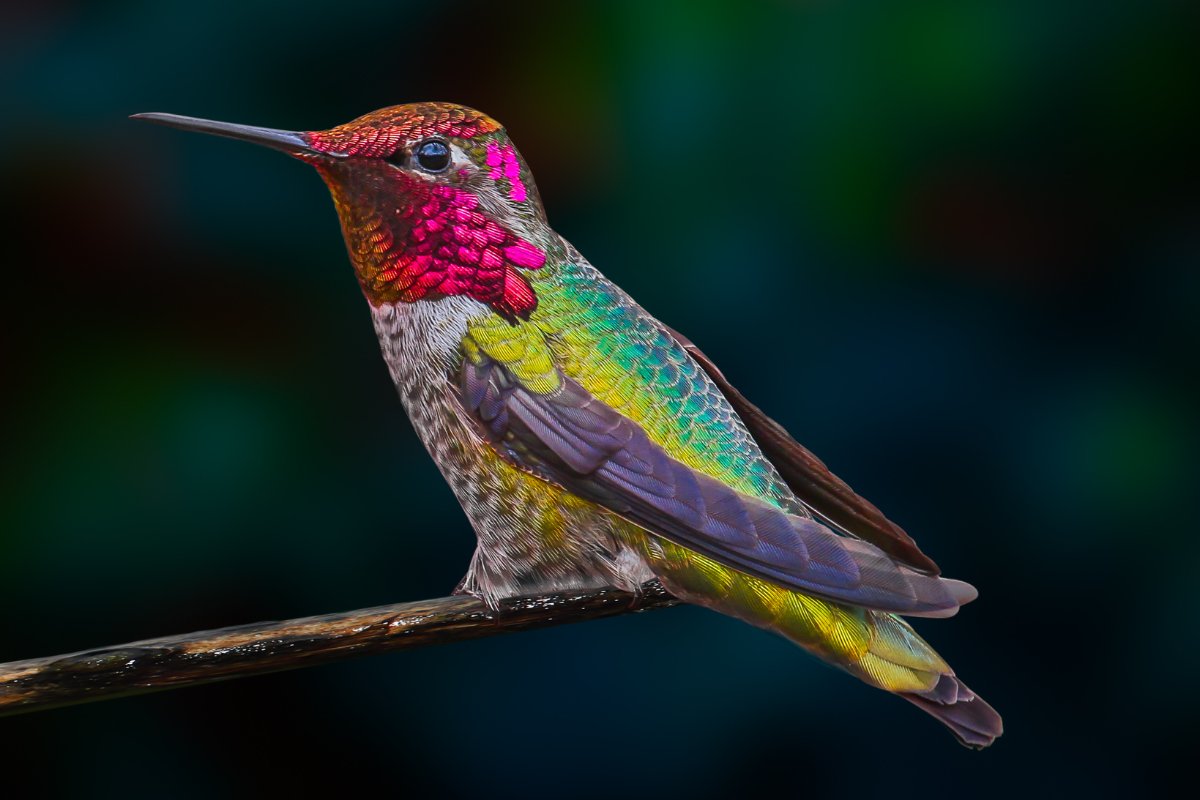 Do hummingbirds change colors? Find out the answer to one of the most interesting questions we have ever received.

Hummingbirds are the smallest birds not only in North America but all over the world. Did you know that the smallest of them weighs significantly less than the lightest coin? However, that doesn’t stop them from living the most exciting life ever. They have the ability to perform various acrobatics, and their body can withstand the pressure of G-forces that would knock out even the most experienced pilots.

But that is not the topic we are going to talk about today. We decided to dedicate this article to their radiantly bright, glittering plumage, and try to answer the question “do hummingbirds change colors” last night. So, if you are ready to learn and find out more about science and hummingbirds’ iridescent plumage, read through the post!

Research That Changed The Perception Of Bird Plumage

Before you find out the answer to the question “do hummingbirds change colors”, are you in the mood for a little science? Trust us, you won’t regret it because it is not boring. You might even end up with your mouth wide open!

Looking around at the many species of birds out there, it’s not hard to tell that most of them are earth tones. Therefore, mostly brown, gray-green and even black tones prevail. Notwithstanding, to keep the world from being monotonous and therefore boring, Mother Nature conspired to spice things up a bit and create flying creatures that are strikingly bright and colorful in tones that can vary from orange to red and pink.

Can you guess who we are talking about? Bingo, of course, it’s about the most unique creatures in the world, tiny hummingbirds. Based on research conducted by Yale ornithologist Richard Prum and his team of assistants and experts, it has been proven that hummingbirds exceed all other bird species in their color palette.

Namely, experts have been researching the molecules and nanostructures that give many species of birds their richly colored feathers for a long time, but as they themselves have admitted countless times, nothing could have prepared them for the knowledge they came to. The results of this research changed the view of the entire bird kingdom.

Not to be outdone, when everything is added and subtracted, hummingbirds actually rival all other birds combined. Moreover, it turned out that everything we were convinced of until then was far from the truth.

Experts from Yale were shocked when they discovered that the diversity of bird-visible colors in the world’s smallest bird’s plumages greatly exceeds the known diversity of colors found in the plumages of all other bird species. As a result, this knowledge led to a massive increase in the total number of known feather colors visible to birds by an incredible 56%.

You can find out more about the research itself with one simple click here. Now that we have hopefully swept you off your feet, it is finally time to find out the answer to the question “do hummingbirds change colors”. Therefore, let’s go into detail.

Read more about Do Hummingbirds Play? Is There Friendship Between Rivals?

We have to admit that you are not the only ones who often think about it. People sometimes literally feel like they can’t believe their eyes because these birds seem to change color by the minute.

It is important to emphasize that most birds, once they are fully fledged and have formed their adult plumage feathers, remain the same color characteristic of the species to which they belong. Hummingbirds are, as usual, a completely different story, because they have a higher ratio of feathers than other birds do, approximately 900 of them. Can you guess where this story is going? If you can’t, that is okay, we will explain in more detail.

So, do hummingbirds change colors? The answer to this question is negative, these birds can have characteristic, bright colors, but they can never change them to another. If they are dark green, that is their lifelong color, they cannot all turn orange at once.

The Science Stuff Behind The Phenomenon

Even the most colorful hummingbird is the way it is, it can’t be any different than this afternoon because it decided so. You probably find it strange because you have seen with your own eyes that the bird literally changes color while flying. Don’t worry, you haven’t lost your mind, the culprit is the sun.

The thing is that with every slight movement of the body and its iridescent feathers, the sun’s rays fall at different angles, thus determining the color we see, and making it change spectacularly. Did you feel sad now that you realized that it was all an illusion? Don’t be because these wise birds actually use the sun to create the best colorful display to attract females.

What Colors Are Hummingbirds?

Just like all other birds, hummingbirds can be any color, but they definitely stand out. The most unique colors which we can see are metallic bronze, copper red, metallic green, and pink/golden red. The standard ones that almost every small hummer has at least on the smallest part of the body are: purple, white, gray, and blue.

Yes, males are much more colorful than females. The point is not in the number of different colors, but in the fact that males have brighter colors, unlike females, which usually predominate in brown or green feathers.

Therefore, mothers don’t like it when fathers stay near the nest with their babies because they are afraid that their feathers will attract predators.

Recently, a confused reader asked us “do female hummingbirds have color?” because his friends told him that males have much more color than females and that they are almost invisible. His friends were wrong. As we said, females have color, but it is much paler to make them less noticeable to predators.

To Round-Up: Do Hummingbirds Change Colors?

No, hummingbirds don’t change their colors, it’s actually an optical illusion because, with every slight movement of their bodies and their flowing feathers, the sun’s rays fall at different angles and thus determine the color we see, making it seem like they are changing.

Recommended: How Long Do Hummingbirds Sit On Their Eggs?