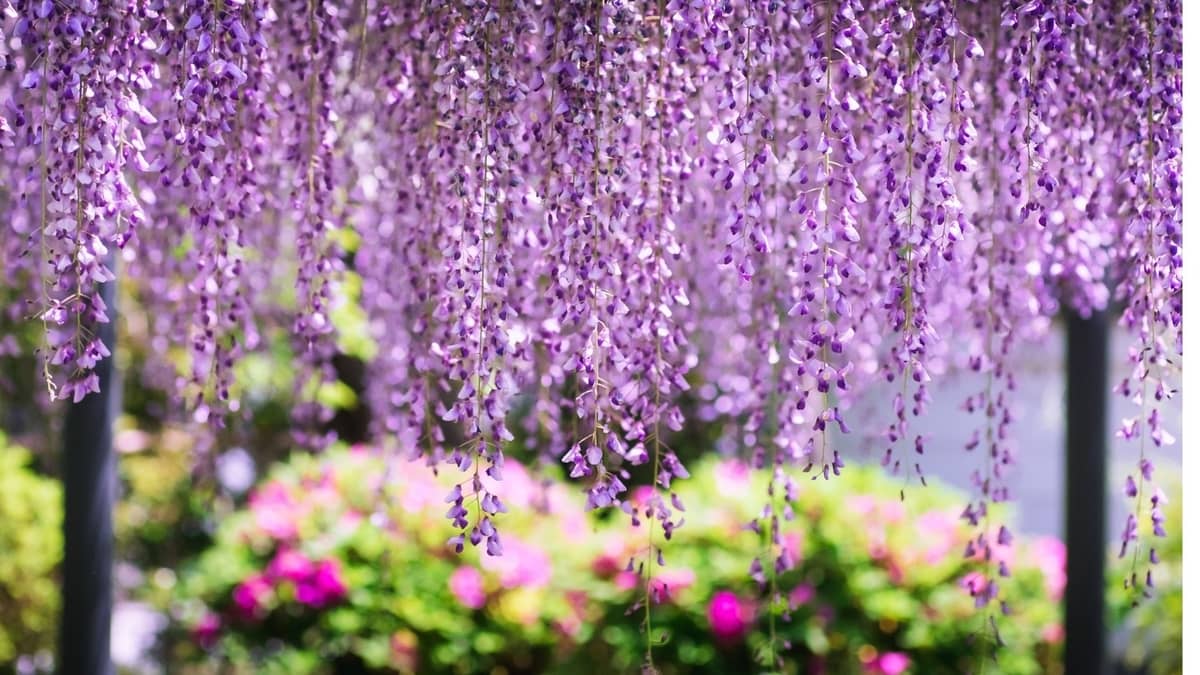 The question is we would like to know is: does wisteria attract bees? Wisteria is a type of high climbing or vining plant that tends to grow so large. This woody vining plant can grow more than 25 feet.

Wisteria plant is also characterized by feather compound toothless leaves. The fact that this woody flowering plant has the ability to grow as so large, it can definitely hide or accommodate its shares of insects.

Therefore, insects such as bees, wasps, and the likes can find shelter and even lay their eggs in this wisteria plant. So, it is not uncommon for wisteria plants to attract bees.

Now, let’s dive in and get some information about how wisteria attracts insects such as bees or wasps.

Some Info About Wisteria Plant

Before we look into if wisteria attracts bees, let’s firstly discuss some info about them. Wisteria is vigorous gorgeous climbers that can give rise to fragrant mauve (pale to moderate greyish violet color) or white blooms in late spring.

This plant is native to China, Japan, Korea, Southern Canada, and the eastern United States. It includes ten species of woody twining vines. This climbing vigorous plant was later introduced to France, Germany, and different other countries found in Europe. 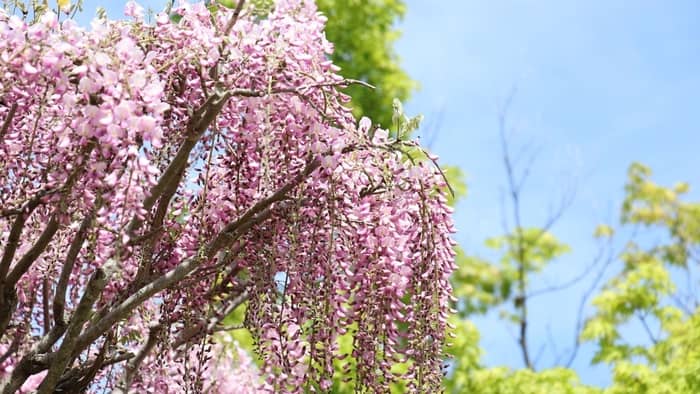 All the 3 mentioned above wisteria species are vigorous growers that are capable of attaining around 10m (33 feet) in trees or they can spread up to 20m (66ft) against a wall.

However, you can alternatively train your wisteria plant to be free-standing in the border or in a big container.

It is a fairly easy plant to grow and apart from majorly blooming in spring, the plant can also occasionally bloom in summer. Wisteria plant is best planted or grown in spring or autumn. Therefore, this plant is a sun-loving plant so the ideal spot to grow your plant should be south and west-facing walls.

Once you have commenced planting the wisteria plant, flowering mostly begins in about 3 to 4 years of planting.

This wonderful plant can live up to 100 years or even more. In fact, it’s been said that there is a 1,200 years old wisteria tree found in Japan today. This gives the plant a special symbolism of long life and immortality. 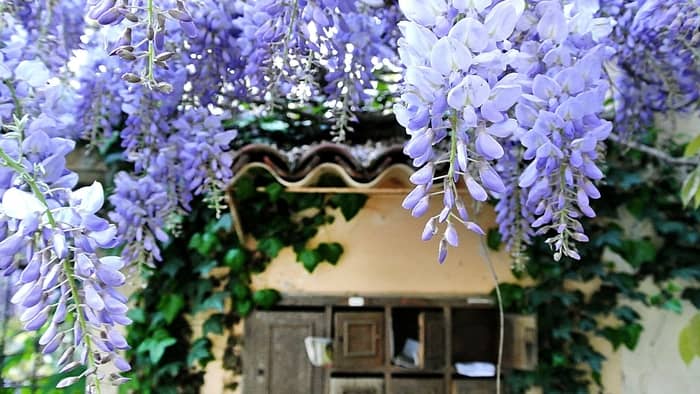 So, to the question: does wisteria attract bees? Let’s give you an answer to this. Now, from the above explanation, it is easy to deduce that wisteria can attract bees as well as other insects.

It is logical for the wisteria plant to attract bees and other insects because of the plant’s abundance of bloom and pungent fragrance. Therefore, some of the bees as well as other insects can have the chance of seeking nectar as well as finding a protective hiding spot.

Read more about Perennial Morning Glory: Why Hummingbirds Love It

Just like bees, wisteria also attracts wasps. Wasp finds it so easy and comfortable to nest in or around the heavy plant of wisteria. Because of the multiple blossoms, this tends to provide shelter or protection as well as foraging space for this insect and its offspring.

Wasp lay their eggs inside aphids- which is a known pest of wisteria plant. But wasp isn’t a pest of the wisteria plant. Once the eggs hatch, the larvae eat the aphids from the inside.

Some Issues You May Encounter Growing Wisteria 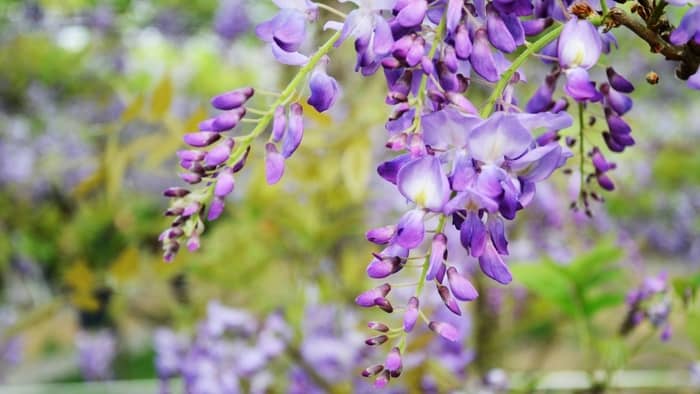 Wisteria is a very ambitious plant that grows so vigorously or abundantly and gardeners tend to grow this plant because of its hardiness, showy flower display, as well as their longevity.

Although wisteria tends to grow beautifully and ambitiously when you have it in your garden, there are however some issues you may encounter growing wisteria plants. This vigorous and gorgeous plant grows so fast that it can turn out to be a garden issue.

When wisteria plant is supplied with full sunlight, well-drained soil, and other appropriate conditions, they can grow in an uncontrollable manner that can give gardeners headaches. When this long-living plant grows so large and heavy, it can have the ability to crush other plants close to them or even supporting structures.

Again, the strong and extensive root system of wisteria plant can easily break through concretes as time goes on. When unattended, they can grow so large that they can cause destruction.

Because of the aggressive nature of the wisteria plant, Florida has declared this plant invasive species.

Before you plan to grow any species of wisteria, make sure it is allowed in your location. You will also need to ensure you are committed to the extensive and preventive care this plant needs. 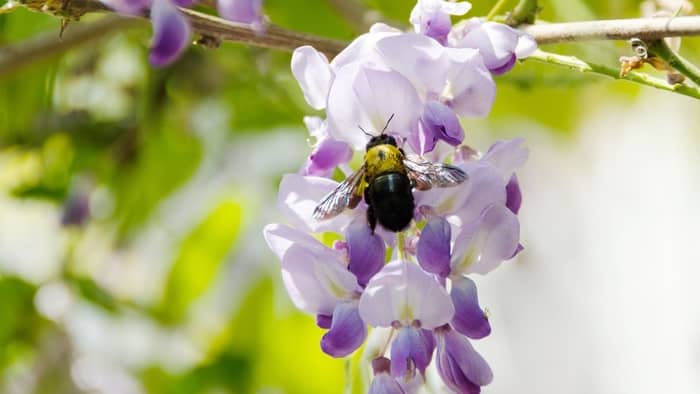 There are things you can do to help minimize the issues you may encounter with growing wisteria. The first and important thing to note that can help you is adequate trimming. Another step to minimize wisteria’s uncontrolled growth is by collecting their seeds as they grow and yield seeds.

Religious trimming can help prevent this plant from growing out of control and causing any destruction in your garden or even to your neighbor’s property. Trimming your wisteria plant religiously means shortening or cutting off excessive whippy growth.

Wisteria is a vigorous plant that can supply bees with reliable food such as nectar. Hence, bees are attracted to wisteria plants.

So, we hope we’ve been able to answer your question: does wisteria attract bees?

Yes. Bee like wisteria plants because they provide reliable food sources such as nectar. Insects such as bees are also pollinators for this vigorous plant so bees can also be helpful to the wisteria plant.

What insects does wisteria attract?

Wisteria attracts different species of insects because of how the plant grows so vigorously and huge. So, insects that are attracted to the wisteria plant include wasps, aphids, scales, longhorned borers, bees, and so on. Their abundant flowers and strong smell also add to why different insects are attracted to this plant.

Does wisteria have nectar?

The robust wisteria plant has nectar producing flowers and this is what most insects that are attracted to this wisteria plant seek for. The flower nectar of this plant offers nectar near the surface of the flower. However, the petals flower needs to be moved partially to reach the nectar.

Are Wisteria good for pollinators?

Yes. Wisteria plants attract pollinating insects such as bees and wasps. They also attract other pollinating birds such as hummingbirds.