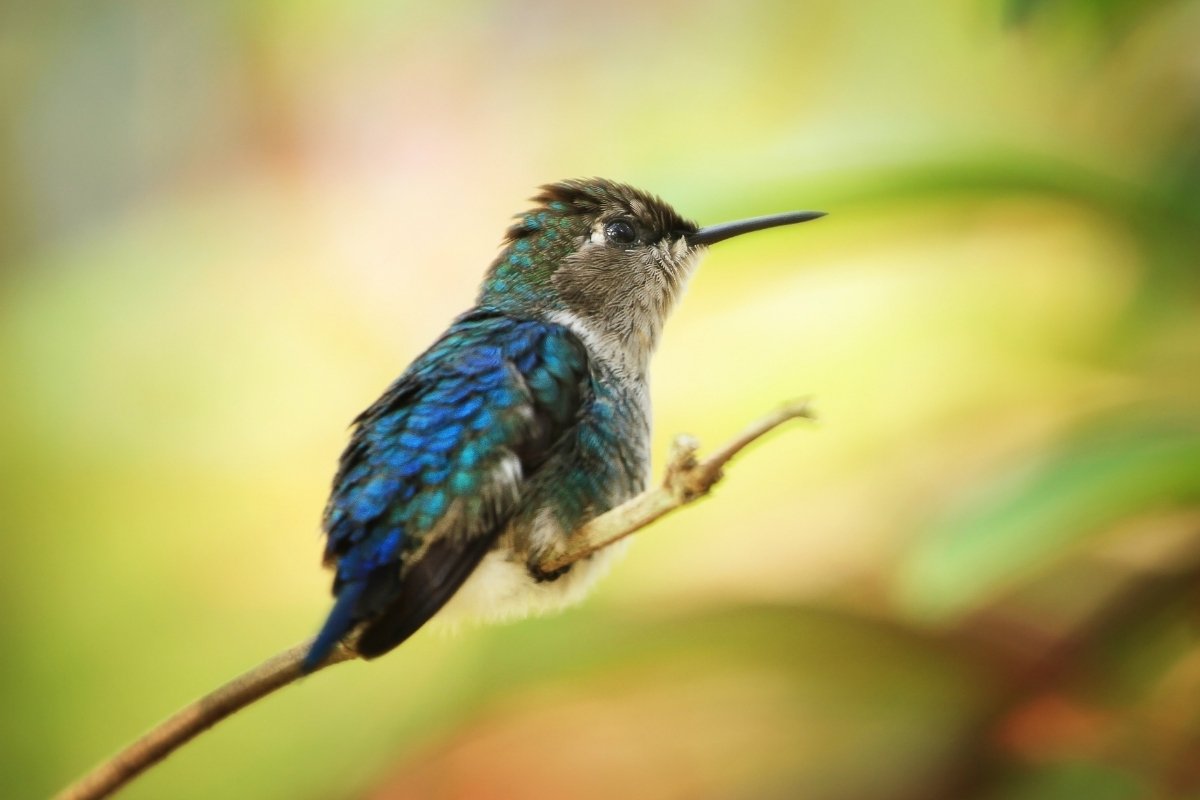 Hummingbirds are unique flyers, but their folded wing anatomy allows them to perform impressive acrobatic movements, unlike other birds.

The hummingbird’s wing moves in non-standard ways, allowing the bird to hover easily from one point to another and even perform somersaults. The hummer’s body has evolved and strengthened in the sections responsible for flying. Their chest accounts for is 1/4 of their overall weight!

Surprisingly their folded wing anatomy is no different than most birds. So what makes them such good flyers?

The Anatomy Of The Hummingbird Wing

The secondary feathers overlap with the primary feathers and are attached to the bird’s arm bones. When analyzing the folded wing anatomy, both types of feathers look well stacked. But how does a birds wing fold? When the bird stops flying, it activates the arm bones and folds the wings.

Depending on the type of hummingbird, the tips of the folded wing might expand over its body.

The folded wing anatomy of the hummingbird tells us they’re no different than other birds. So how are they capable of flying in such patterns?

One reason is the hummingbird’s shoulder joint. It’s made out of a ball and socket. This allows the bird to rotate its wings in a horizontal figure 8 pattern, or oval form, reaching 180 degrees in each direction.

1. Hummingbirds Fly Forward, Backward, Up And Down

Hummingbirds are the only species in the world that can fly backward, up, and down. This is due to their ability to rotate the wings up to 180 degrees.

Most birds fly upwards only when they do a downwards flap. But the hummingbird’s wings don’t flex when transitioning from a downward stroke to an upward stroke. Instead, the wings rotate around their axis and aerodynamically spread during the upstroke.

2. Hummingbirds Can Hover For Extended Periods

Hummingbirds spend 90% of their daytime hovering over feeders and flowers. Hovering spends most of their calories, and not many birds can do it. In fact, research has found that the flight pattern of the hummingbirds is closer to that of dragonflies and other insects.

The hummingbird moves its wings only horizontally in figure 8 shape during hovering. This allows it to stay in the air without drastically changing its position.

Somersaults were probably one of the most challenging aerobic exercises you had to do, but they come naturally to hummingbirds.

The hummers’ ability to fly backward allows them to flip in mid-air seamlessly. They often do this when hovering among flowers or to avoid an obstacle.

Most birds fly by flapping their wings. They expand their wings and fold them, managing their way through the air. The folded wing anatomy doesn’t allow the hummingbird to fly. However, there’s one exception, Anna’s hummingbird courtship dive.

During the mating period, male hummingbirds dance to impress the females. In this kind, the male flies upwards until you can’t spot it. Then it folds its wings and dives at around 60 mph. The folded wing anatomy allows it to reach this speed and set out a fantastic performance.

What is it called when birds fold their wings to move? That’s flapping. We often see statements that hummingbirds flap their wings, but in fact, they don’t. The hummers twist their arm at the joint and move the wing in an oval shape instead of flapping and folding.

So how do you make a bird wing fold? The hummingbird’s wings don’t bend. They’re stiff and separated into sections connected to their arm bones. When the bird wants to stop, it engages the arm muscles and folds the wing.

When looking at the folded wing anatomy of the hummingbird, it’s hard to guess their capability. However, hummingbirds are among the best flyer among all birds; they can fly up, down, and backward!

Their wings are connected to the body with a ball and socket joint, which provides a 180-degree movement. This allows the hummingbirds to hover in place and fly horizontally instead of only upwards like most birds.

What is it called when birds fold their wings?

The act of bird's folding their wings is called flapping and helps them fly. By flapping they get an additional push that takes them forward.

How does a birds wing fold?

The wing is connected to the hand and arm bones of the bird. They simply activate the muscles attached to these bones and retract the wing to fold it.

How do you make a bird wing fold?

The bird's wings are naturally in a folded position, just like our arms fall naturally beside our bodies. To unfold or spread, the bird engages the chest muscles and stretches the wings.