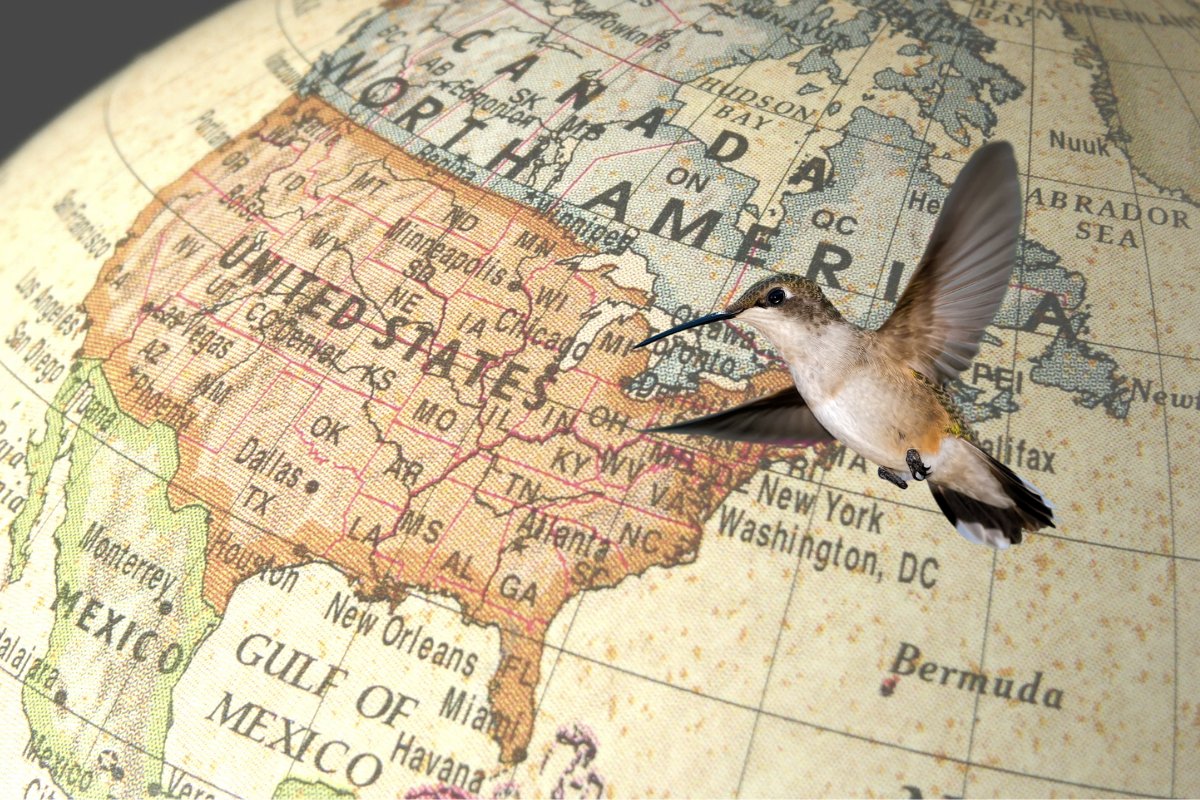 How far north do hummingbirds go? Check out this article and find out if distant Alaska has the honor of hosting these birds.

Hummingbirds are truly one of the world’s wondrous creatures. They are the smallest birds, can fly hundreds of miles without rest, and visit between 1,000 and 2,000 different flowers a day to feast, feed, and rest. Do you know what’s best of all? They are naturally brightly colored, and when the sun’s rays shine on their iridescent feathers, it seems to us that they take on a different color with every movement of their bodies.

These birds make two migrations every year, one to the north and then the other to the south. We know that they occupy almost all of North America during the summer months, but how far north do hummingbirds go? Keep reading this article to find out.

Before you find out “how far north do hummingbirds go”, let us explain where the need for migration comes from. According to the official data we were able to obtain, there are currently 300 recognized hummingbird species, of which less than 15 regularly migrate to the US, and more importantly, even fewer continue their journey further north into Canada.

Did you know that there is a belief that the first hummingbirds arrived from Asia 22 million years ago? After they arrived, they bred and spread in South America, and only centuries later they decided to migrate from Central America to the mainland of North America. It’s no wonder that some of them decided to separate themselves from their “relatives and friends” because that way they had less competition for food and territory.

But, as you can guess, with the end of summer and the arrival of colder weather, these “escaped” species have been returning to their home every year. And that, ladies and gentlemen, laid the foundations for what we will talk about today, and that is, their migration pattern.

Read more about Brown Sugar For Hummingbirds: Give It A Chance Or Run Away?

How Far Do Hummingbirds Migrate?

To be fair, this is a topic we could write almost an entire book about, but we will resist that urge this time.

Basically, try to picture this bird in your head, the average specimen weighs literally less than a dime. Now imagine that little hero who once a year decides to fly across space from the Yucatan Peninsula and Central America to his breeding grounds in North America. Sound like an impossible mission? Well, you are wrong this time.

To make things even more fascinating, some of them have a direct flight over the Gulf of Mexico, a distance of almost 500 miles, and the craziest thing is that the flight is non-stop! This is just one of the confirmations of how crazy and smart these creatures are at the same time. They are so small, yet so strong and able to endure and, most importantly, survive these long journeys year after year.

When Do Hummingbirds Migrate North?

It is no secret that these birds never use watches, calendars, or text alerts to remind themselves that it is time to leave their territory. Having said that, does it seem to you that these birds usually appear and disappear on almost the same dates?

It is a matter of their inner feeling. These birds decide when to migrate based on the total amount of daylight each day, as well as the angle at which the sun shines. In addition, there are some, let’s call them minor factors that also have a strong influence on their departure, namely the availability of food sources and climate patterns.

The Hummingbird Book: The Complete Guide

Furthermore, it is important to emphasize that not all birds start their journey at the same time, given that each species has its own areas, migration routes, and habitat needs. There aren’t too many differences in the starting time, but they still exist.

The longer the migration path, the earlier it is necessary to start the journey. Accordingly, those whose journey is longer will start already in mid-February or early March and will arrive at their destination in May or early June.

Some people have some pretty interesting hobbies, and the one we honestly like the most involves creating our own hummingbird calendars by tracking their migration schedules from year to year. Did you know you can become one of them? All you have to do is grab a notebook and pen and write down the date as well as the type of hummingbird you encountered. Don’t be frugal, the more details you include, the more accurate the calendar will be in the end.

How Far North Do Hummingbirds Go?

As you already know, when the weather gets colder, hummingbirds migrate to places where food is plentiful. Their journey north begins in the spring when they finally go to their favorite breeding grounds throughout the United States as well as Canada. This multi-month journey serves the migratory species of these birds as a kind of escape from the tropics, where the competition for food can be quite intense and combative, and even fatal.

So, how far north do hummingbirds go? The longest hummingbird migration distance is an incredible 3,000 miles. Are you wondering who is the hero whose wings can withstand such a journey? It is a small, and yet so daring and strong Rufous Hummingbird. Namely, this bird has its northern breeding grounds in Alaska, and winters in Mexico every year. This is just one of the incredible hummingbirds migration routes. Trust us, these birds are unique in every aspect.

If you want to know more about this year’s hummingbirds migration routes and patterns, feel free to take a look at this article.

To Conclude: How Far North Do Hummingbirds Go?

The longest hummingbird migration distance is crossed twice a year by the famous Rufous Hummingbird. This amazing bird can fly 3,000 miles to reach its breeding grounds in faraway Alaska.

That’s it, now you know how far north do hummingbirds go. Have any questions? Don’t hesitate to let us know in the comment section below.

Read more: How Long Can Hummingbirds Fly? Disclaimer: More Than You Can Expect