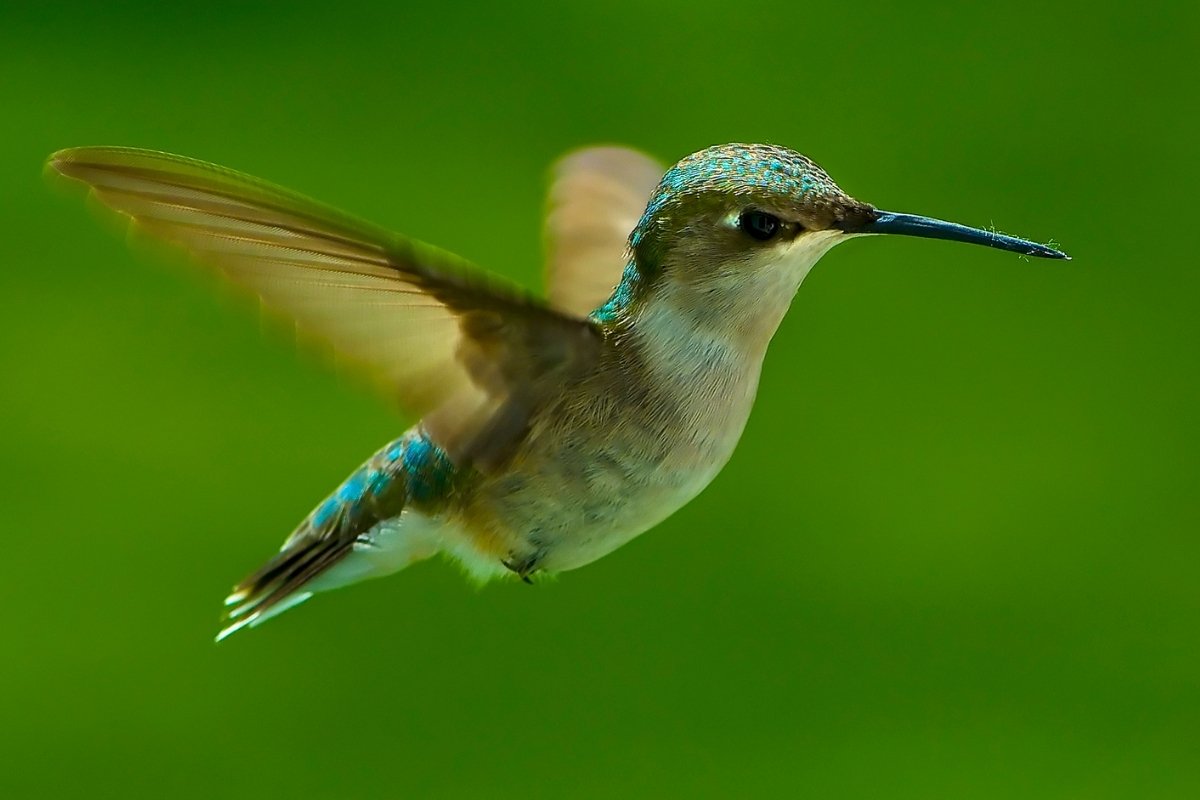 Last Updated on September 7, 2022 by Cristina

Are you wondering how fast do hummingbirds fly? Let’s find out below!

If you ever come across a hummingbird exploring your yard, you’ll likely notice its amazing acrobatic abilities. It is simply impossible for us to follow them with our eyes as if they are everywhere at the same time.

Therefore, many would like to know how fast hummingbirds fly. If you are one of them, stay here and find out many interesting facts about these remarkable creatures below.

A Few Fun Facts About Their Flight

Before you find out the answer to the question: “how fast do hummingbirds fly?”, let us tell you a few facts that made us love these mesmerizing creatures.

Hummingbirds have much fewer feathers than any other bird, not only because of their size, but the reason is very simple, fewer feathers allow them to fly more easily. In addition, they are also known as the only species of bird that has the ability to hover. Hovering allows them to actually stay in one place without moving forward or backward, or even going up or down.

Thanks to the very advanced technology and cameras of the 21st century, experts have been given the opportunity to precisely measure and study the wing movements of these smallest birds in the world. Accordingly, it was concluded that they flap their wings between 10 and 80 times per second just while hovering. However, that’s not all, as they flap their wings even faster during courtship.

How Fast Do Hummingbirds Fly?

Now we come to the main part of this article, that is, the answer to the question of “how fast do hummingbirds fly?”. Let’s find out. Namely, these birds can reach a speed of 20 to 30 miles per hour on a daily basis, and in some situations that require proof of masculinity, even more than that.

What particularly impressed us was the fact that these unique creatures can fly backward at over 30 miles per hour. INCREDIBLE!

Although it sounds impossible, it is very easy for these birds to achieve such high speeds because the shape and size of their wings help them generate a huge amount of power. Although it sounds impossible, these birds easily reach the fastest speeds in the animal kingdom simply because of the shape and size of their wings that help them generate enormous amounts of energy.

Did you know that hummingbirds experience an acceleration force almost nine times greater than gravity while diving? Maybe that doesn’t mean anything to you right now, but keep in mind that it’s actually the highest recorded result for any vertebrate. To be honest, most pilots who undergo a voluntary air maneuver pass out when they experience the 7-G force.

Does The Speed Make Them Tired?

Unfortunately, this leaves considerable consequences in the form of fatigue in these birds. This is because tiny bodies don’t have enough energy from food to keep up with all the high-level activity. Did you know that hummingbirds usually lose half of their body weight while migrating? Fortunately, weight loss is very easy to make up with a few meals once they reach their destination.

It is also important to remember that hummingbirds need to stay active as long as possible just to stay warm during cold weather conditions. However, in severe winter conditions, they completely stop their activities and fall into a state of torpor, in which they remain as long as the cold lasts, that is until it becomes warm enough to continue their daily life.

To Conclude: How Fast Do Hummingbirds Fly?

Comparing their size, wingspan, and weight, it can be concluded that hummingbirds are the fastest animals on Earth. Moreover, with their size, they can unquestionably surpass fighter jets and the space shuttle! These mighty creatures can reach a speed of 20 to 30 miles per hour on a daily basis. Amazing isn’t it?

What Is The Fastest Flying Hummingbird?

Based on research conducted by Christopher James Clark at UC Berkeley, it was discovered that the male Anna's hummingbird actually folds its wings to the side during courtship. This act allows him to reach a velocity of approximately 90 feet per second, or in other words 60 miles per hour. It is important to emphasize that this is also the highest recorded speed for a vertebrate of that size.

What a very small percentage of people think about is the acceleration and deceleration during such dives, namely the birds experience G-force so strong that it would almost certainly cause most people to pass out, and on the other hand, this is something completely normal for these birds.

How Fast Do Hummingbirds Wings Flap Per Minute?

A hummingbird's wings beat somewhere between 10 and 200 beats per second, depending on several factors, among which the species of bird, surroundings, as well as direction, and purpose of flight play a major role.

The American Crow flaps its wings 20 times in 10 seconds.

The European Starling flaps its wings 20 times in 45 seconds.

The Rock Pigeon flaps its wings 30 times in 10 seconds.

The broad-tailed hummingbird flaps its wings 500 times in 10 seconds.

Why Do Hummingbirds Fly Fast?

It’s very simple, as hummingbirds are extremely small and represent an excellent source of protein and a quick snack for all other predators. This is precisely why their flying abilities enable them to survive even in hopeless situations.

Just like all other birds, hummingbirds migrate south in search of food. The largest percentage of these birds do this at the end of summer and the beginning of autumn, just when the temperatures become lower and the days significantly shorter.