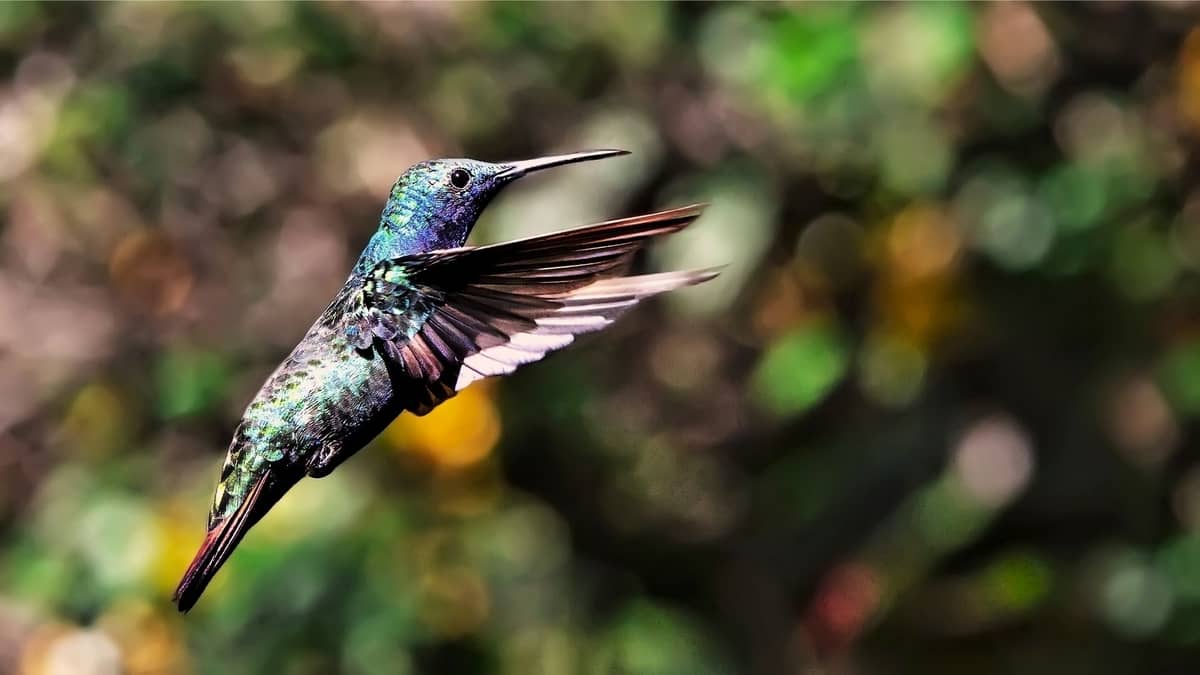 Today we will be looking at some facts on how high hummingbirds do fly. Hummingbirds are simply fascinating and outstanding birds that possess captivating skills. The sweet hummers are known to be vigorous and fast creatures with interesting attributes.

They are the only talented birds capable of flying forward, backward, as well as sideways. Hummingbirds are the only smallest migrating birds capable of traveling very long distances at a go. Their wings can be moved in a figure-eight motion allowing them to move backward easily while they are in motion in the air.

With these great flying attributes hummingbirds possess, people may wonder how high do hummingbirds fly. Not to worry because this is what we will be looking into this and many more.

How High Can A Hummingbird Fly?

So how do hummingbirds fly? The astonishing flight of these sweet hummers is like no other. They can fly forward, backward, sideways, as well as straightforward at very fast speed. They are also capable of hovering in one spot for a long period.

So how high do hummingbirds fly? The fact is these vigorous acrobatic birds are capable of flying as high as 500 feet above ground level. This is usually when they are in their migrating flight mode. These talented birds can fly 4,000 meters above sea level where there is little oxygen.

However, hummingbird normally prefers flying above the upper parts of most trees. This is mainly to shield them from predators.

Also, the male hummingbird tends to display some skillful displays such as somersaulting, swoop, speed dash, and so on. The male tends to pull off the most dazzling flying skill during courtship.

How High Do Hummingbirds Fly During Migration?

So, during migration, hummingbirds are capable of flying as high as 500 feet above the ground. They also favor flying high above trees so they can get some protection from predators.

How Fast Do Hummingbirds Fly?

These birds are simply fast flyers. Hummingbirds have the ability to fly as fast as 60 miles per hour especially during courtship displays as well as during migration. However, looking at their average flying speed, the value of the flying range is around 30 miles every hour.

How Far Do Hummingbird Fly?

Hummingbirds are known to fly fast and continuously without stopping for a long time during their migration. They can fly as far as 1,200 miles and approximately 18 to 22 hours without stopping.

This captivating flying ability makes them demand a high-energy diet such as sweet nectar. They will also charge up and feed more when their migration journey is close by.

How Fast Is Hummingbird’s Wing Beat?

The wing beat of hummingbirds is very fast and can vary depending on their size and species. Hummingbird can flap their tiny little wings up to 12 to 80 times per second while they are in their normal flight mode.

The Giant hummingbird for example can flap its wing from 10 to 15 times per second. The fastest known hummingbird species which is the Amethyst Wood-star hummingbird can beat its wing up to 80 times in just one second.

Hummingbird species from North America have an average beat of around 53 beats in one second.

We have established that hummingbirds can fly so high, even above sea levels where oxygen is usually scarce. But how exactly is this possible considering the fact that these high acrobatic flyers should need a good amount of oxygen for their vigorous activities? 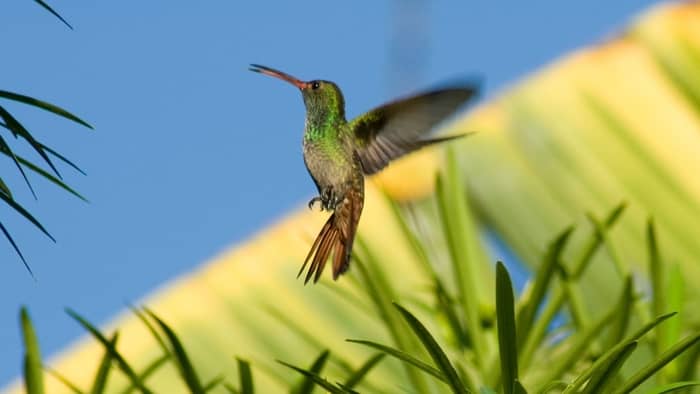 It’s only logical for these birds to need enough oxygen because of their fast activities. They tend to beat their wing so fast 60 to 80 beats per second. Even with these fast and high-energy demanding activities, hummingbirds are still capable of flying above the peak of mountains with very little oxygen. They are just that amazing.

Scientists have discovered these vigorous birds have some unique adaptations for them to be able to fly so fast and high with less oxygen.

Scientists discovered unique traits in two locations of the oxygen-carrying part of their red blood cells. So, these two special adaptation attributes give them the ability to assimilate oxygen with great efficiency at high altitudes.

When hummingbirds fly low, they as well have these adaptations found in the same location of their genome. They simply have this special ability to colonize new environments.

Various hummingbird species have the ability to adjust their hemoglobin capacity to bind oxygen in any area or altitudes they find themselves in.

Therefore, this tells us that hummingbirds are very adaptive creatures. So, there’s no worrying about the future of these sweet birds because of their flying or migrating circumstances. 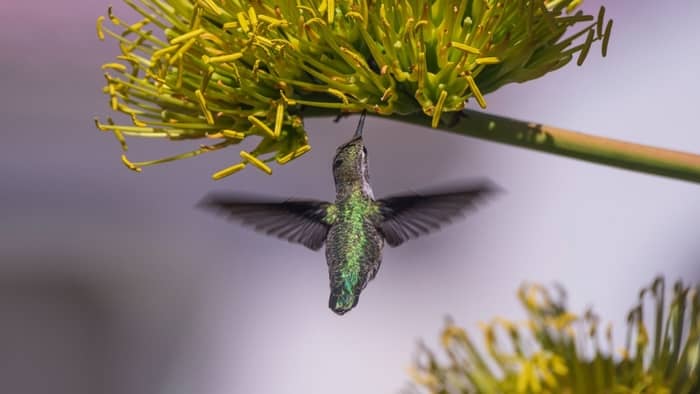 Researchers even made some findings and took blood samples in the Andes of high-flying hummingbirds. The genetic sequence behind the oxygen-carrying part of hummingbird’s red blood cells (hemoglobin) in different species was obtained.

The result showed that there has been a specific mutation in the high-flying hummingbirds that the hemoglobin tends to bind to oxygen more tightly. This is one reason their blood is more oxygen-saturated even when there is an insufficient or low oxygen supply as they fly very high.

This is the fascinating reason why some hummingbird species can survive as high as 4,000 meters.

Other animals on the other hand are less adaptive and may need more genetic reconstructing or changes to be equipped to future changes in the environments.

During the male flight display, they can fly at an incredible height of up to 150 feet. Then they will amazingly plummet straight down and then pull up right before impact. 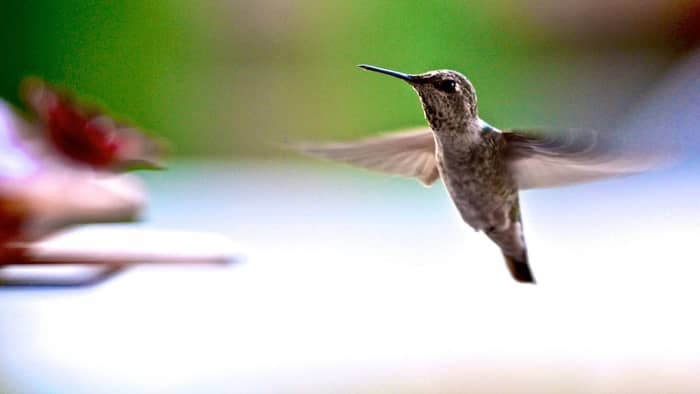 Conclusion How High Do Hummingbirds Fly

Hummingbirds can fly amazingly high as 500 feet above ground level. These birds are so talented and interesting to study as there are lots of things to love about them.

Read more about When To Stop Feeding Hummingbirds In Tennessee