Last Updated on January 17, 2022 by Guillermina

Did you know there are over 10 different hummingbird species in California, some visiting and others staying the winter? California is a haven for hummingbird enthusiasts and the home of the most vocal among hummingbirds. With some extra patience and time on your hands, you can spot gems like the albino Anna’s hummingbird!

Even if you’re just visiting, there are some public spots where you can enjoy hours of hummingbird watching. Read along to learn more about Califonia’s hummers.

What Is The Most Common Hummingbird In California

Anna’s hummingbird makes almost half of the hummingbird population in California. This is the most vocal, non-migratory bird that spends its days in flower-rich backyards. These hummingbirds lay eggs 2 to 3 times per season. The male bird has a magenta-colored neck with a green body, while the female has green, gray, and hints of yellow. Both are no more than 3.9 inches long and have a wingspan of 4.7 inches.

What’s unique about Anna’s hummingbirds is their process of mating. First, the male hummingbird will fly up to 130 feet high and dive back down, buzzing and making popping noises. Then he continues circling the female. After nesting, Anna’s hummingbirds might migrate to Southern California. 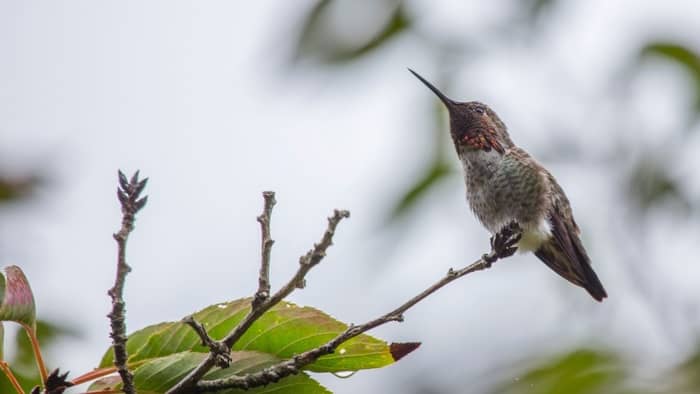 Even though the north is not as populated with hummingbirds as the east and south parts of California, some species are still worth mentioning. Despite Anna’s hummingbird, you can spot the Allen’s, Calliope, and Rufous hummingbirds.

Allen’s hummingbirds come to California from Central America. They prefer to stay along the coast, with very few inland visits. The male has a distinct orange neck, white chest, and green head wings. Females have darker orange wings and greenback.

Calliope is the tiniest among the hummingbird species in California, but it migrates all the way from Canada. They pass through the coastal region but usually settle up north. Males have a light brown body with darker wings and a fuchsia-colored neck. The female is brown with a soft orange chest and green speckles on her neck.

The Rufous hummingbird is highly energetic and hard to miss. The male has a vibrant orange color with a white spot on his chest. The female is green with deep orange spots on her neck. You can spot them year-round along the northern border.

Do Hummingbirds Overwinter In California

Most of the hummingbird species in California migrate by the end of summer. Like Anna’s hummingbird, some of them migrate in the same state, just down south. But many don’t hesitate to spend the winter in the same spot. Since the temperature is suitable, many species will stay if food is abundant. The blue-throated mountain gem is the one species that might overwinter in California if there’s a good food supply. 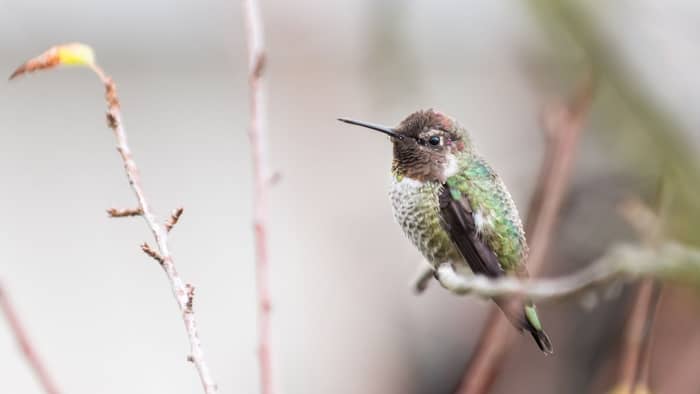 Types Of Hummingbirds In Southern California

The number of hummingbird species in California increases as we move south. Here you can spot Costa’s hummingbird, an amazingly colored bird. The males have a vibrant purple face with light green body and brown wings. The females are green with a white chest. Costa’s have a short tail and shorter wings.

The male broad-tailed hummingbirds have a deep red neck with green wings and a beige chest. The females have an iridescent green back with dark brown spots on their throat and head. They prevail in the east part of California, but you can still spot a small selection down south.

The blue-throated mountain gem and the broad-billed hummingbird are not frequent visitors, but they have been spotted in the Los Angeles area. They usually migrate through California and eventually stay to breed.

The violet-crowned hummingbird is among the rarest hummingbird species in California. This bird is native to Mexico, but it’s been spotted across the border a handful of times.

There have been a few reports about spotting a white-colored hummingbird in California. Some enthusiasts have managed to snag photos of the completely white birds feeding on their flowers and feeders. But these are not a special type.

They’re albino hummingbirds with pink eyes and pale beaks. Due to genetic mutation, they failed to develop pigment in their body and feathers.

Anna’s hummingbird is prevailing among the hummingbird species in California, so the albino birds are suspected to be part of this species. 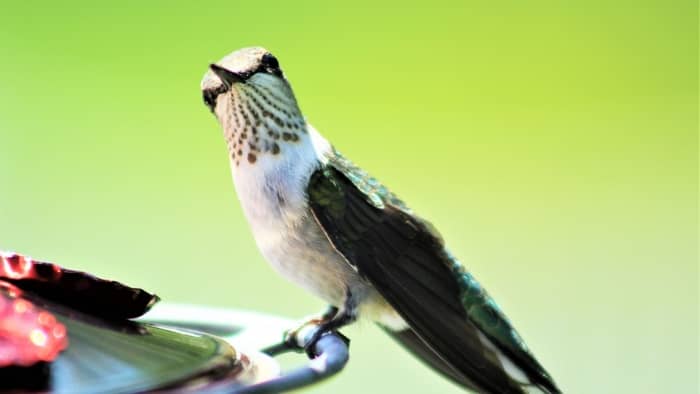 The blue-throated mountain gem reaches California in time for mating and breeding. Broad-tailed hummingbirds breed in forest areas. The females build their nests at 5-10,000 feet elevation.

Where To Spot Some Hummingbird Species In California

We’ve selected a few public spots where you can catch a glimpse of the hummingbird species in California. However, your chances depend on the season.

Stop at the Los Angeles County Arboretum and Botanic Garden if you’re around Los Angeles. Along the trails, you can spot Anna’s and Allen’s hummingbirds.

If you’re in for a hike, Tahoe National Forest and Yosemite also host a good number of hummingbirds. An early spring visit to Cabrillo National Monument is your greatest chance to spot Calliope’s hummingbirds.

Over 27 types of hummingbirds are found around the US, and at least 14 of them are spotted or residing in California. Some of the most common hummingbird species in California are Anna’s, Allen’s, and Calliope. Others are occasional or rare visitors. California residents have also spotted albino hummingbirds in the past.

If you want to attract hummingbirds to your California yard, make sure to hang feeders and plant a lot of nectar-rich flowers.