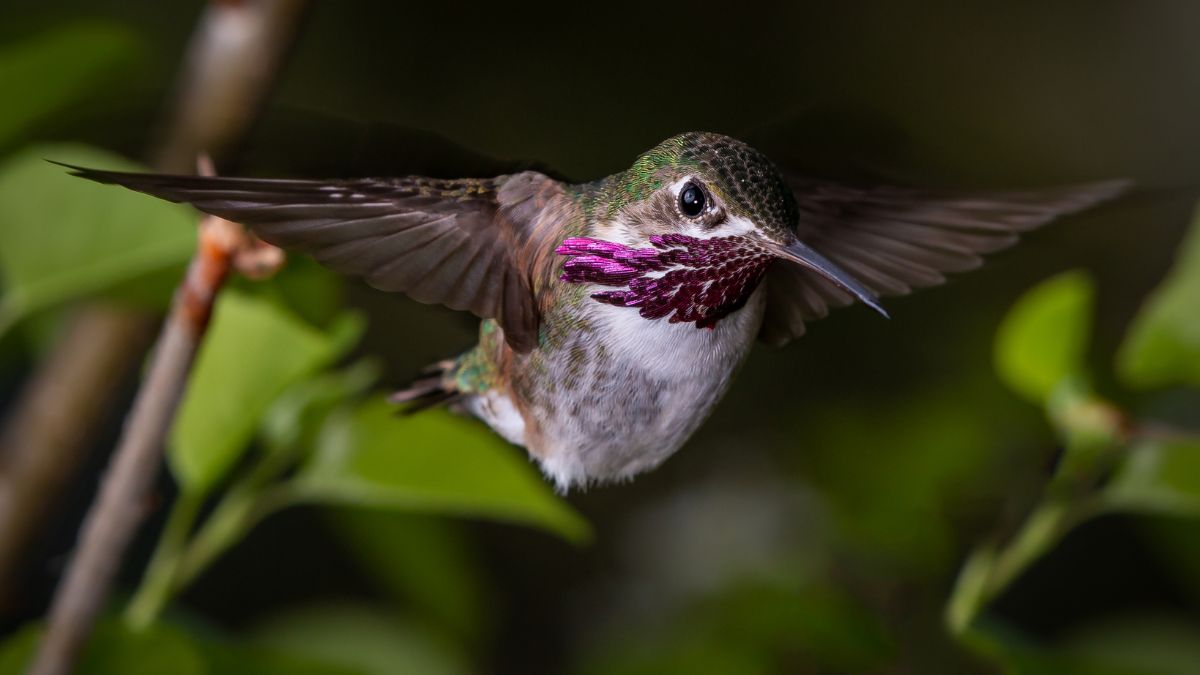 Last Updated on December 9, 2022 by Guillermina

When it comes to the Identification of Colorado Hummingbirds, there are a few things to keep in mind. To begin with, there are four commonly identified species of these birds that are frequently seen in this area of the US with an additional lot of unusual ones that have been observed. Colorado is a fantastic place to see a variety of these little creatures because you may have the opportunity to encounter different kinds of hummingbirds.

However, when identifying them, keep in mind that the males have more vivid colors than the females do. Colors associated with the male species include striking red, pink, purple, and several other hues. In contrast to male hummingbirds, the females’ feathers tend to be duller shades of dark green, brown, and sometimes white.

A list of hummingbird species found in Colorado has been compiled by us below. You can discover the name of the species, details regarding their appearance, and information about where and when you might be able to spot them. The four more prevalent kinds are likely to be seen often compared to the rarer ones. Use the guide below to learn how to identify them positively!

When To See Hummingbirds In Colorado

In Colorado, hummingbirds of four different species can be seen. However, when it comes to the identification of Colorado hummingbirds, it can be a tad bit confusing. The Broad-tailed Hummingbird is the most prevalent. Along with the Rufous Hummingbird, which may be seen in this area in July and August, there are also Calliope and Black-chinned varieties. 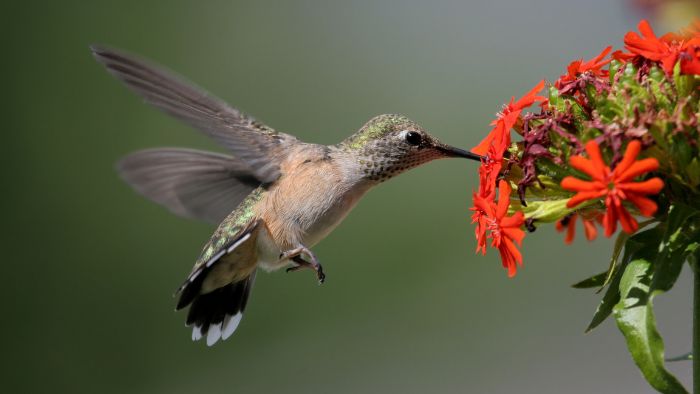 However, some of these species come to Colorado as early as March or the beginning of April, and they typically leave by November. You may also notice that throughout the summer and fall, there are more visitors present. While some only pass through, others will stay to breed and build nests in the state during this time. They frequently descend to valleys for food but typically nest at higher altitudes on mountains and foothills.

The ones that are attracted to Colorado’s landscape can be considered rocky mountain hummingbirds due to their abundance and love of the hills. The greatest nectar is typically produced by tubular, brightly colored flowers because they are particularly alluring to these birds. These include several annuals, such as cleome, impatiens, and petunias, as well as perennials that include bee balms, columbines, daylilies, and lupines.

Biennials like foxgloves and hollyhocks also draw them in. You would be glad to know that the early parts of the morning and just before sunset, are typically when hummingbirds visit feeders in search of nectar. But despite the fact that those two periods appear to be their preferred eating times, they can be seen eating throughout the day.

Types of Hummingbirds in Colorado 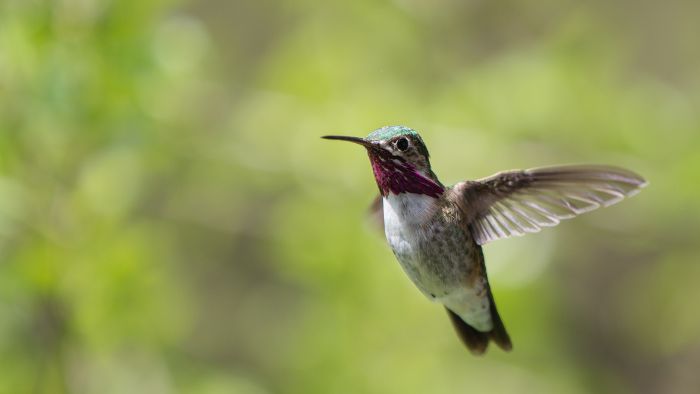 Colorado is renowned for its magnificent scenery, diverse animals, and enjoyable outdoor activities. One of the most attractive things about this area is that they have more than 500 bird species to keep an eye out for. These include around 10 stunning hummingbirds that add to the state’s allure.

Hummingbirds are small, colorful creatures with striking personalities that can hover even while eating. They are also amongst the only species that can fly backward.

Here Is A List To Help You In The Identification Of Colorado Hummingbirds:

The Pacific Northwest and portions of western Canada are where the calliope hummingbird spends the majority of its breeding season. Early in the spring, after spending the winter in Central America, they migrate up the Pacific coast. Given that the calliope is the smallest bird in the United States, this journey is astonishingly vast.

The males have a distinctive neck pattern with side-forking magenta stripes. The underparts and some of the throat are speckled with green on the plain-looking females. Calliope hummingbirds migrate through Colorado, mostly on their way back south in July and August to benefit from the late-summer wildflowers in hilly meadows. 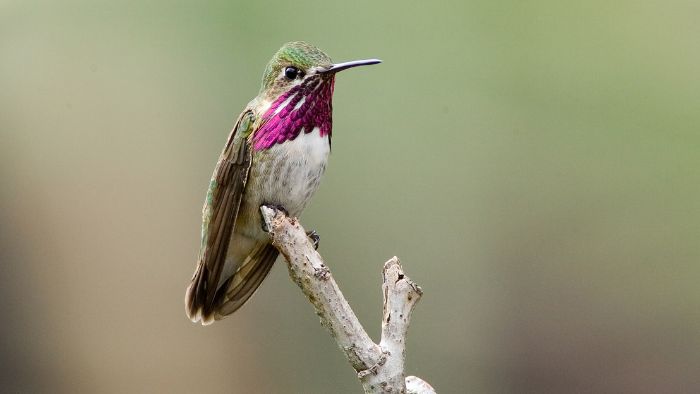 Broad-tailed hummingbirds are mountain lovers and can reproduce up to 10,500 feet above sea level. Due to their adaptability to alpine life, they are perhaps one of the most widespread bird species in Colorado. The throat of the male is a rosy-magenta color while the females have buff-colored flanks and some green markings on their cheeks and throat.

Look for broad-tailed hummingbirds between May and August as they are transient visitors during this time. In the central and western regions of the state, they migrate to Colorado for the summer breeding season.

Every year, black-chinned hummingbirds from Mexico and Central America fly north to reproduce in the western US. In typical lighting conditions, a male’s throat seems to be plain black, but there is occasionally a little strip of purple feathers visible along the bottom.

Females have a plain throat and a green upper body with a pale underside, similar to others in this species. From spring to fall, keep an eye out for black-chinned hummingbirds in Colorado. 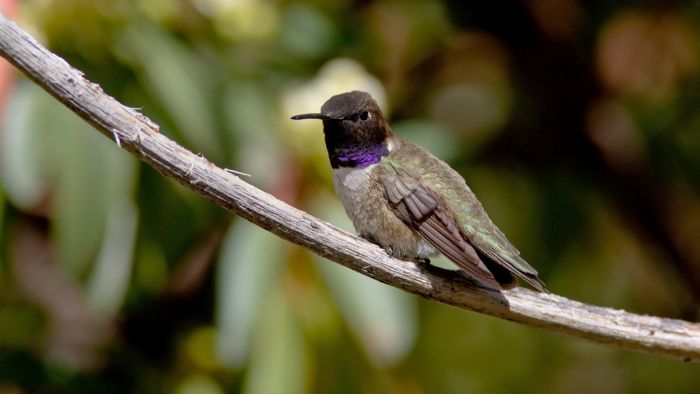 Rufous hummingbirds are renowned for being feisty little buggers. This is because they are territorial and don’t want other hummingbirds near their feeders. Males have orange-red throats and a white patch on their upper breasts. The female species are also quite noticeable with their eye-catching speckled throats, rust spots, and green-colored bodies. These birds migrate through Colorado in the summer and fall.

Male Costas are distinguished by their intensely purple faces. Their throats and foreheads both have purple splotches and feathers that flare out. Females have a white underside and a green top. Costa’s are little and have slightly shorter wings and tails than other hummingbirds. Keep in mind that although they are uncommon in the Colorado area, they may be spotted there from time to time.

In the majority of their range, Anna’s spend the entire year in the United States, but you’ll only find them in a few western states including California, Oregon, and Arizona. Their chest and belly are covered in emerald feathers which have a tendency to be a little bit brighter and more iridescent than most others. The multicolored feathers on the males’ heads reach up onto their foreheads, and they also have rosy-pink necks. Despite being uncommon for Colorado, Anna’s are occasionally seen there. 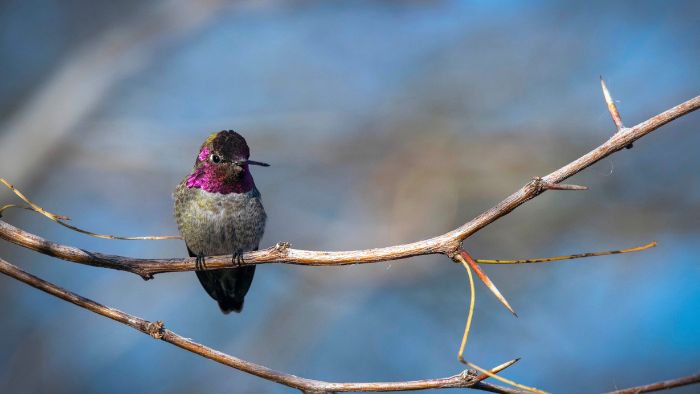 The Rivoli’s hummingbird is known for its magnificence as it was previously named. Males have a neck that is a turquoise color with a purple head. They also have green and brown bodies. Keep in mind that they can appear darker in some lighting.

Females lack similar coloring and are instead green on top and white below. With a longer bill, they are slightly larger than the majority of hummingbirds observed in the United States. Although they’re uncommon, Colorado occasionally sees a few Rivoli’s

Although they are uncommon in Colorado, Ruby-throated Hummingbirds have been sighted throughout the summer near Denver and Colorado Springs. Fall migration typically lasts from September until mid-October, but some of them are now staying put all winter thanks to hummingbird feeders. 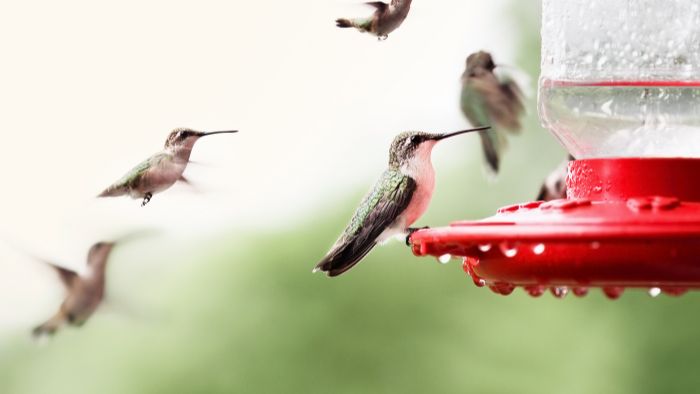 Hummingbirds are among the most fascinating birds in the world, and Colorado is home to a number of different varieties. They are not only eye-catching, but they also play a crucial role in pollination, which benefits the local ecosystem.

There are various ways to draw them to your yard, including installing feeders and cultivating native plants. This will also make the identification of Colorado hummingbirds much simpler.

Here are some suggestions to help you get more hummingbirds in your yard:

Here’s a video with some great tips about hummingbird feeders.

When it comes to the identification of Colorado hummingbirds, you would do yourself a huge favor by creating a habitat in your yard that will keep them happy. This little gesture will also help you positively identify each species by its color and other distinctive features.

According to Colorado State University Extension, placement in the garden is vitally crucial for supplying an attractive habitat. Large spaces are preferable to tiny patchy ones for pollinators because they prefer sunny locations. The landscape should be planted with a range of flowering species in groups or sweeps rather than as individual plants.

This alone will enhance the number of hummingbirds that visit your yard. The reason is that instead of needing to travel far to find plants of the same species, it enables them to pollinate each region effectively. Find out how to create a hummingbird garden here.