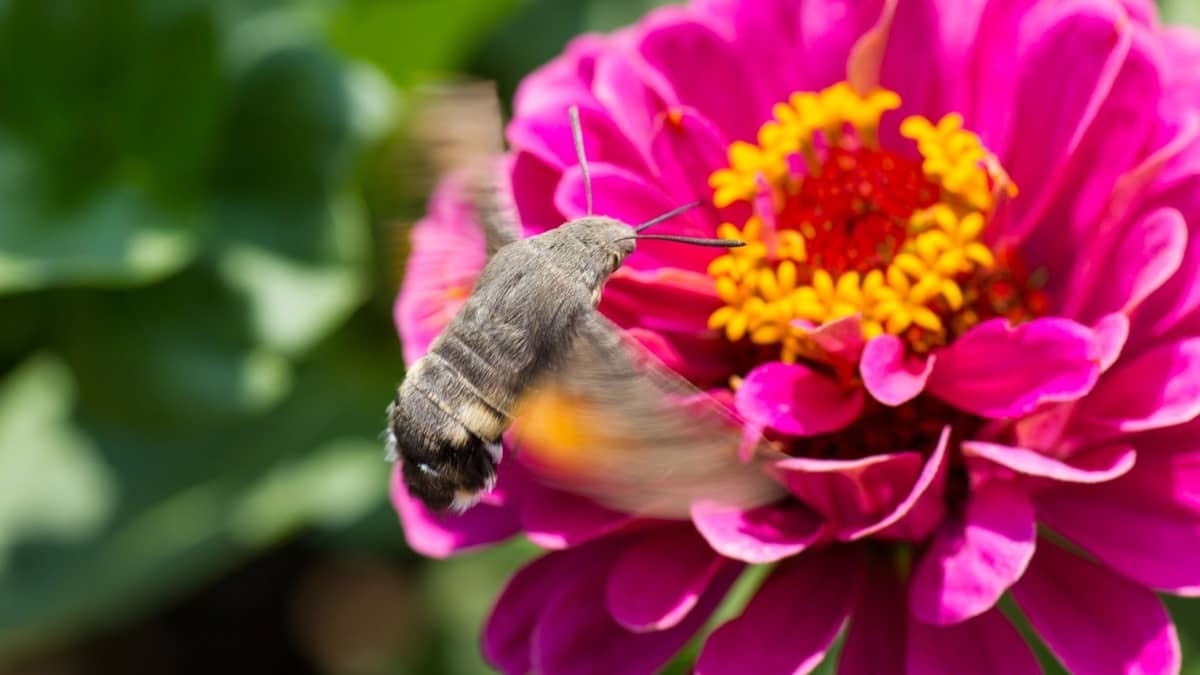 Last Updated on February 13, 2022 by Guillermina

Although a rare view, these moths can easily trick you into thinking you’ve spotted baby hummingbirds. There are over 100 moth kinds, and most of them forage your garden at night. So it’s hard to assume you’ll spot one in broad daylight!

North America is home to 4 kinds of hummingbird moths, but 2 of them are dominant; the Snowberry Clearwing and the Hummingbird Clearwing. They start flying in spring and are most active during the summer months – exactly like hummingbirds!

Read on to find out how and where you can spot the moths that look like hummingbirds.

How To Tell Apart Moths From Hummingbirds

The moths that look like hummingbirds are 1 to 2.5 inches long with a plumper body than a hummingbird. Their wingspan ranges from 1.6 to 2.15 inches, depending on the kind. Like regular moths, their wings are covered in scales, but most of them fall off due to the motion, so the moths got the ‘clearwing’ title. Hummingbird moths have antennae and 4 legs.

Unlike the hummingbird, the hummingbird moths have small tails that open up like fans and fuzzy bodies. They’re white, yellow, or rusty red. Moths don’t have a beak; instead, they have a long tongue that unrolls to gather nectar. The tongue is almost twice as long as their body! 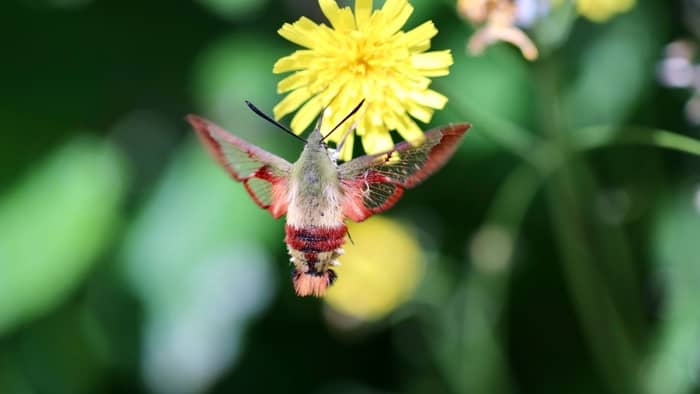 Both the Snowberry and the Hummingbird Clearwing feed off of nectar. Their plants of preference are some of the hummingbird’s favorite: honeysuckle, bee balm, and verbena.

The 2 common hummingbird moths are part of the genus Hemaris and are typical moths. What do hummingbird moths turn into? They start as eggs, progress to larvae, then chrysalis, and finally morph into moths. Female moths lay eggs on some of their favorite plants, like the bee balm. As the young moths grow, they feed off the host plant.

The 2 less common moths that look like hummingbirds are part of the Sphingidae family. They’re the White-lined Sphinx and the Tobacco hornworm.

The Snowberry Clearwing populates the western US, while the Hummingbird Clearwing habituates in the eastern parts. These moths that look like hummingbirds behave just like the birds when feeding. They hover around the flowers in mid-air and enroll their proboscis to suckle nectar.

Hummingbird moths can fly up to 12mph, which is much slower than the hummingbird’s 30 to 60mph. They can move their wing up to 70 times a second, very close to the 80 counts of hummingbirds. The rapid wing movement emits a similar humming sound.

The moths that look like hummingbirds emerge from their chrysalis in spring. This timeline matches the hummingbird migration. The moths are most active in summer, even during the hottest days and rain. They can reside anywhere from forest edges to meadows and city gardens. They’re driven to the food source.

The easiest way to attract hummingbird moths is by planting some of their favorite food. They will lay their eggs on specific plant leaves like cherries, plums, honeysuckle, snowberry, viburnums, and hawthorns.

Is The Hummingbird Moth Hawaii Resident 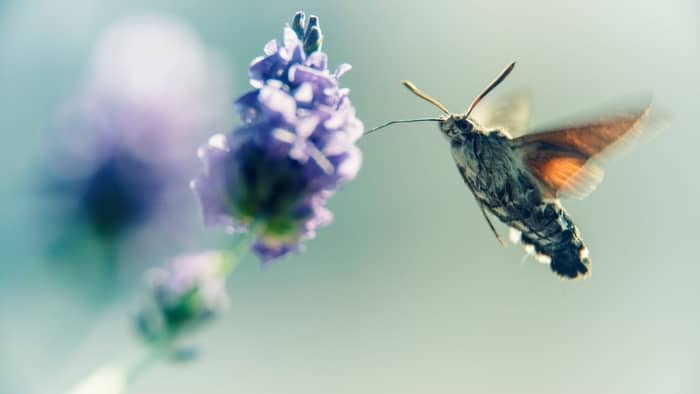 Did you know that hummingbirds are banned in Hawaii? This is because Hawaii doesn’t have any native hummingbirds. Humans introduced them years ago since the archipelago is very far from the mainland for the hummingbirds to reach it independently.

However, this caused unexpected problems. Hummingbirds are might pollinators, so they pollinated the local pineapples. This led to the fruit forming seeds. Seeds make the consumption of pineapple harder for people, affecting the pineapple export industry, so they banned the birds.

Hummingbird feeders are also banned. The only thing sucking the nectar of the flowers in Hawaii are moths that look like hummingbirds.

Hummingbird Moths Are Not Common

So is it rare to see a hummingbird moth? The western US has higher chances of spotting these moths than the rest of the country. You’ve might already spot some, but you can easily confuse them with bumblebees. 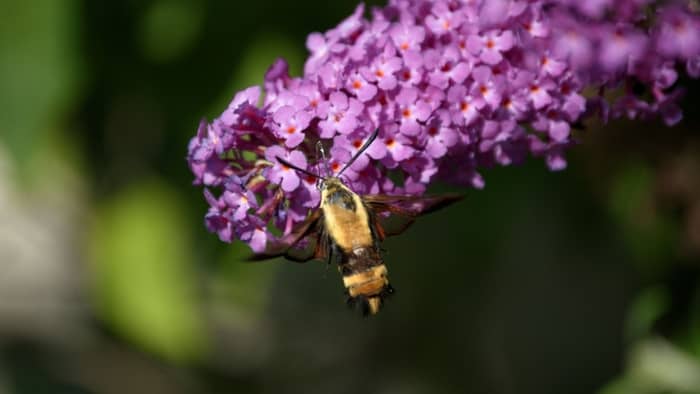 Bottom Line: There Are Moths That Look Like Hummingbirds

Moths are nocturnal insects that feed off natural fibers, so you would never suspect to see moths that look like hummingbirds. These special species feed off nectar and sound just like the hummers. The most common kinds in the US are Hummingbird Clearwing and the Snowberry Clearwing.

You can find them in meadows, clearings, and forest edges but also thrive in gardens with aromatic, nectar-rich flowers. The main difference is their 4 legs, the transparent wings, and the lack of feathers and beaks. To attract them plant beebalm, honeysuckle, and cherries.

Is it rare to see a hummingbird moth?

Depending on where you live, it might be hard to spot moths that look like hummingbirds. They're more dominant in the western parts than the east. Make sure to plant their favorite food sources and plants where they can lay eggs.

What do hummingbird moths turn into?

The hummingbird moth lays eggs after mating that turn into larvae. The larvae feed on the host plant until it grows into pupa or chrysalis. The fully grown moth then emerges from the pupa and flys to forage the nearby flowers.