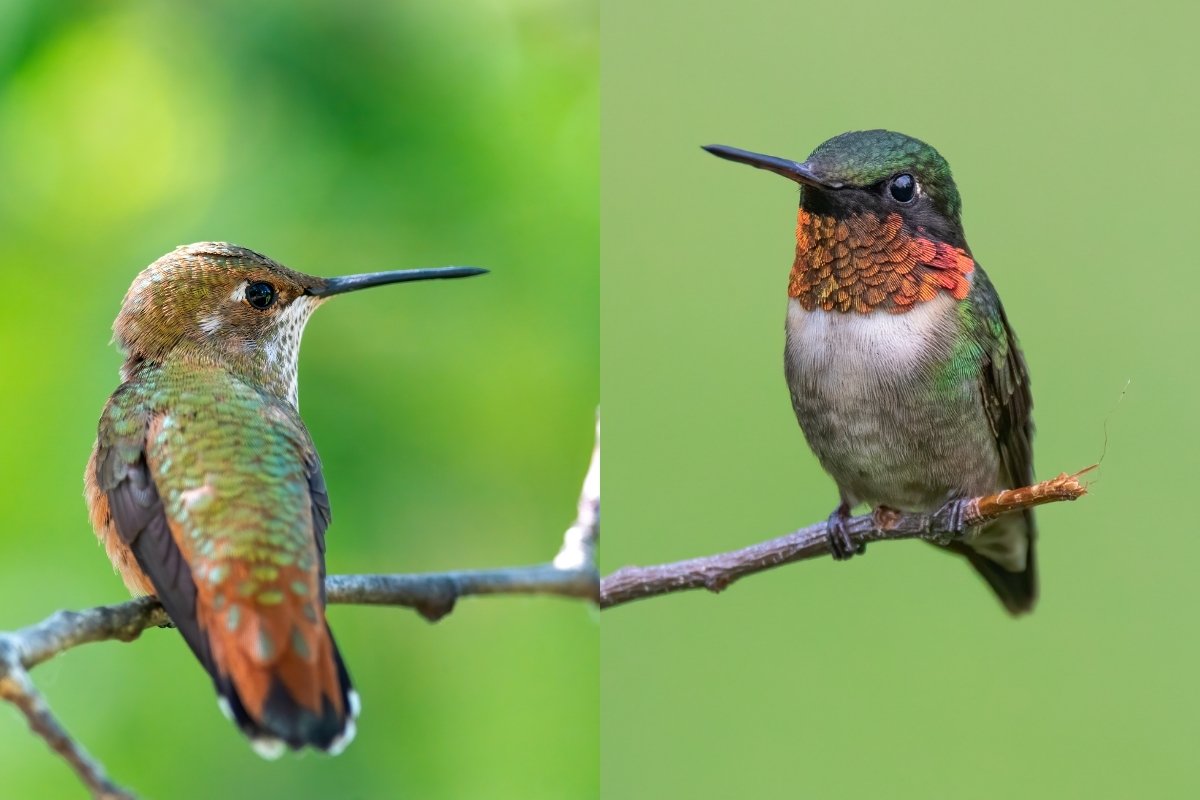 The two most common hummingbirds in the US overlap in locations, so sometimes it’s hard to distinguish the Rufous vs Ruby Throated hummingbird. The male hummingbirds from both species have a more colorful plumage, but under different lights, they look alike. They’re similar in size, so it’s even harder to tell them apart.

If you’re an avid birdwatcher, we’re here to help; below, you’ll find 6 ways to recognize the Rufous vs Ruby Throated hummingbird.

The Rufous hummingbird got its name after the marvelous color of its feathers. While most hummingbirds have vivid iridescent colors, the rufous hummingbird has rust-colored feathers that help it blend in with the surrounding.

The females begin building their nest less than a week after arriving in the chosen territory. They often choose oak, pine, and rarely ferns for their nest 30 feet above the ground.

Where Can You Spot The Rufous Hummingbird

So where are Rufous Hummingbirds found? Rufous hummingbirds spend spring, summer, and fall in the US. In springtime, you can find the largest number of them in the California region. Summer is reserved for the Pacific Northwest, and in the fall, they move to the Rocky Mountains. From here, they start their journey to Central America, often spending the winter in Mexico.

How To Identify A Rufous Hummingbird

How can you tell if a hummingbird is a Rufous? Rufous hummingbirds are 2.8 to 3.5 inches long and have a wingspan of 4.3 inches. They’re also commonly confused with Allen’s hummingbird due to the size and color.

The small size doesn’t stop this bird from being feisty. Rufous hummingbirds can chase away all other hummingbird species from their territory!

The Mating Ritual Of Rufous Hummingbirds

The mating ritual of Rufous vs Ruby Throated hummingbird is very different. The male Rufous hummingbird flys in oval shapes as soon as a female approaches his territory. He’ll start flying in figure-eight or J shapes to fascinate her even further when she comes closer.

The female lays her eggs for up to 19 days and usually has one brood per season. Are Rufous Hummingbirds rare because of this reason? No, the Rufous hummingbirds are common but are under threat due to the massive destruction of their natural habitat.

National Geographic Backyard Guide to the Birds of North America

The ruby-throated hummingbird is the first most common hummingbird in the US and one of the few that overwinter here. They dominate a significant territory of eastern North America and nest in open woodlands. The male has a vividly colored gorget while the female is duller to disguise itself better.

Gorget or throat feathers are another clue to look for when telling apart Rufous vs Ruby Throated hummingbird. While both species have brightly colored gorgets, the one on the ruby-throated hummingbird pops up more. This is due to the remaining plumage being paler.

Get to Know about Hummingbird Egg Incubation Period: 3 Thing You Need To Know

Where To Find Ruby-Throated Hummingbirds

You can find Ruby-throated hummingbirds in woodland edges and gardens. They’re plentiful in urban areas and always on the hunt for flower nectar. They mate from May to July and often have more than one brood per season.

Although these species rarely overlap, they might stay in the same area during their migration. If you’re confused about what kind of visitors you’re getting on your feeders, here’s the list of Rufous vs Ruby Throated hummingbird differences.

The Rufous hummingbird has a specific brown and orange, a rust-like color that no other hummingbird has. The male has white chest feathers under the orange and green gorget. The female also has some orange hues, but her throat is speckled with green dots.

Ruby-throated hummingbirds are not as specific; they’re green and grey with fuchsia-colored gorget in the males.

There’s not a significant difference between rufous vs ruby throated hummingbird when it comes to size. Both birds average around 3 inches in length and 4 inches in wingspan. The males in both species are smaller than the females.

Location is the key clue – the breeding territories of these species do not overlap. The Rufous nests from Oregon and up north, while the Ruby-throated hummingbird stays in the east part of North America.

They might overlap on one occasion during their migration to Central America.

Rufous hummingbirds release loud noises only when they’re threatened or want to chase away another bird.

Telling apart Rufous vs Ruby Throated hummingbird is much harder for beginners due to the similar size of both birds. While the females of these kinds are much alike, the males have distinct yet vivid colors that make them easier to distinguish.

They prefer to spend the season in different parts of North America, so it’s harder to spot them side by side. On a rare occasion, during the fall migration, these hummingbirds can be spotted together. However, the Rufous is much more aggressive and will chase off other hummingbirds.

How can you tell if a hummingbird is a Rufous?

The Rufous has a unique orange and brown color, unlike any other hummingbird. The easiest way to identify it is by color and territory. They nest in the northern parts of North America up to Alaska.

Rufous hummingbirds are not rare or endangered. This is a common confusion since most of its natural habitat gets destroyed and they avoid migrating near urban areas.

Where are Rufous Hummingbirds found?

Rufous hummingbirds migrate up north, settling in the Pacific Northwest. They can be commonly seen in Oregon and the surrounding area.

What is the average lifespan of a Rufous Hummingbird?

Rufous hummingbirds can live up to 9 years, if they manage to survive the first year. The average lifespan, however, is 5 years.