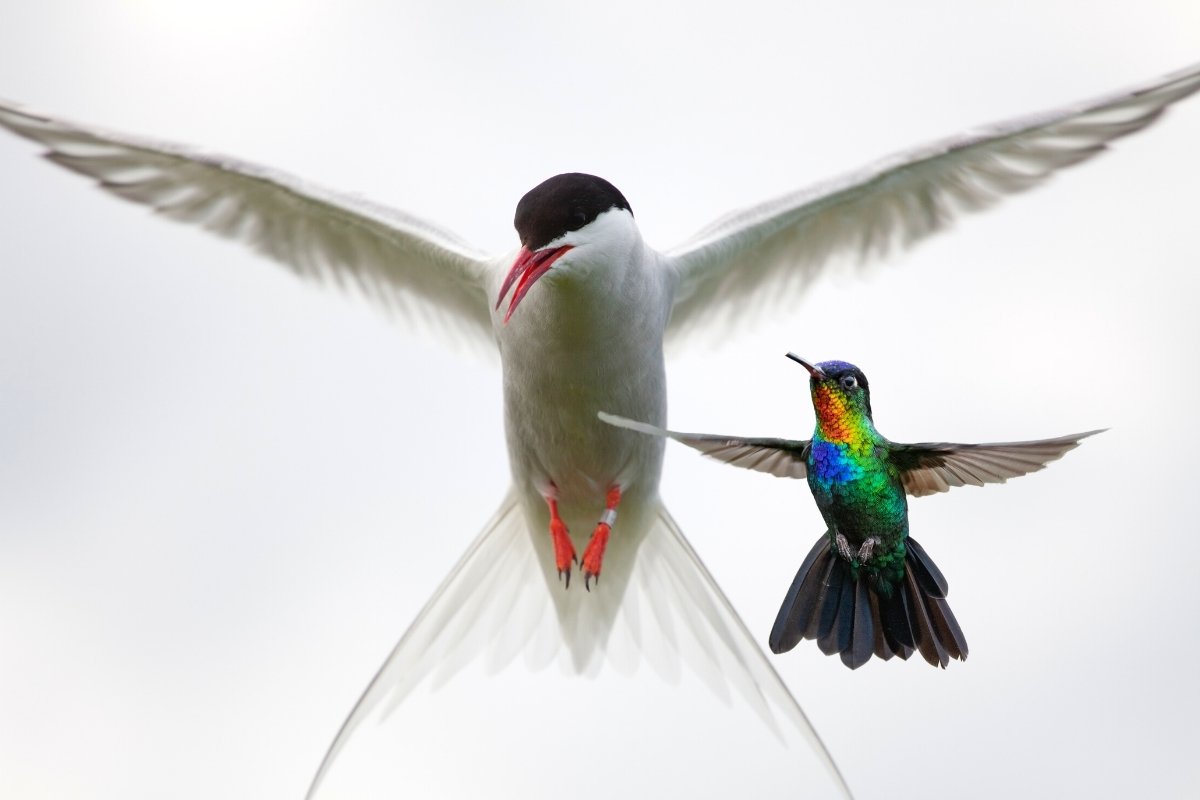 Except for 8 species, most birds can fly straight, but what bird flies backwards? Some birds might look like they’re flying backwards in the middle of a fight. But this is just them backing off as a defense mechanism.

The impossible way of flying is obtainable only to hummingbirds. Due to their unique wing flapping, flying backward is not only possible but also easy!

Read on to learn what bird flies backwards and how this is anatomically possible.

How Is Flying Backwards Possible

We know what bird flies backwards, but how is this possible? Hummingbirds are the only birds in the world able to fly backward. This is due to their ability to move the wing muscles in a figure-eight motion.

But how many species of birds can fly backwards? Birds use their chest and wing muscles to fly forwards. However, most birds can only move their wings up and down, forming a flap that pushes them forward. Hummingbirds have particular wing muscles that can move in a circular motion, enabling backward flying.

You’re not the only one wondering what bird flies backwards. In 2012, a few scientists, fascinated by how hummingbirds can move backward, decided to check how much energy the bird uses to perform this action.

Using a wind tunnel and a syringe with nectar, they examined the bird’s body posture, wing motion, and oxygen intake when moving backward. Surprisingly, flying backward was just as energy-consuming as flying forward. Moreover, both forms of flying were less energy-consuming than hovering in place.

Read more about 10 Birds That Drink Nectar Besides Hummingbirds

The question isn’t what bird flies backwards, but what else it does? The unique side of the hummingbird’s flight goes beyond the backward motion. They’re also among the rare birds that can hover. This movement is also due to their versatile and flexible flying muscles!

Wondering what birds can hover and fly backwards? Terns are seabirds that hover above waterbodies looking for food. Hawks hover before attacking their prey as well as eagles. These birds have excellent acceleration enabling them to fly away fast once they have secured the target. Vultures, kestrels, and rough-legged buzzards can also hover.

Most birds with hovering abilities are sizable birds of prey. The hummingbird, however, doesn’t fall in this category. So why did evolution enable this bird to hover?

Hummingbirds can’t hop or walk, and they feed on flower nectar. While picking up worms and insects takes a millisecond and can be done without stopping, slurping the nectar takes a while. If they can’t hover, the hummingbirds will stop to feed and drop.

When Do Hummingbirds Flying Backwards

What birds can hover and fly backwards, if not the one feeding on tubular flowers? Hummingbirds have long beaks that hide a long, fuzzy tongue. When they approach the flower, they have to sneak their beak inside to access the nectar.

Once there’s no more nectar in that flower, they switch to another one. But to get the beak out, hummingbirds have to move backward. Reversing is possible due to the rotator cuff and powerful chest muscles, which make up nearly 30% of their body weight.

What bird flies backwards when feeding besides hummingbirds? There’s no proof of other birds, but bees also fly backwards. They have a unique muscle called the asynchronous flight muscle, which helps them hover and fly backward when feeding.
The bee’s and hummingbird’s flying patterns have evolved primarily due to their diets.

How Hummingbirds Fly When Fighting

Do you know what bird flies backwards when defending its territory? Hummingbirds are territorial, especially when matting. They go above and beyond to fascinate their mate. Having a competitor entering their territory during this period means trouble.

The original resident uses the beak to attack the intruder. They use the beak like a sword, so in order to poke and retrieve, they need to fly backward. The same applies to their competition; he has to back up to avoid being poked.

Hummers like to be lonely, so having many flying and surviving skills sure helps.

Are Hummingbirds the Only Birds That Can Fly Backwards

The small but mighty hummers hold the prestigious skill of being able to fly backward for more than a few seconds. So what bird flies backwards beside the hummingbirds? Flycatchers, egrets, and herons can fly backward occasionally when faced with a predator or another danger. However, they can only fly back for a few seconds.

Most birds have strong chest muscles, so pushing the wings upwards is forced, while the downwards flap comes naturally. They don’t have a rotator cuff, limiting the wing movement to upward and downward strokes.

We learned what bird flies backwards, but what about insects? Besides the bees, there’s one larger insect capable of flying in more than one direction. Dragonflies have much in common with hummingbirds, including their flying patterns. It doesn’t come as a surprise since dragonflies are known as acrobats.

The hummingbird’s ability to fly in more directions has inspired engineers at AeroVironment to create a new aircraft more than 10 years ago. The Nano Hummingbird looks like the real bird, has an integrated camera, can hover and fly in different directions. This is a remote-controlled aircraft funded by the Defense Advanced Research Projects Agency.

The question of which bird moves backwards might seem strange to those new to the bird world. But hummingbird fans are well aware of the bird’s feeding pattern, which requires some reversing. Since they move with an immense speed, it’s hard to notice the figure-eight movement they make to move backward.

But there are more species in the animal kingdom that can fly backward. Bees, dragonflies, and some birds can maneuver flying backward for a brief moment.

Hummingbirds can't walk but can fly backward. Some birds and insects, like bees and dragonflies, can also perform a backward motion for a few seconds.

How many species of birds can fly backwards?

Hummingbirds, flycatchers, egrets, and herons can fly backward. However, only the hummingbird can do it for longer than a few seconds due to the strong chest muscles and rotator cuff.

What birds can hover and fly backwards?

Hummingbirds have the ability to move their wings in all four directions and therefore fly backward and hover.