Last Updated on September 27, 2021 by Guillermina

When do hummingbirds arrive in Virginia is the question we will be answering today. Hummingbird’s arrival and departure vary for different regions. So we will be looking at their migration period for the state of Virginia.

Hummingbird lovers always love to plan ahead for these lustrous birds’ arrival so they can experience more visits to their garden. One good step to planning right is to have an idea of when these remarkable birds will be arriving in your region.

So, if you reside in Virginia and you’re wondering when hummingbirds arrive in Virginia, we will be discussing this and more in this post. So let’s begin.

When Do hummingbirds Come To Virginia?

Generally, hummingbirds arrive in Virginia around spring.  These winged lovely creatures will arrive specifically from mid-April. The male hummers are the first to arrive around mid-April in Virginia. Then a week or two weeks later, the female hummers and juvenile hummers follow usually around May.

When Do Hummingbirds Leave Virginia?

Hummingbirds in Virginia will migrate or leave around fall. Starting from September, most of these hummers would have left and others will leave around October.

The migrating males are mostly the first to depart followed by the females and juvenile hummers.

However, the Calliope hummingbirds and Rufous hummingbirds may be seen once in a while passing through Virginia during fall or winter. The rest are also rare or accidental visitors.

The Ruby-throated hummingbird species are seasonal in Virginia. Sighted in Virginia mostly during summer. But they will begin to arrive little by little during spring usually around mid-April to May.

Their departure is usually around September or October. However, some Ruby-throated hummers have been seen lingering for a bit longer. Sighted through winter in Virginia.

The male Ruby-throated hummingbirds are known for their aggressive and territorial behavior when it comes to flowers and feeders. Once they are done mating, these male hummers don’t stay for long. They depart early usually by early August.

The female Ruby-throated hummingbirds usually set up their nest on thin branches. They make their nest out of thistle or dandelion and are held down together with spider stalk. 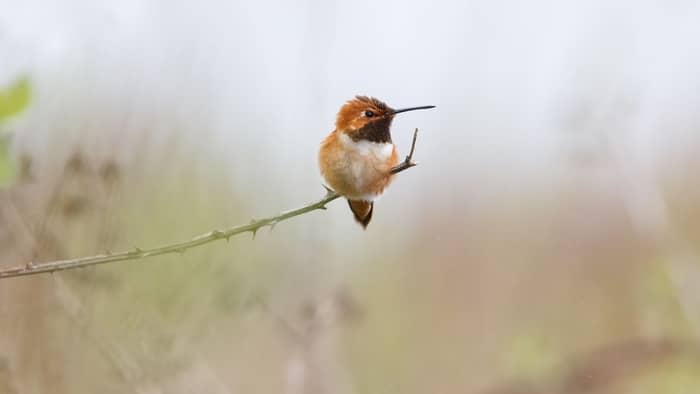 The Rufous hummingbird is classified under seasonal species that do visit the state of Virginia. This species may not be as common as the Ruby-throated is in Virginia, but a few of them are always spotted. You can mostly find them around towns such as Norfolk, Richmond, Lynchburg, and Charlottesville.

The Rufous species are known to be one of the farthest migrating birds and they can travel up to 4,000 miles. Their breeding ground is around Northwest Alaska. They will also winter in Mexico and the Gulf Coast for winter. Rufous hummingbirds will feed on nectar and insects such as flies, gnats, and midges.

Their nesting ground is preferably high up in trees. They make use of soft plant down and spider webs to hold it together.

Rufous hummingbirds are also aggressive. They can chase away other hummingbirds that are even bigger than their size.

The Black-chinned are known to be a rare or accidental species of hummingbird in Virginia. Sighted for just a couple of times in the last 10 years.

Once they are done breeding, they usually move to higher mountain areas that have lots of flowers before they migrate to western Mexico to winter.

They feed on nectar, small insects, and spiders. Their tongue is capable of licking 13 to 17 times per second while feeding on nectar solution. Their nest is usually made of plant down and spider silk to hold it together. 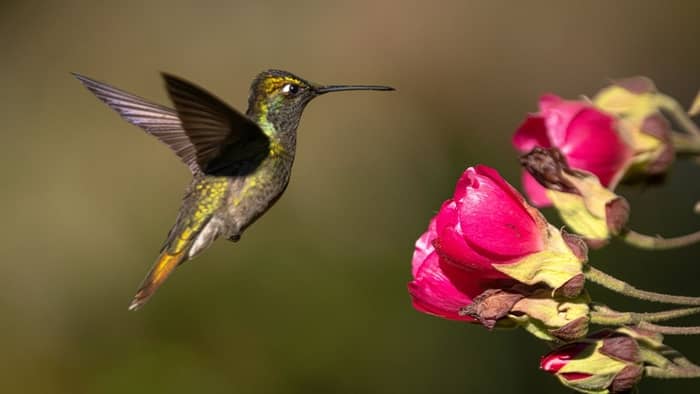 Rivoli’s hummingbirds are rare or accidental species to Virginia and they are very rarely sighted. They are bigger hummers possessing striking or noticeable color compared to other hummingbirds.

Rivoli’s hummers are resident to Mexico and Central America. However, a few of these hummingbird species do migrate or wander north into southern Arizona and New Mexico. They also prefer to build their nest high up.

Calliope species are also accidental or rare hummingbirds to Virginia. Sighted just a couple of times in Charlottesville and Nokesville in the last 10 years.

Known as one of the smallest birds in the United States. However, they are capable of flying for over 5,000 miles every year. They can fly all the way up to Mexico and as far as Canada and back.

Their migration during spring is mostly to the Rocky Mountains along the Pacific Coast and to their breeding locations in Colorado, California, and up to northwestern states. They love to nest on evergreen trees. They may even reuse their nest or build on top of an old nest.

Anna’s hummingbirds are tiny birds and they are accidental or rare species to Virginia. Seen only a couple of times during winter.

They prefer to nest high in trees around 6 to 20 feet. 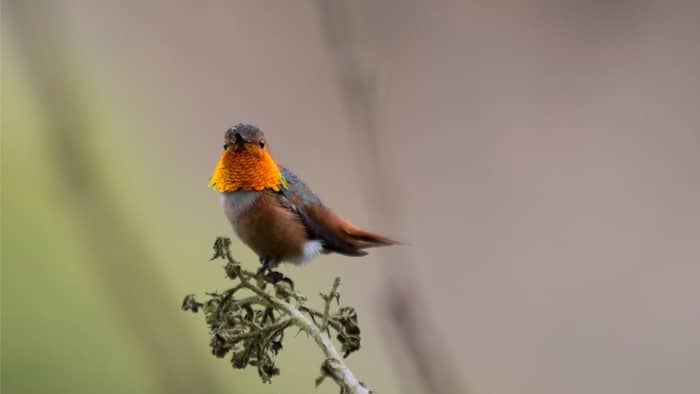 Their nest location is at no fixed height and the nest sites are usually located near streams with shades.

When Do Hummingbirds Arrive In Virginia: Conclusion

When hummingbirds do arrive in Virginia is generally around spring starting from mid-April or May. Then most of them will depart or migrate starting from September and others in October.