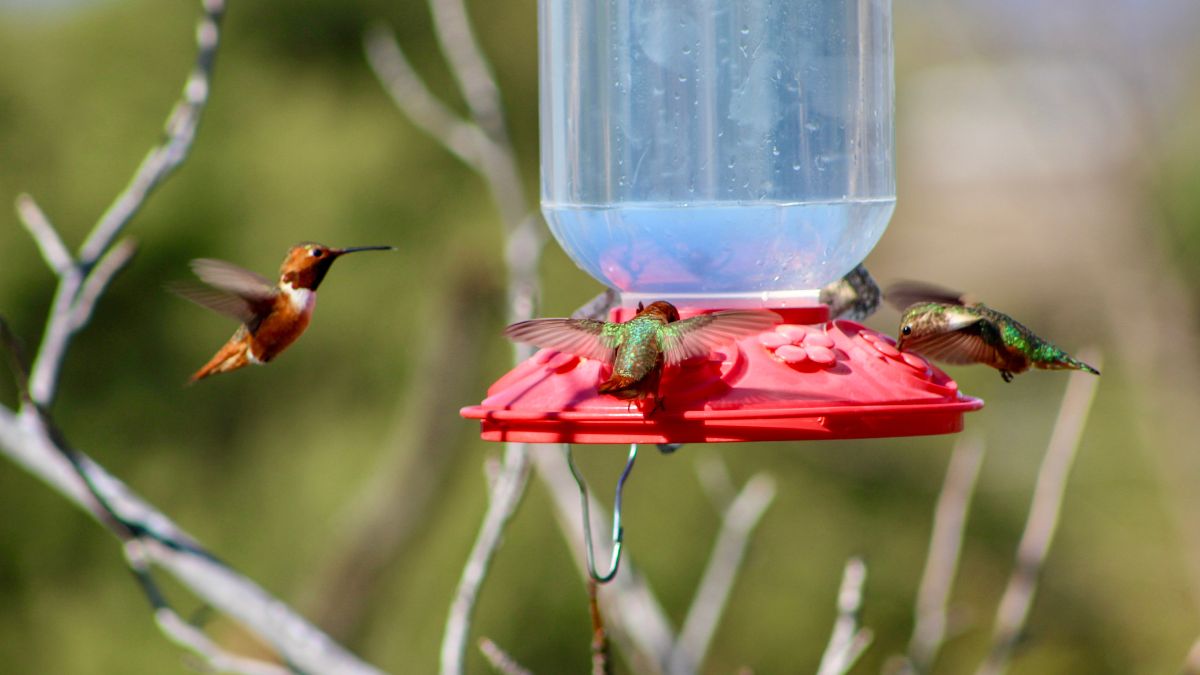 Are Hummingbirds Territorial Over Feeders? Well, you may have witnessed them chasing or fighting each other when they are around your backyard feeder which is quite common behavior. A hummingbird’s aerial dance as it sips sweet nectar from blossoms is a sight to behold.

You may anticipate that a species as delicate and fond of sweetness would rank among the calmest. In truth, things can become a little stressful whenever there are two or more of them in the same vicinity. Relentless in their urge to defend their territories, these feisty birds zip about, battling in midair or chasing each other with chattering calls.

Typically, you may see just one male hummingbird at a feeder. The reason for this is that the male species has the habit of claiming their territory. If you’re an avid bird watcher or have hummingbird feeders in your yard, then I am sure you have witnessed their aggressive performances as they are known to put on a show. Find out more about these feathered creatures and their behaviors in the article below.

Why Do Hummingbirds Fight Over The Feeder?

When it comes to Hummingbirds fighting over feeder, the male species are very protective of their territories and their food sources. It makes sense given that flowers, which are their main supply of nectar, are only available for a short while during the blooming season. Therefore, they compete for feeders in order to preserve the delicious nectar which is a crucial food supply. 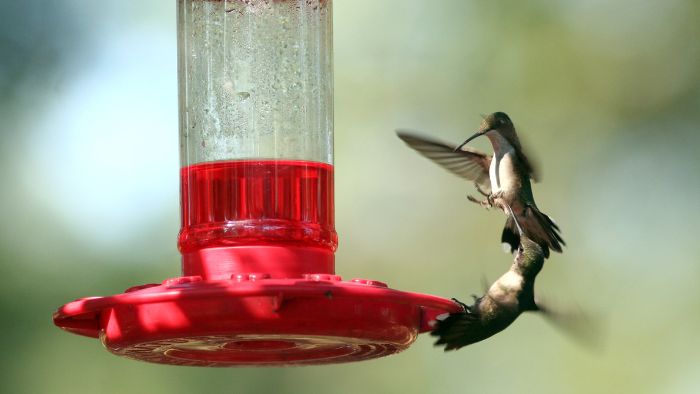 Due to their high metabolic rates, these birds need about seven calories per day which are largely derived from sugar that comes from their natural food source which is flowers. However, seeing that flowers fade quickly these little flappers constantly search for fresh blooming patches. When they locate a source of nectar, they guard it, and then you will witness feeder battles that can turn into life or death battles.

Hummingbirds require territories with access to nectar, water, and an insect diet. Most females will often mate with the males who have the best territory. Therefore, from the perspective of the female, the most aggressive and belligerent male is the most appealing. This is because he will protect the territory and produce robust offspring with a higher likelihood of living to adulthood.

So, now that you know why are hummingbirds territorial over feeders, you will have a better understanding of their aggressive behavior. It makes better sense why they compete over their food source. The male has a better chance of attracting the females’ attention when they have the capabilities of providing a consistent and long-lasting source of nectar.

How do Hummingbirds Fight Over Feeders?

So, we have answered the question, “are hummingbirds territorial over feeders?”, but what about the tactics they use when fighting to secure their territories? Seeing that these dainty creatures need lots of energy to go about their day, it is quite natural for them to defend their food supply. Have a look at the point below to understand how hummingbirds fight over their feeders. 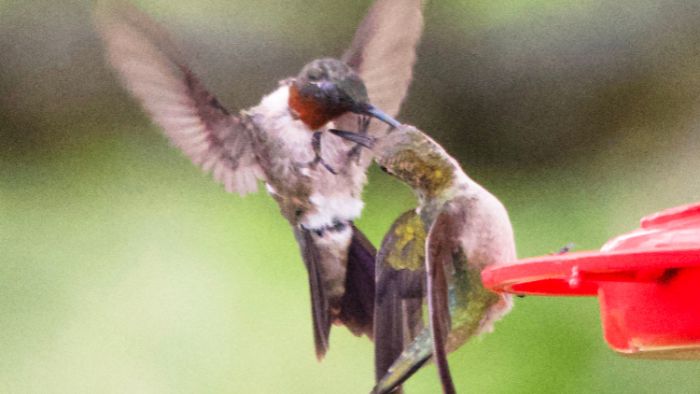 1. The dominant male typically occupies a perch that is elevated so he can watch the hummingbird feeder from a distance.

2. When another hummingbird, whether a male or a female, approaches the feeder, the dominating bird flies over with a loud irate wing buzz and chattering vocalizations. This is frequently sufficient to cause subordinate birds to escape without any harm being done.

3. The territorial bird pursues the subordinate bird frequently from a great distance. The combat intensifies if the intruder holds his ground.

4. After a battle of striking, biting, stabbing, and clawing, one bird typically gives up and flies off defeated.

5. Rarely, equally matched hummingbirds may sustain bodily harm or lose their lives during these battles. However, these occurrences are quite uncommon.

6. Keep in mind that when male and female hummingbirds fight with each another to gain access to a food source, it’s not as intense as when two men battle it out.

7. The Rufous Hummingbird is the most aggressive and protective of its feeder. They engage in combat with any bird that poses a threat.

8. Anna’s hummingbirds spend most of the year at feeders. Although they are slightly bigger in size, when the smaller Rufous show up in the spring, they soon drive the Annas away.

Click on the link to learn about hummingbird ecology. 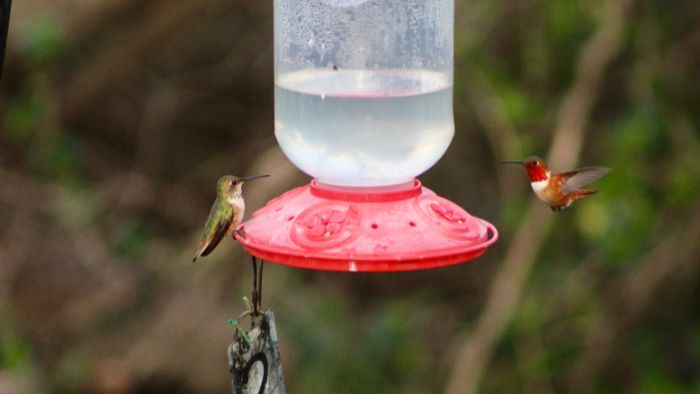 What to do When Hummingbirds Battle Over Garden Nectar Feeders

Have you noticed the territorial behavior displayed when male hummingbirds protect their feeders? The territorial instinct of a hummingbird is so strong that it frequently manifests itself in settings where it is not as necessary, such as at hummingbird feeders with an unending supply of sugar water.

Some are more aggressive than others, making them more likely to control and protect their food source. In fact, I doubt you’d believe your eyes if you witnessed how these tiny critters can put up a show when it comes to their food.

Here’s what you should consider when hummingbirds battle over garden nectar feeders: 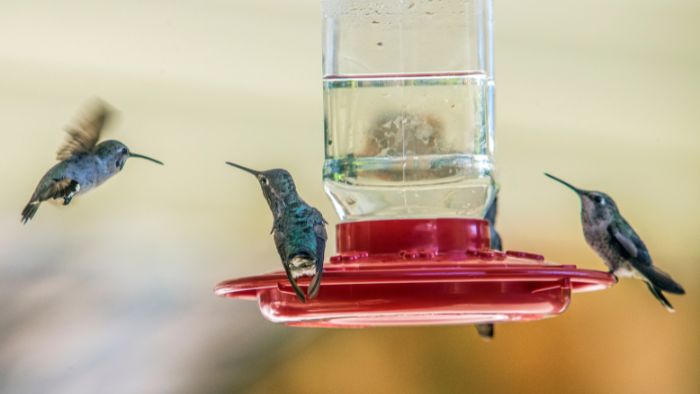 Hummingbird Behavior Around Feeders – What To Look Out For

Many bird species have unique defense mechanisms to keep would-be intruders out of their designated territories. Some pairs stick together to defend a steadfast territory all year long with songs and calls. Only during the breeding season does a male hummingbird sing to proclaim a territory in the marsh for himself and his numerous mates.

However, they also defend the hummingbird feeders by shooing away approaching birds. If that doesn’t work, then these tiny creatures resort to an aggressive approach. Hanging multiple hummingbird feeders is the only way to prevent them from fighting, as more is always better. Others can slink in for a sip while the bully hummingbird is gone pursuing an invader.

Naturally, the second-most dominant hummingbird takes over as leader while the most dominating one is absent, so the fighting still goes on. These battles amongst hummingbirds are less successful the more feeders there are. But, as a bird lover, rather than filling up one huge feeder, it is advisable to have multiple smaller ones to spread out ownership or territorial rights amongst them.

How many of these relevant food sources are required to keep the peace amongst them? I would recommend between three to five of them be dispersed over the yard as it works wonderfully. Of course, maintaining them all would require a lot of commitment on your part. 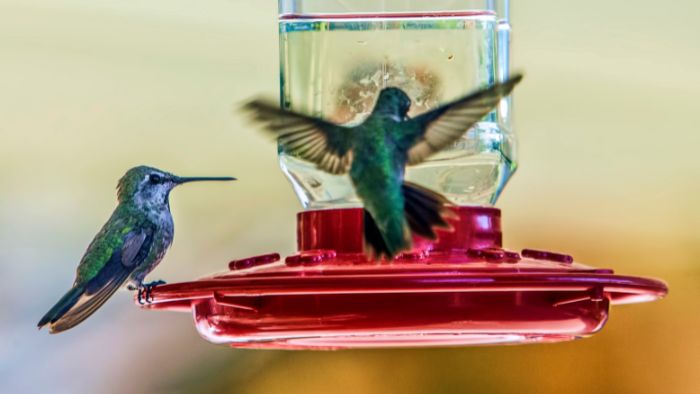 Although the male hummingbirds are more defensive, the females can also be quite territorial. This is because every hummingbird has a pecking order, and will engage in conflict at the feeder. However, keep in mind that just before nightfall, these birds are known to dine happily at the feeder as they sip their final nectar before complete darkness.

Maybe it’s the tiredness from the day’s efforts that renders them battle-free. But, don’t be fooled by this behavior as their territorial skills will be awakened come dawn, and they will again vigorously guard a good patch of blossoms or a feeder that they are familiar with if it has staked out that limited resource. Fighting for their food is a part of their nature and survival tactics especially when natural resources are low.

If you’re an avid hummingbird fan, then understanding them would be of great benefit to their survival. Although hummingbirds benefit greatly from the flowers that produce nectar, when supplies are low, feeders fill in to nourish them and keep them healthy.

To draw these critters, homemade nectar which is high in sugar is best. We hope that you now have a better understanding of the question, “are hummingbirds territorial over feeders?”. Here is a video with some great tips to reduce aggression at hummingbird feeders.