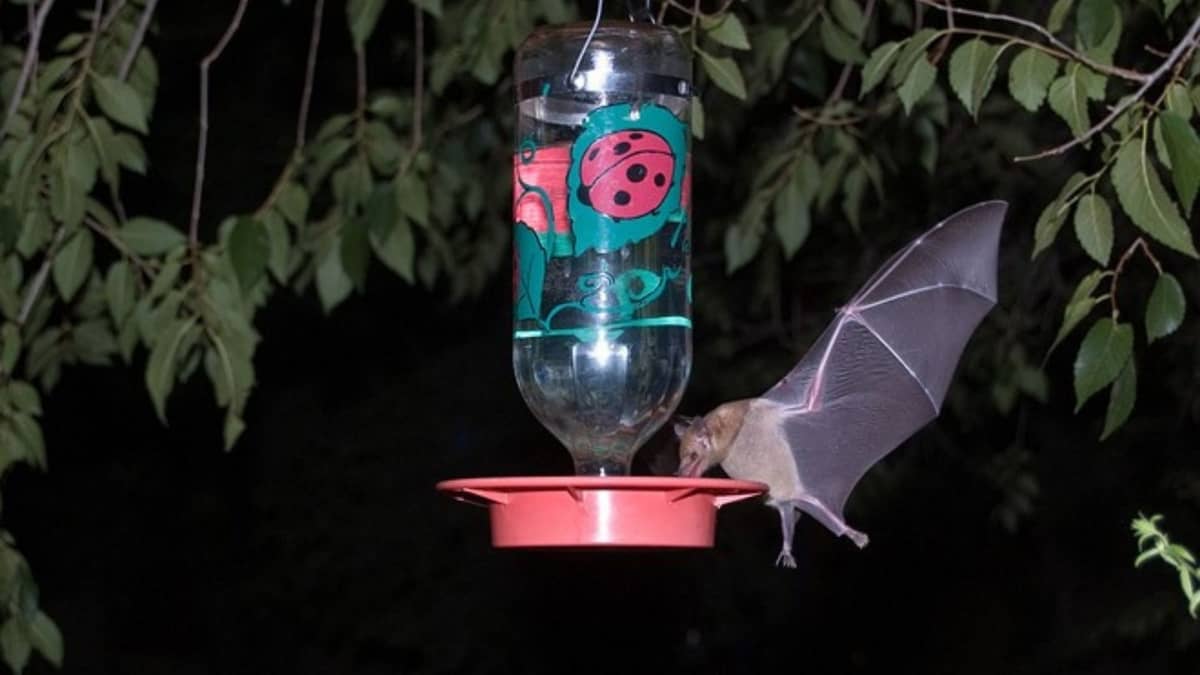 Hummingbirds can only drink so much that it’s impossible to empty a feeder in a day, so you might wonder do bats drink from hummingbird feeders? There are over 1,400 bat species globally, and you can find around 47 in the US. Bats predominantly feed on insects, but some species share the same food taste as hummingbirds.

Yards full of nectar-rich flowers and hummingbird feeders are often the target of food-deprived nectar bats. However, this causes trouble for hummingbird lovers. You go to bed with filled feeders ready to welcome the birds at sunrise. But you wake up to empty feeders and no sign of hummingbirds! Bats, however, are not the only night visitor. Read on to find out what’s draining the nectar from your feeders.

Bats are nocturnal animals that spend their days hiding in bushy trees, caves, rocks, and even house attics! At dusk, they set off to find water at nearby lakes, ponds, or fountains. But they don’t drink from the source! Instead, they dip parts of their body and then lick the water.

Do bats drink from hummingbird feeders? Nectar bats do! Their body is adapted to their food needs. Similar to hummingbirds, they have thinner and longer muzzles with long tongues. 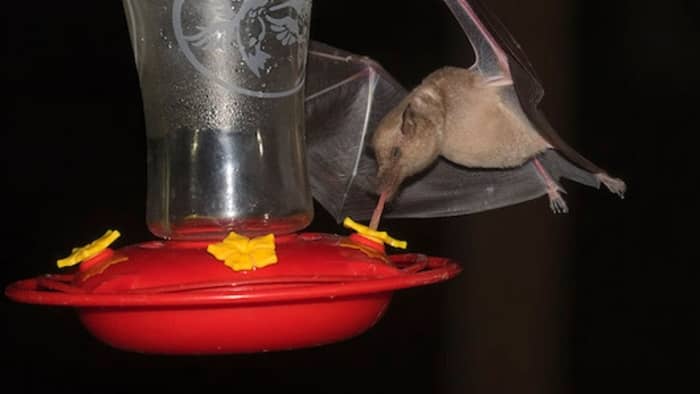 Signs Bats Are Visiting Your Feeders

1. Empty Feeder in the Morning

As the sunsets, hummingbirds find their shelter and go into the dormitory phase called torpor. They never wake up to go hunting for insects or look for nectar. So a feeder can’t get drained overnight by hummingbirds. Nectar bats are slightly larger and can devour a full feeder in a night.

2.Bat Droppings Around the House and Yard

The bat droppings are called guano and can cause trouble in large numbers. When they accumulate in a large quantity, they attract insects. The guano is similar to mouse or rat droppings, black and powdery when pressed.

3. Mess Around the Feeder

Unlike the gentle hummingbirds, bats are messy drinkers. As they slurp the nectar, they can leave a sticky mess that attracts ants, bees, and other insects. So if you wake up to an empty, messy feeder with a saucer full of insects, no need to wonder do bats drink from hummingbird feeders.

Two types of nectar-eating bats come to the US: the lesser long-nosed bats and the Mexican long-tongued bats. Both of these species make their way from the desert of Mexico to southwest America.

Nectar bats feed on nectar-rich flowers of cacti and agave. Then why do bats drink from hummingbird feeders? Unlike hummingbirds that combine insects and nectar, these bats get most of their calories from nectar and a small portion of protein from the pollen.

Nectar bats are endangered species. Most of their natural habitat is destroyed, so they resort to hummingbird feeders to survive. A large portion of their population was killed while decreasing the number of rabies-carrying vampire bats.

Bats pollinate cacti and agave flowers on their migratory route. The Sonora desert in Arizona is a good example. Many cacti here get pollinated by birds, bees, and bats. As the pollinated flowers grow into fruit, they’re also a source for the bats. The desert has limited food, so the fresh, sweet, and watery fruit is the perfect bite.

Learn more about When Do Hummingbirds Leave Oklahoma?

How To Bat Proof Hummingbird Feeder

We got the answer to the burning question: do bats drink from hummingbird feeders. Now how can you stop them? 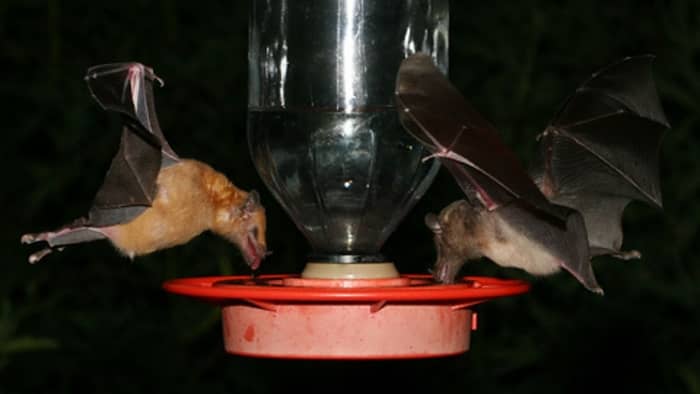 The only foolproof way of keeping the feeder safe from bats is to empty it or bring it inside every night. Hummingbirds go to sleep as the sun sets, so you won’t deprive them. But you must set up the feeder with the first sun rays as the hummingbirds will look for food as soon as they wake up.

You can also cover the feeder with a well-sealed box. Unfortunately, this also means you have to get up and remove the box so the hummingbirds can gain access.

Letting bats feed is not such a bad idea. They kill mosquitoes and other bugs but don’t hurt hummingbirds.

Is Sugar Water Good For Bats

Do bats drink from hummingbird feeders because they like the sugar water? Nectar bats prefer to feed of flowers’ nectar and pollen. But when food supplies are scarce, they will resort to hummingbird feeders. The nectar serves as a suitable replacement.

The 4:1 ratio is also ideal for bats. But unlike hummingbirds, bats devour as much as possible, fly away to relieve themselves, and then come back for more nectar. 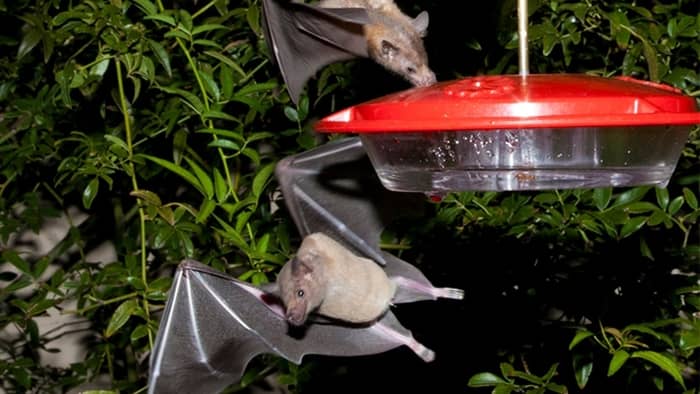 There are two types of flower bats like: rich in nectar and rich in pollen. But do bats drink from hummingbird feeders when there are flowers around? Bats actually prefer the flowers and chose them over the feeders.

The Saguaro and Organ-pipe cacti are dominant in the natural habitat of the nectar bats. These flowers have adapted to the bats and open only at night.

You’ve protected your feeders from bees, insects, and other predators only to find them empty each morning. Do bats drink from hummingbird feeders? The answer is yes, but not the common brown bats.

Two types of nearly extinct nectar-eating bats migrate to the southwest US. When nectar-rich flowers are scarce, they make their way to your feeders. They can co-exist with hummingbirds, but you will have to refill the feeder more often. 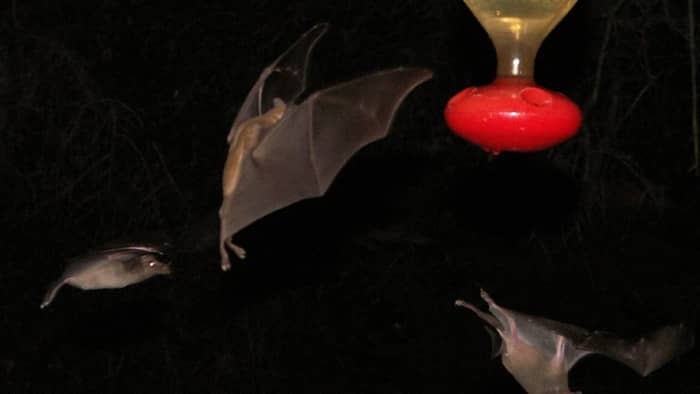 What is emptying my hummingbird feeder at night?

Hummingbirds can't drink a full feeder in a night, since they sleep until sunrise, so it's probably bats. As nocturnal animals, bats are most likely to attack your hummingbird feeder. Squirrels, raccoons, and other insects are less likely. However, bears also devour nectar, so if you live in the outskirts, keep this in mind.

There are over 40 different types of bats, and nectar bats are one of them. Just like hummingbirds, these bats can feed off nectar from flowers. Unlike other bats, nectar bats have longer muzzles to dive into flowers easily.