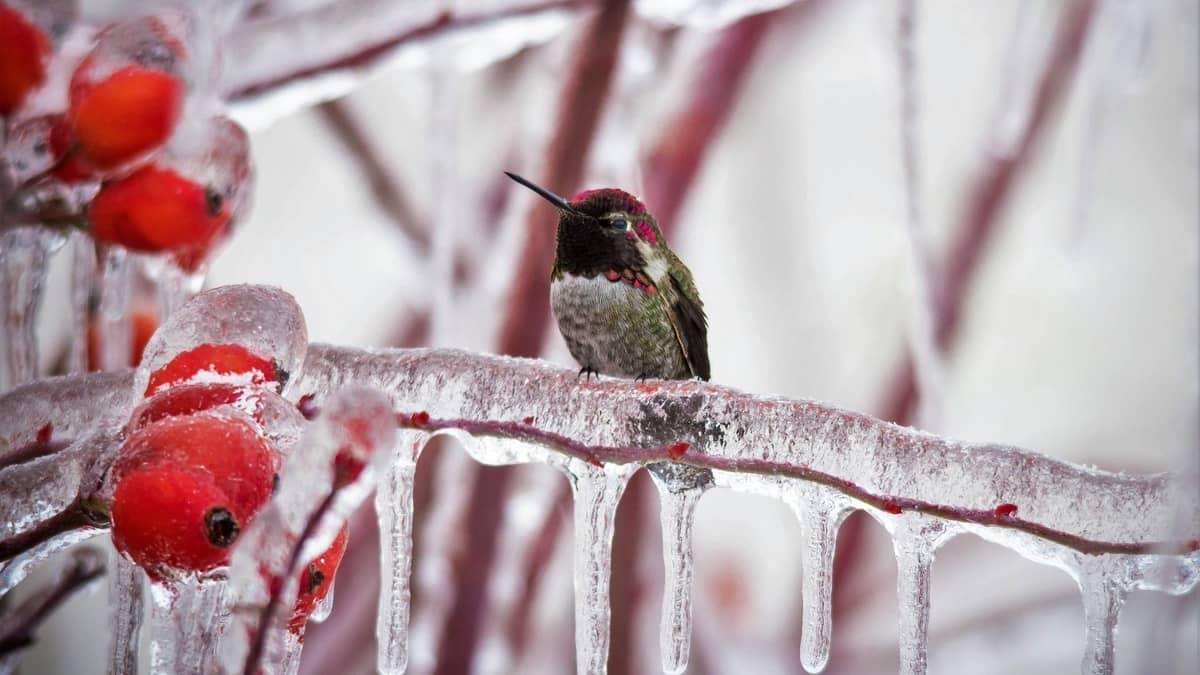 How do you really think the tiny beautiful hummingbirds survive the very cold winter period? The hummingbirds are the world’s smallest birds. So, a glance at them will show that they look really small and frail, so you may wonder how they are able to cope during winter.

As a hummingbird enthusiast, you would notice that a few hummingbirds may still be very much around during winter. These hummingbirds are usually accidental species that may simply be passing by as they migrate to their winter grounds.

Now let’s delve into how do hummingbirds survive the winter.

What Do Hummingbirds Do In The Winter 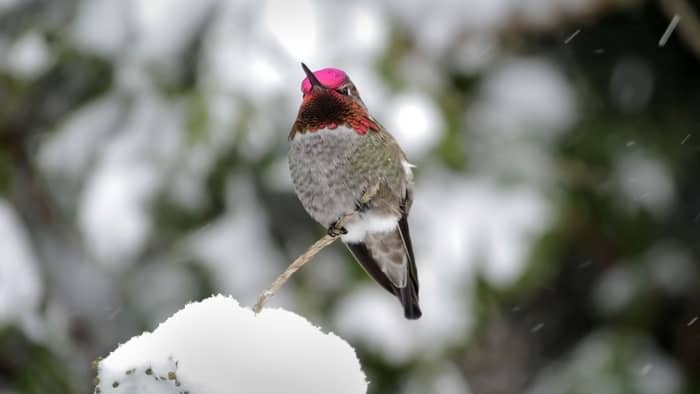 Although hummingbirds look very fragile and small, they can be very tough. One way they demonstrate this is by their survival ability even during winter.

During cold weather and winter, the bodies of hummingbirds enter into an energy conservation mode which is called torpor. According to research, hummingbirds that stay north for the winter often experience a mini-hibernation every night.

During this period, their 107-degree body temperatures can drop to as low as 48 degrees. Also, their heart rates slow down during the period. So the blue-throated hummingbird for instance can drop its heart rate from 1,260 beats per minute to about 50-180 beats.

Another thing that hummingbirds can be found doing during winter is to change their diets, eating more insects. The reason for this is that nectar flowers become scarcely available during this period.

While some species can remain during winter and still survive because of the above ability, others would rather migrate during winter.

Where Do Hummingbirds Go In The Winter And How Do They Get There?

Those species of hummingbirds that can not cope so well with the cold usually migrate before the winter. Or the species that aren’t resident and are migratory will leave. They do this in a bid to seek spring advantage in other territories. 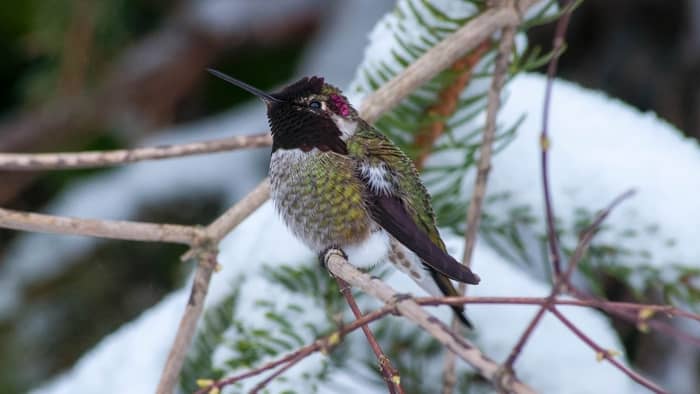 Different hummingbirds usually have their different routes, however, most of them in North America usually migrate to Central America or Mexico for the winter. This allows them to avoid the cold and to follow their food sources, which are basically flowering plants and insects.

Right before they begin to migrate to their wintering ground in Central America and Mexico, they usually gather up a good amount of fat. This means hummingbirds will feed closer to their migration period. They can double their size just to fuel their energy for their journey.

Can Hummingbirds Freeze To Death? 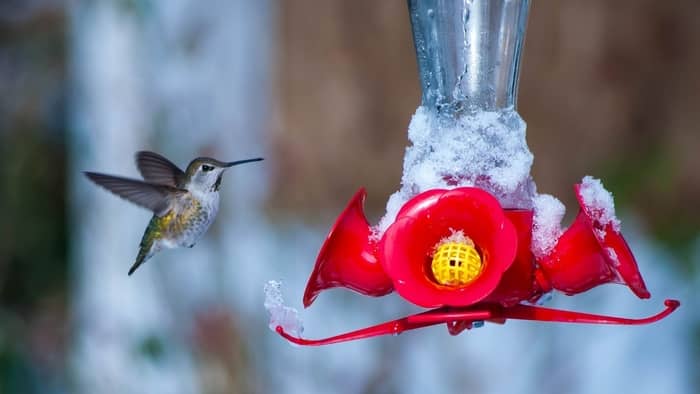 There are however a few things you can do to help a hummingbird during very cold weather conditions. These include:

Where you have feeders outside for the birds, you can help them during very cold weather by warming their sugar-water solution. When you do this, they consume less energy digesting the warm food and as such can conserve more energy.

·By lighting a warmth giving bulb around their feeders

By putting a handyman-style light fixture or bulb with the ability to give warmth, you help the birds with the cold. The warmth from the bulb can help keep them warm at night. You may even notice some hummingbird sleeping near the bulb.

Another way of helping hummingbirds during very cold periods is by providing a little birdhouse or shade for them.

Bad weather such as heavy rain, heavy storm, and so on are things hummingbirds have to overcome. Hence, you can always do your part by helping in the little way you can.

Where Do Hummingbirds Sleep In Winter?

During winter, hummingbirds sleep mostly on tree branches and enter into a torpor state. These birds during winter may even hang upside down, with their bills pointed upward, feathers fluffed, and a complete lack of motion.

In this state, they may even look dead. But take note, they aren’t actually dead but in deep hibernation.

Once they enter into this torpor, their heart rate and the temperature drop considerably. Just before dawn, the birds come out from this torpor state. It can take a hummingbird up to 20 minutes to an hour to come out of this deep sleep known as torpor.

Do Hummingbirds Go About Their Usual Activities During Winter?

During winter, hummingbirds can continue to feed on flower nectar particularly during the day.

In addition to nectar which begins to reduce during this season, they consume a large number of small insects. Hummingbirds naturally have a very voracious appetite, so they need to feed even during winter.

In a bid to keep their energy requirement during winter, they reduce their activities and are concerned primarily with eating and getting more energy.

So during the day, they mostly go about their usual daily activities and enter into torpor at night to survive the very low temperature. 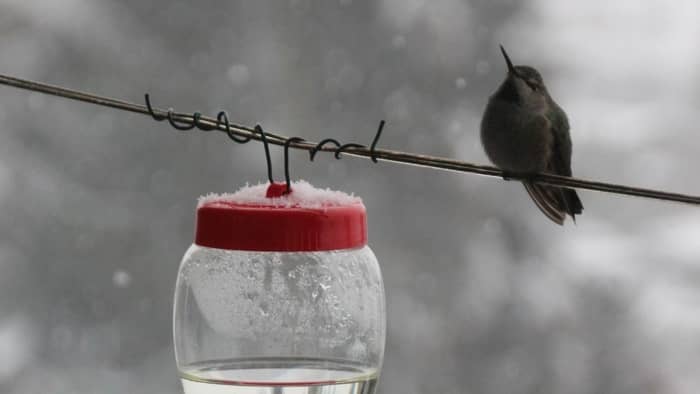 Conclusion On How Do Hummingbirds Survive During The Winter

Hummingbirds may not be directly associated with winter, but there are still some things that occur during this period.

Hummingbirds as you have seen above have the natural ability to survive extreme weather conditions. You can however aid their survival by doing a few things to make it easy for them as the cold season approaches.