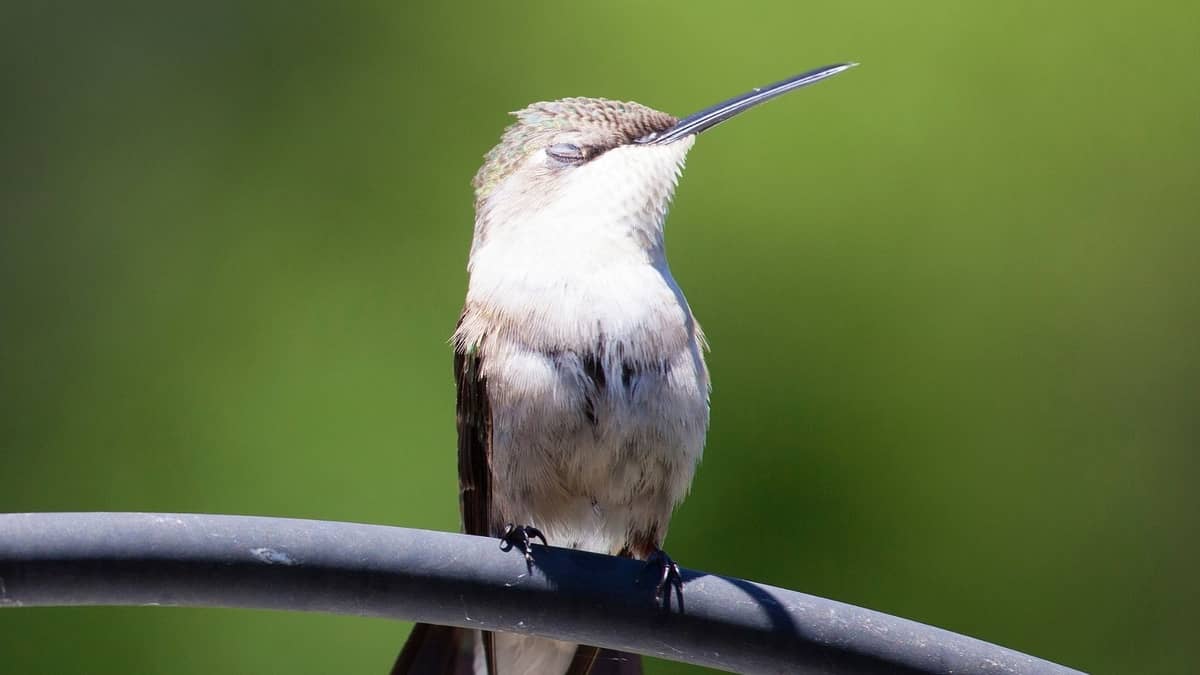 Last Updated on November 20, 2021 by Guillermina

Gazing at hummingbirds tirelessly flying all day, you may wonder how long do hummingbirds sleep at night to make up for their tiresome day? Knowing that they’re most active during dusk and dawn, there seems to be a little time left for them to even nap. Do hummingbirds even rest? Surprisingly, hummingbirds can fit as much sleep in their day as a newborn baby!

Read on to find out when, where, and how long do hummingbirds rest every day.

How Does A Hummingbird Sleep

Hummingbirds rest for 8 to 16 hours per day, and usually an average of 12 hours. They’re solitary birds which means they sleep alone. The only time you can spot a group of hummingbirds is when a mother sleeps with her babies.

Although, at first sight, hummingbirds look small and fragile, they’re built to withstand harsh conditions. Even more so, they can regulate their body temperature without needing to cuddle next to one another.

Hummingbirds go to sleep at dawn, about half an hour after the sun goes down. You won’t spot them until the sun rises the following day. One to two hours before the sun rises, their hormones trigger a state of waking up. 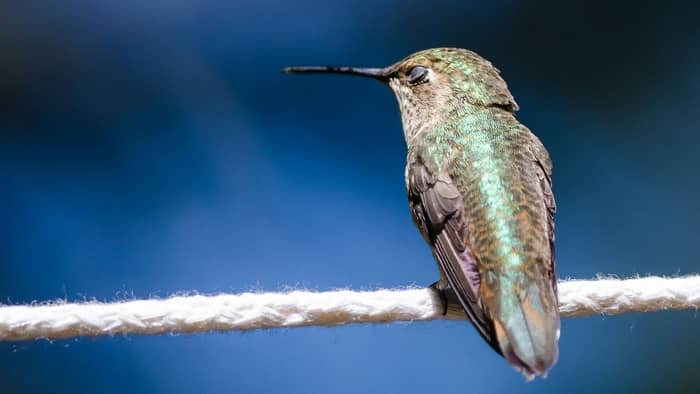 Do Hummingbirds Eat At Night?

Hummingbirds spend their days eating or looking for food. Whether it is insects or nectar, they need half their body weight in food to survive. But an hour before dusk, they retrieve to their sleep spot. Once they enter the torpor state, they don’t wake up to eat until dawn.

Hummingbirds eat the most before sleep and soon as they wake up. At dusk, they build reserves to survive the night. They’ve used all their resources by morning, so they’re back at the starting point.

How Often Do Hummingbirds Sleep

Hummingbirds sleep every day, but only during the night. As soon as the sun sets, they prepare for their nighttime rest. So the amount of sleep they get primarily depends on the time of year. When there’s less daylight, they sleep longer.

It’s a rare sight to see a sleeping hummingbird during the day. Their process of waking up takes about two hours. So if a hummingbird naps, the wake-up time will be longer than the nap!

Suppose you spot a sleeping hummingbird during the day; that’s not a good sign. When hummingbirds rest at night, their whole body goes into energy-saving mode. As a result, their temperature, breathing, and heart rate significantly drop. If the bird goes into rest mode during the day, it means it lacks food, or the weather conditions are too bad to go searching.

Do Hummingbirds Sleep Upside Down 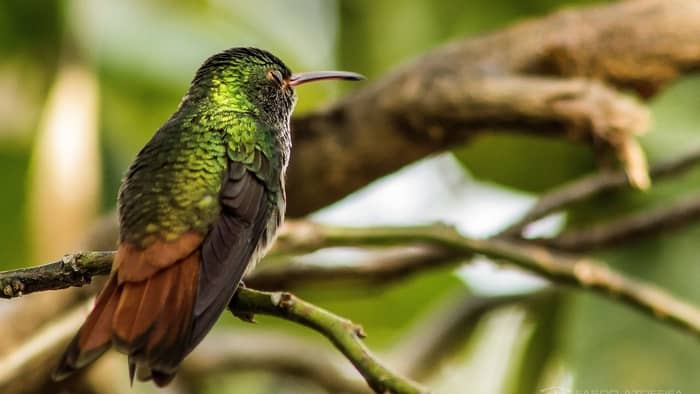 Hummingbirds can be funny sleepers. Once they fall asleep on a smooth surface like a feeder, they might hang upside down. Once they enter the torpor state, they can slip and hang upside down the whole night. However, it’s not a given that all hummingbirds hang when they sleep. And if you see one, don’t be scared – they’re alive and well, just need some rest!

A Bat Or A Hummingbird?

Bats are another species that sleeps upside down but for totally different reasons. They’re mammals, not birds, so they sleep upside down to protect themselves from predators. Bats wrap their wings around their body, resembling a cocoon, and hibernate. Don’t worry – bats and hummingbirds rarely reside in the same areas, so it’s not so easy to mistake one for the other.

Where Do Hummingbirds Sleep In The Winter?

Hummingbirds are known to migrate at the first sign of fall. So you’ll notice how most of them leave your area by the middle of October. Some, however, never migrate and spend the winter in the same place. The Ruby-throated hummingbird is probably one of the most common hummingbirds you can spot during winter. Wonder where they’re sleeping on those cold nights?

Hummingbirds look for a sheltered spot away from the wind. This is usually among twigs and tree branches. They sleep in the same place every night. They will look for a location that’s safe from predators and close to a food source. Hummingbirds are territorial and loners, so they won’t allow anyone else in their sleep spot. During the coldest time, they’ll go into torpor each night as a way to keep their energy. 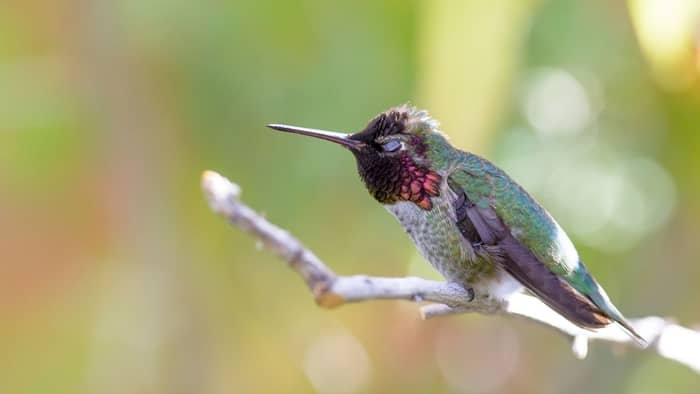 Torpor is a state of reduced activity and metabolic rate and can be seen in many animals and plants. This allows them to survive when the conditions are not as good, the temperatures are low, or there’s a lack of food.

Do Hummingbirds Shut Their Eyes While Sleeping?

Hummingbirds shut their eyes when they enter the torpor state. If you see a hummingbird with open eyes hanging upside down, it’s probably about to enter or exit its dormancy. 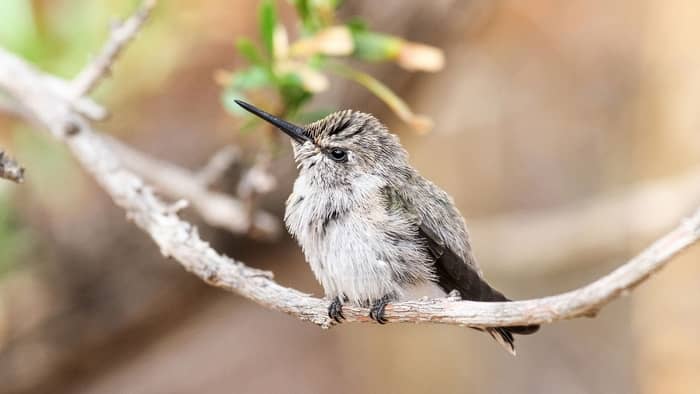 Hummingbirds spend an average of 12 hours every day sleeping. They go to sleep at dusk and wake up at dawn. When the days are longer, they spend less time sleeping and vice versa. Their sleep is called torpor – a state of lowered bodily functions. This way, they preserve energy and waste only a fraction of calories.

Hummingbirds sleep with their eyes closed, upside down, and well-protected into trees. They have one sleep spot and don’t let anyone near. Spotting a sleeping hummingbird during the day is rare and can mean they’re not getting enough food.

Have you seen a sleeping hummingbird before? Watch your feeder; they might fall asleep and hang there the whole night!