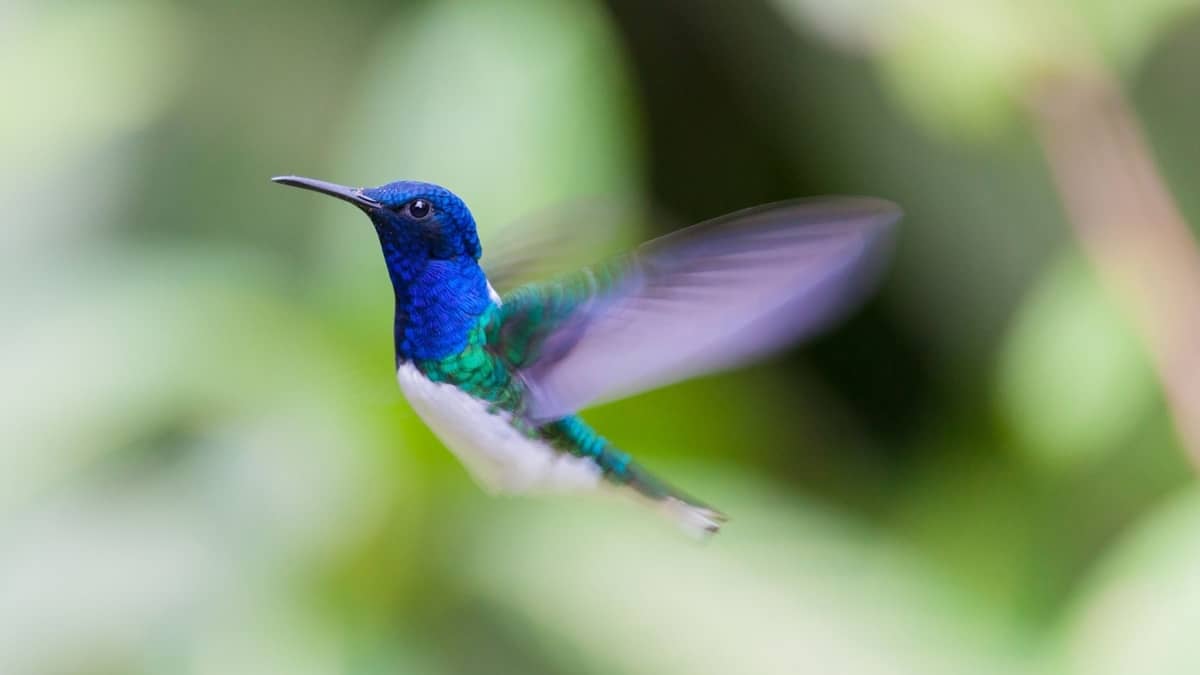 These tiny feathered hummingbirds are amazing flyers that we love to see in our yard. They are helicopter-like flying birds that tend to flap their wings so fast. With such vigorous flapping of wings, you may be wondering how many times does hummingbird flap its wings per second. Let’s find out.

It’s no doubt that hummers are fast-flying birds. They are capable of hovering in a spot meaning they will remain in the air without moving forward, backward, up, or down. They are simply amazing flyers. They also tend to flap their wings so fast that the wings generate that ‘hum’ sound.

In this article, we will be looking at how many times does a hummingbird flaps its wings per second and more info related to this. So, continue reading to know more about this.

How Fast Does A Hummingbird’s Wings Go?

There are over 360 species of hummingbirds known worldwide and most can be found in South America. Hummingbirds are known for their fast-flying acrobatic skills. When they are in their flight action, their wings move so fast that all you may only notice is a blur.

They have so many fascinating and special skills which make them interesting to watch by bird lovers. They tend to beat their wings in a figure-eight pattern that is similar to insects. 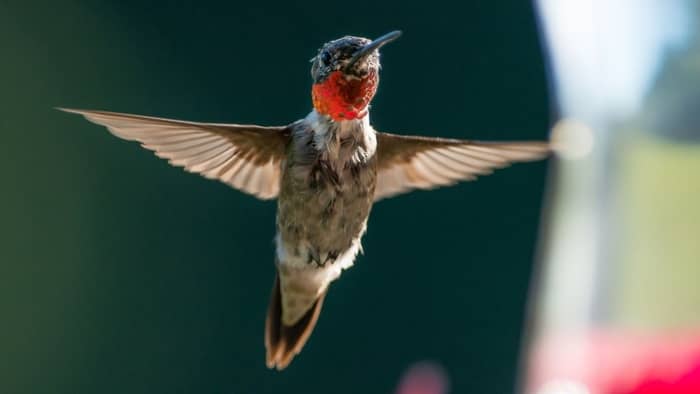 How Many Times Does A Hummingbird Flap Its Wings In A Minute?

Let’s take a look at some hummingbird species and how many times they flap their wings per second or per minute:

How Many Times Does A Hummingbird Flap Its Wings Per Second

How Fast Can A Hummingbird’s Wings Beat? Generally speaking, the average wingbeat for North American hummingbirds species is about 53 beats per second and 3,180 beats per minute.

The fastest recorded hummingbird’s wing beat is about 80 beats in a second and this record is from the Amethyst wood-star hummingbird species. The Bee hummingbirds also have a similar wing beat of around 80 beats per second.

Then the lowest hummingbird wing beat is around 10 to 15 beats per second and they are from the Giant hummingbird species. 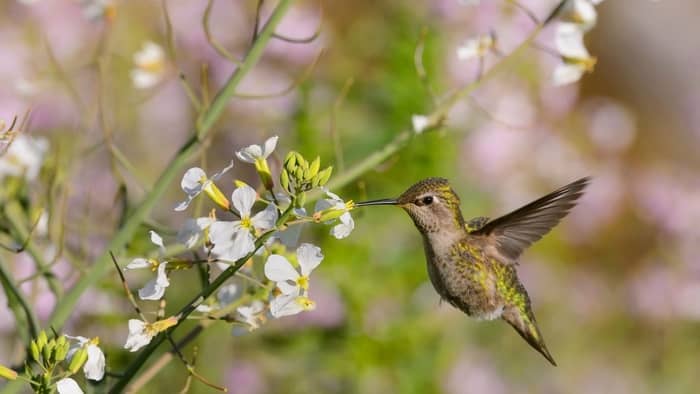 1.    Ruby-throated Hummingbird Species: How Many Times Does A Hummingbird Flap Its Wings Per Second?

For example, the male Ruby-throated species can have about 50 beats per second when they are in their courtship flight. Hence, their wing flap beat per minute would be around 3,000. 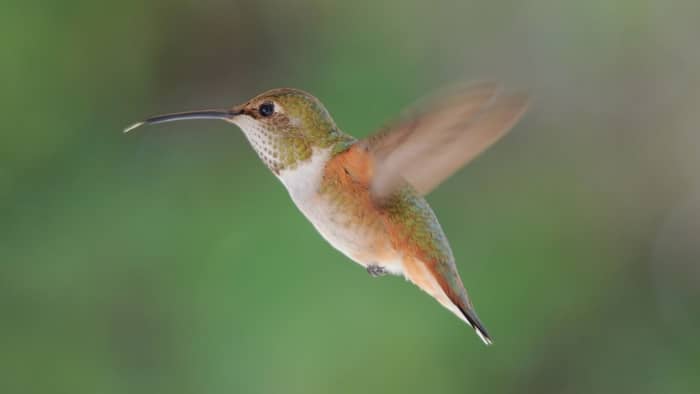 Anna’s hummingbird species is one of the smallest birds known in the world. Their wings can flap around 40 to 50 in a second while they are in-flight action. Therefore, Anna’s hummingbirds tend to flap their wings around 2,400 to 3,000 in a minute.

Broad-tailed hummers tend to flap their wings around 50 wing beats per second during their flight mode. Hence, their wing beat per minute is around 3,000 beats. 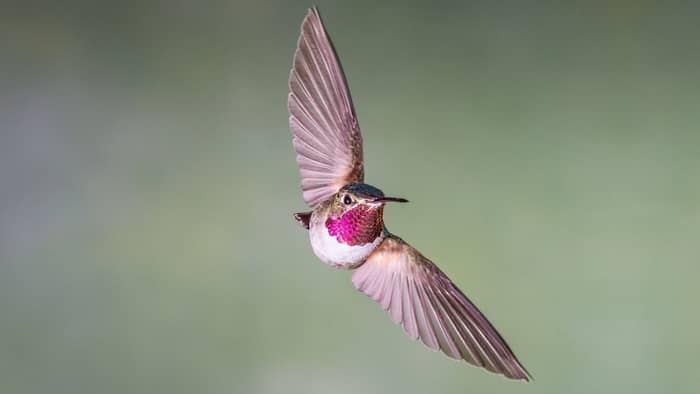 The Bee hummingbird is one of the smallest hummers known in the world weighing around 2 grams and 2 inches in length.

They are also fast-moving hummers that have their wings flapped about 70 to 80 beats per second. Meaning their wing beat per minute is around 4,200 to 4,800 beats while in their flight mode. 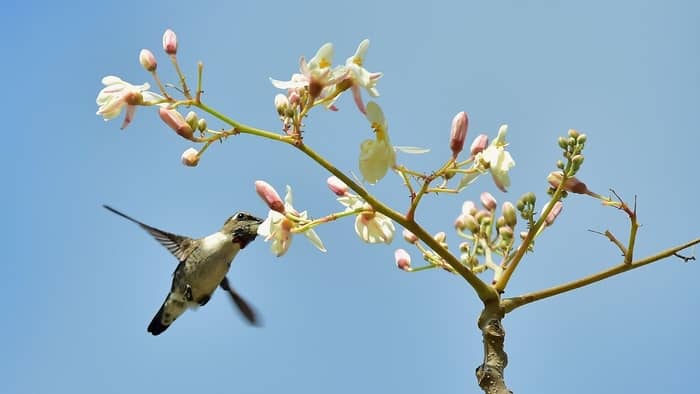 Amethyst wood-star hummers have their wing flapped around 80 beats per second. This means they can flap their wings 4,800 per minute.

Just as hummingbird’s wings flap so fast, they also tend to have fast heart rates. Their vigorous or fast activities make their heart rate go so fast.

How Many Times Does A Hummingbird Flap Its Wings Per Second: Conclusion

Hummingbirds are fast acrobatic flyers that can hover around just like a helicopter. The number of times a hummingbird will flap its wings per second mainly depends on the species. Hummingbird’s flap wings can go dozens in just a second.

But generally speaking, hummingbirds can flap their wings around 10 to 80 beats per second which are about 600 to 4,800 beats per minute.

Read more about How Often To Clean Hummingbird Feeder