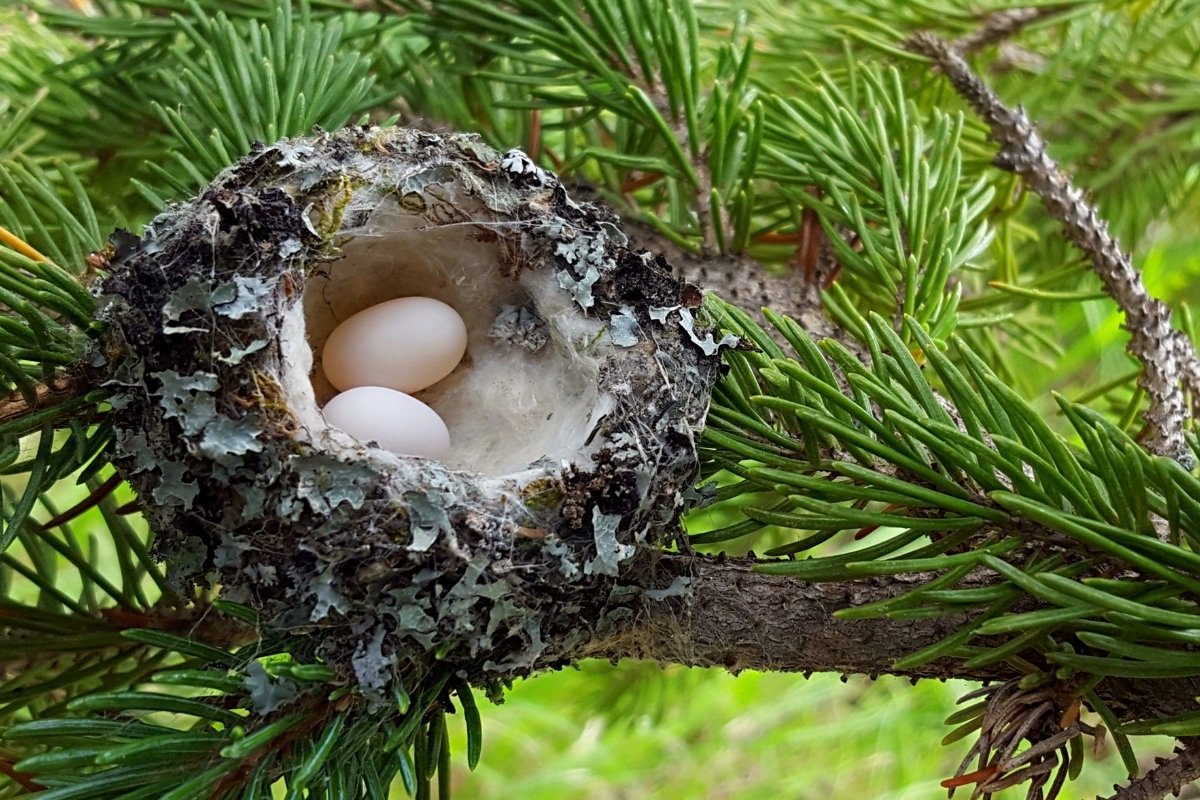 The time has come, hummingbirds mate, and you’re expecting to see the babies, but how long is the hummingbird egg incubation period? The mother hummingbird is an expert at preparation, starting her nest even before mating. It’s hard to spot when the young ones hatch, but you can often witness the mating period.

Male hummingbirds do extraordinary dives, often descending from 100 feet in height to impress the female. How long after the show can we expect to hear the chirping of the baby hummingbirds? Read along to learn more about the hummingbird egg incubation period.

Hummingbird mating season spreads all the way from April until July. Depending on when you get your hummingbird visitors, you can sometimes tell they’re ready for mating. The most common sign is a female hummingbird flying in and out of a bushy tree.

Hummingbird females mate once to thrice a year, while the males can mate numerous times. They’re not monogamous, so the male can mate the next day with another female!

The largest responsibility of nesting and raising the hatchlings fall on the female hummingbird. Once you stop spotting the female, it’s the start of the hummingbird egg incubation period. She’s probably in her nest keeping the eggs warm.

How Many Eggs Do Hummingbirds Lay

Hummingbirds lay between 1 and 3 eggs per mating. They can lay up to 3 broods per year, but most of them only lay 2 broods. Do hummingbirds use the same nest twice? The female hummingbird is responsible for each brood, and she never reuses a nest.

The hummingbird eggs are the size of a jelly bean, with 0.5 inches in length and 0.3 inches wide. The whole nest is 1.5 inches in diameter. Hummingbirds lay their eggs 24 to 48 hours after mating. Since the nest building process takes approximately a week, the female hummingbird knows she has to prepare in advance.

How long can a hummingbird leave her eggs? During the hummingbird egg incubation period, the female doesn’t rely on the male to bring food. She has to leave the nest for brief moments to get food in order to survive. That’s why she strategically builds her nest in a safe area, away from predators and close to a food source.

What Happens After Hatching?

After the hummingbird egg incubation period passes, the eggs hatch. They break out of their shell and are welcomed by their mother. Even after they hatch, the mother still lays on them to keep them warm since they still don’t have any down or feathers.

While adult hummingbirds often consume nectar from flowers and feeders, they can’t carry it to their young. The mother feeds the babies insects that she picks from spider webs and mid-flight.

After the hummingbird egg incubation period, there comes the nestling period. The baby hummingbirds are incapable of living independently from the first day, so they stay with the mother for 18 to 28 days.

During this time, they develop their full set of feathers, learn to fly, and how to find food. The mother guides the babies to the food source the first couple of times, after which she abandons the nest, and they fledge.

The hatchlings stay with their mother for up to 4 weeks, during which time they grow and develop feathers. Keeping this in mind, the mother hummingbird builds a soft and stretchy nest that can accommodate the birds as they grow.

Read more about How Far Apart To Space Hummingbird Feeders?

If you found a hummingbird egg on the ground, there’s little to no chance for it to be alive. The hummingbird might only abandon an unviable egg, and it will be cold by the time you find it. She rarely abandons the eggs, so if you see a deserted nest, the chances are a predator got the bird.

Check out 7 Surprising Facts About Feathers

3. Hummingbird Mothers Are Feisty During the Incubation Period

Hummingbirds build their nests at 90 feet altitude to keep the eggs protected from predators. But they don’t stop there. The mother hummingbird releases loud threatening noises to chase off even larger birds. They’re ready to fight anyone approaching their nest, and the Rufous hummingbird is known to be the most aggressive.

Unlike most birds, during the hummingbird egg incubation period and after hatching, the female has to leave the eggs for a brief period of time to get food.

How long can a hummingbird leave her eggs?

The hummingbird can't abandon her eggs for too long as they have to be kept at a constant temperature of 96℉, especially in the middle of the incubation period. She might leave the eggs at the beginning for up to 24 hours since they still haven't started developing.

Do hummingbirds use the same nest twice?

No, hummingbirds don't reuse the same nest, but they might use the same location for the next brood if they find it safe enough.

What happens if only one hummingbird egg hatches?

All hummingbird eggs would hatch at the same time, even if one was laid a day later. Hummingbirds can recognize unviable eggs, and they won't lay them. The mother will abandon the unhatched egg.

How long do hummingbirds stay in their nest?

Hummingbirds stay 3 to 4 weeks in the nest after hatching. They develop their plumage and learn to fly and find food during this time.