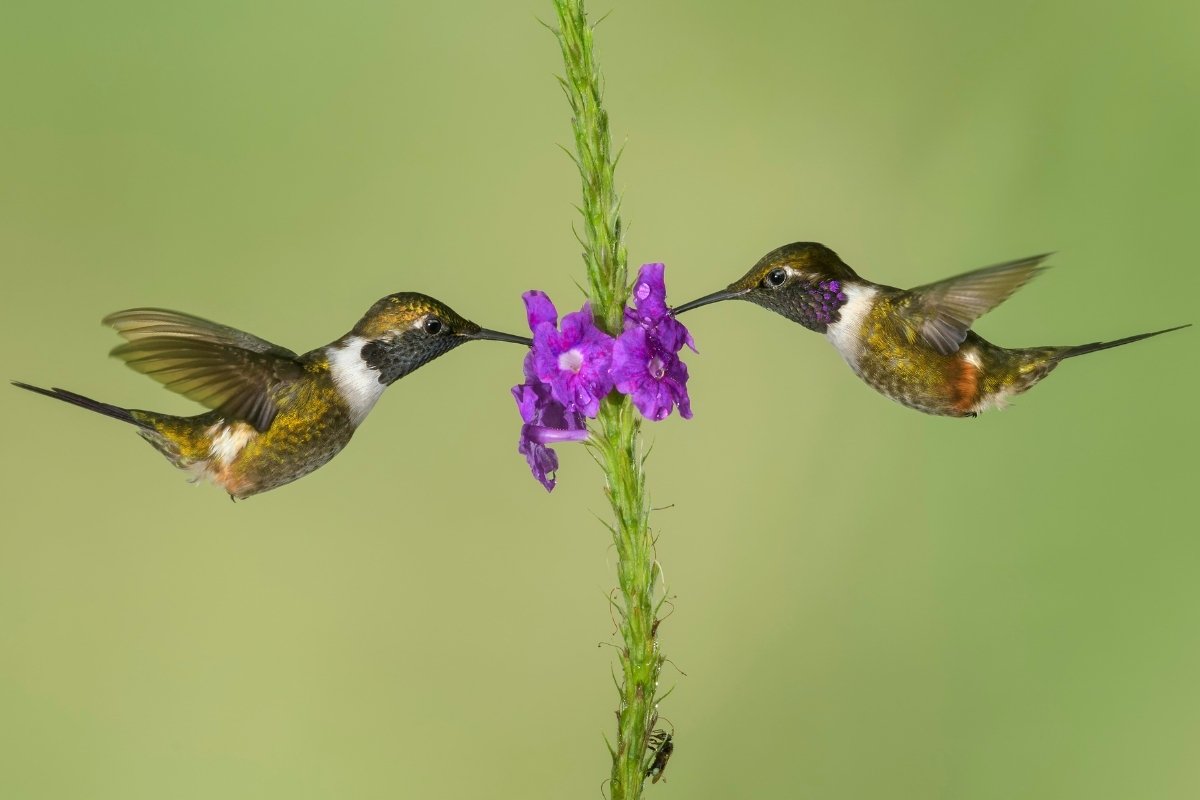 Each group of birds has a unique name, but have you ever wondered what do you call a group of hummingbirds? It’s not a gulp or congress, neither a flock nor a brood.

Hummingbirds are special in many aspects. While most birds live and migrate in groups, the hummers prefer to be alone.

Many bird couples take care of their young together. But not hummingbirds. In fact, they’re not much faithful either; they can mate with more than one partner per season.

So what if you get lucky and spot a group of hummingbirds? Read on to find out their name.

Inside The Hummingbird’s Behavior

Hummingbirds are solitary animals that don’t long for interaction with other birds or humans. Their mating process takes no more than a few seconds, after which they leave.

Things are no different when it comes to nesting and taking care of their young. The mother bird takes care of the babies for around 3 weeks, shows them where to get food, and chases them off to live alone.

The female can brood a few times per season, repeating the same process which each new generation. So the question is not what do you call a group of hummingbirds, but when can you see one?

The feeders in your garden as the likeliest spot where you can spot a group of hummers. They unwillingly share a feeding spot but then fly their own way.

What do you call a group of hummingbirds that travels together? Well, there’s zero possibility to spot one. We’re used to spotting large flocks of birds forming different shapes in the sky when leaving or arriving. This process is called a murmuration and can’t be seen in hummingbirds.

These solitary birds might live in the same area and migrate to the exact location as others, but they always do it alone. Even the mother bird doesn’t take her young while migrating. They’re ready to fly soon as their internal clock signalizes it’s time to look for territories with warmer temperatures and longer days.

What Is A Hummingbird Flock

If you’re struggling to find an answer to what do you call a group of hummingbirds, it’s because there was never a need to come up with a specific name. These birds don’t socialize and form groups, so ornithologists didn’t find the need to label their groups strictly.

In most bird groups, there are specific roles. When you see a bird flock in the sky, each bird has gotten its place due to its ability. This is not the case with the tiny but mighty hummingbird.

Let’s say you need to know what do you call a group of hummingbirds visiting your feeders. You can call them charm, bouquet, hover, glittering, or tune.

So how many hummingbirds are in a charm exactly? When you see more than one hummingbird, you can refer to them as a charm. You can use the reference even if they’re a couple of mating birds or just two hummers using the same feeder.

The main reason why it’s almost impossible for hummingbirds to live and move in flocks is their aggressive side. Hummingbirds, both males, and females are highly territorial.

They pick their territory depending on food and shelter. Don’t doubt their intelligence; hummingbirds know when and how much nectar each flower produces.

Once the male hummingbird chooses its territory, he defends it by attacking any other hummingbirds trying to cross or feed there. This is why you should space out your garden feeders, so one hummingbird can’t keep tabs on all of them.

Female hummingbirds mark their territory by nesting. However, two hummingbirds don’t nest in the immediate area, as some keep a territory of up to 1/4 of an acre. What do you call a group of hummingbirds it’s not something many know as you can rarely spot more than one hummingbird in an area.

Do hummingbirds have flocks after they mate? Yes, you can spot the mother hummingbird with her young during their fledging. First, she will guide them to the food and water sources a couple of times, teaching them to survive independently. Then, shortly after, she kicks them out of the nest.

Do Hummingbirds Fly in Flocks

However, it’s not a life or death situation. When the male hummingbird wants to attract the female’s attention, he puffs his chest feathers. So, logically, when two males fight, they pick out each other’s feathers. If you notice a rough-looking hummingbird, that’s probably a male that’s been in a few tight situations.

So what do you call a group of hummingbirds fighting for a female? They’re still referred to as a charm, bouquet, or glittering.

Bottom Line: What Do You Call A Group Of Hummingbirds

If you had some trouble finding out what do you call a group of hummingbirds, we have the explanation. Hummingbirds are solitary, territorial, and sometimes aggressive. They never travel or live in groups. The only exception is a mother hummingbird that cares for her young for 3 weeks.

Wondering what do you call a group of hummingbirds on your feeder? You can call them a charm, glittering, bouquet, or tune. But don’t expect to see this sight often. Instead, they unwillingly spend time next to each other on your feeder.

How many hummingbirds are in a charm?

There have to be at least 2 hummingbirds for it to be a group or a charm. You can also call the group a bouquet, tune or glittering.

Do hummingbirds have flocks?

Hummingbirds are solitary and territorial birds that spend their life alone. Therefore they never form groups like other birds. However, you can spot more than one hummingbird on a few occasions, when it's a mother with her young, on a feeder or when fighting.