Hummingbirds are such a dazzling sight, but have you noticed that you almost never see cubs, only adults? Since they are very small but also energetic, it is very easy to miss them in their early stages of life.

So, today we will talk about baby hummingbirds hatching and their development – the wonder of the natural world.

What Happens Before Baby Hummingbirds Hatching?

In order for hatching to occur at all, that is, for this journey to begin, these tiny feathered dynamos must first mate. Courtship rituals are incredibly diverse and vary among 350 species found in the Western Hemisphere. It is mostly associated with some kind of dance or an aerial diving display. Males of this species are the ones who use these dazzling performances to attract more mates during the mating season. 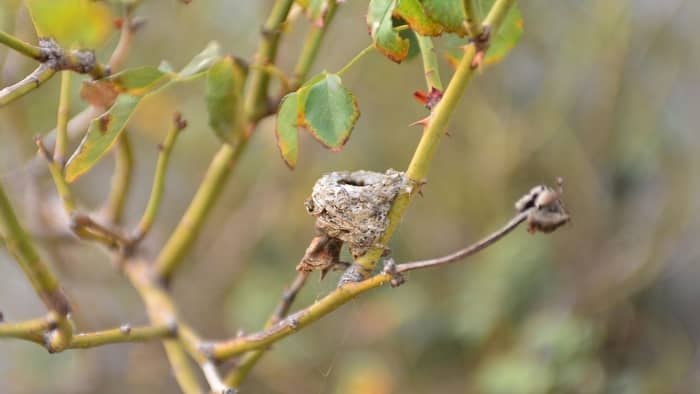 Did you know that hummingbird females build their nests before mating? Interesting isn’t it?

They build their nests 10 to 90 feet high, mostly on trees or shrubs, and there are a few exceptions depending on the bird species. The construction process itself takes less than a week. The spider web strands are used for construction as a base for attaching the nest to the branch. In addition, in slightly rarer cases, females use the leaves or a rock crest.

Once they are done, to make sure everything is ready for baby hummingbirds to hatch, the nest is insulated. This is usually done with thistledown, dandelion, or some other soft plant materials. Finally, some females tend to decorate the exterior with lichens, in order to camouflage the nest.

When & How Do Hummingbirds Lay Eggs?

When the eggs will be laid depends on the species as well as the climate. However, it is generally the most common season for nesting in May. This is especially true for migrating birds. Also, unlike non-migratory birds that lay several broods each year, migratory birds have only 2 or 3 broods per year.

Did you know that a female hummingbird lays only 2 eggs, but not at the same time? Namely, after laying the first egg, the female waits a few days before laying the second, although usually immediately the next day. The incubation process doesn’t begin until the second egg is laid. This is primarily because in that case, the baby hummingbirds’ hatching would happen at the same time. The process takes about 15 to 18 days.

In order for baby hummingbirds to hatch, the eggs should be kept warm without overheating. Until then, their mother will turn the eggs with her beak and legs several times a day. Generally, females sit on eggs for about 50 minutes every hour and spend 10 minutes away looking for food. Therefore, if you notice that hummingbirds are nesting in your garden, make sure that there is plenty of nectar available for the little birds so that they do not have to spend too much time outside the nest.

As for the appearance of the eggs, they are tiny and perfectly white, and can usually weigh somewhere between 0.4 and 1.4 grams. 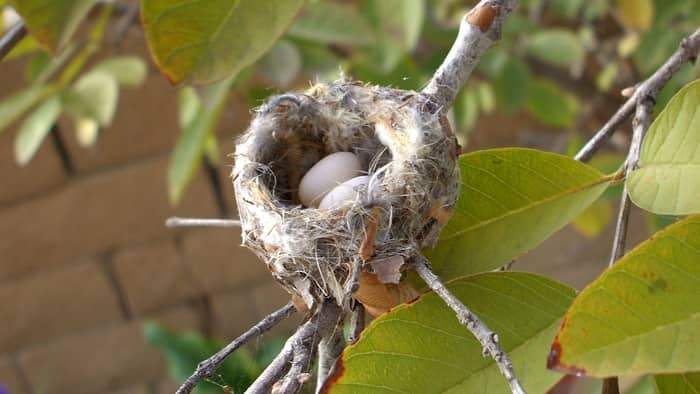 Once the internal temperature inside the eggs becomes constant, i.e. about 100 degrees Fahrenheit, it is finally time for the eggs to hatch. Hummingbirds hatch by using a sharp hook located on the end of their beaks. This hook allows them to hatch more easily.

After they hatch, their mother usually throws shells out of the nest to make room for the little birds. This happens because their nests are quite small and can only comfortably accommodate two baby birds.

Although many will call a newly hatched hummingbird a baby, ornithologists call it a nestling, hatchling, or chick. Hummingbirds are born completely bald and with their eyes closed. They are incredibly small, most weighing less than a dime. Two new chicks rely both on each other and their mother for warmth. In the event that one egg hatches or the mother have only laid one egg, it unfortunately rarely survives.

Although only weighs around 0.62 grams when it’s newly hatched, over the next week, the baby hummingbird will double in size and will start to develop pin feathers, thus being able to self-regulate its own temperature. In two weeks the bird will open its eyes, and after another 10 days, it will grow to almost full size and start fighting for space inside the nest.

The life of a hummingbird is truly a marvel of nature!

After mating, the female hummingbird lays two tiny eggs, two days apart, after which the incubation process begins and usually lasts 14 to 21 days. The mother sits on her eggs day and night and only leaves the nest for about 5 to 10 minutes every hour to nourish herself. Then a miracle happens and very small creatures hatch from the egg. That’s how their life begins.

That would be it, now you know all about baby hummingbirds hatching.

Are you the lucky one who managed to see the hummingbird chick? We look forward to hearing from you in the comments.

How Long Do Baby Hummingbirds Stay In The Nest After Hatching?

Hummingbird chicks usually leave the nest within 18 to 28 days after hatching.

Why Do You Never See Baby Hummingbirds?

It is very easy to guess, babies are so small when they are born, they weigh barely 0.62 grams, and they leave the nest only 18 to 28 days after hatching. By the time they start to leave the nest, the chicks have grown to almost full size.

In addition, their nests are so small and so well camouflaged that it's difficult to find them.

Where Do Baby Hummingbirds Go When They Leave The Nest?

When they start to leave the nest, baby hummingbirds occasionally come back to be fed by their mother. In addition, she will show them all the good places to catch insects and get nectar. After that, their mother will chase them off to live on their own.

How Soon Do Baby Hummingbirds Fly?