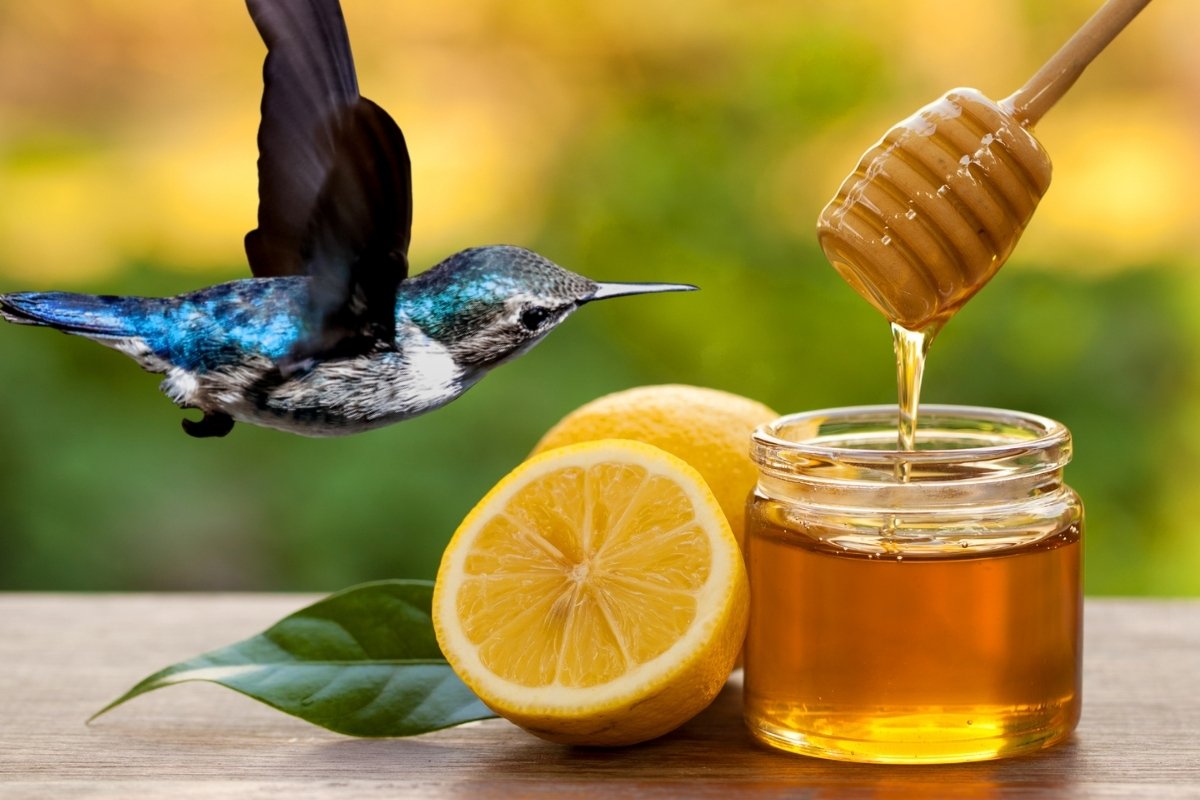 Can hummingbirds have honey? Find out if this superfood is just as good for hummingbirds as it is for humans.

Have you ever visited a garden full of hummingbirds? Isn’t that breathtaking? It is really difficult to describe in words how an individual must feel when for the first time in his life he meets dozens of these tiny fluttering birds having fun in the yard.

Currently, there are numerous methods of attracting these birds to your yard, and putting hummingbird nectar in feeders will forever reign as the most effective of all. Our readers regularly send us lots of questions related to feeding these beautiful birds, so it’s the same this time: can hummingbirds have honey? Stay tuned to find out if this ingredient is just as beneficial for hummingbirds as it is for humans.

We assume that you have all heard of honey, the amazing liquid produced by bees. In short, bees or other related insects use flower nectar or honeydew to make honey, which they store in large waxy structures, commonly called honeycombs.

Have you noticed that not all honey is the same? Its main characteristics (thickness, color, and taste) depend on several factors, including, Who produced it? The type of plant from which the nectar was used, Climatic conditions.

Now let’s move on to the main part of this article, more specifically, the answer to the question “can hummingbirds have honey?”.

Check Out Flowers For Hummingbirds In California

Can Hummingbirds Have Honey?

While honey is one of the healthiest sweeteners humans can use, we’re not sure the same applies to birds. Namely, it is often used as a stand-in for table sugar, but it is a poor choice in any case. Why is that so? Find out below!

The Risks Of Adding Honey To Hummingbird Nectar

Apart from the fact that it ferments and molds very easily, this solution is quite sticky and can pose a great danger to the feathers of these birds. Below are some of the main risks associated with adding honey to hummingbird nectar.

It Is Not Easily Digestible

As we have already mentioned, honey is made from flower nectar, and considering that nectar is the main source of food for hummingbirds, it is no wonder that many people miscalculate 2 + 2 and reach for honey as a substitute for nectar.

Namely, the production process involves changes in the chemical composition of honey, which makes it too difficult or almost impossible to digest. If a hummingbird has digestive problems, this can minimize its energy intake, which can ultimately lead to death.

It Attracts Other (Unwanted) Visitors

It Can Endanger Their Health

We believe that most of you would not even think that some varieties of honey contain different fungi and bacteria and can seriously endanger the health of this rather delicate bird.

It Clogs The Ports – Can Hummingbirds Have Honey?

Even when diluted, honey can clog the ports of your feeder. Clogged ports aren’t good either, as they prevent hummingbirds from getting to the nectar, and both birds are known for constantly wandering around in search of a new food source. By doing so, you risk them leaving your garden and cheering up one of the neighbors instead of you.

That would be it, now you know the true answer to the question “can hummingbirds have honey?”.

Can Hummingbirds Drink Honey Water? No, hummingbirds should never consume honey; table sugar is a much better alternative if you want to make your own DIY nectar solution. This is because even when diluted with water it contains various fungi and bacteria that simply flourish in such an environment and pose a considerable danger to the health of the world’s smallest birds.

What Should You Not Feed Hummingbirds? According to experts, it is preferable to avoid putting raw sugar, molasses, and honey in hummingbird feeders. This is primarily because they can directly affect bird health or encourage the development of harmful pathogens.

What Can I Feed Hummingbirds Besides Sugar Water? A hummingbird’s diet shouldn’t be uniform but made up of different food sources. Nectar-producing flowers are the most popular option, and besides them, feel free to reach for other options like tree sap, fruit juices, pollen, and various creepy-crawly creatures.

It would be a good idea to pay attention to pesticides or insecticides that are normally used without thinking about the consequences, to help hummingbirds avoid feeding on such food sources. Finally, keep in mind that the more choices you offer them, the more attractive your yard will be to them, and the healthier they will be.

Can I Use Maple Syrup for Hummingbirds? The sap found in sugar maple trees is among the favorite delicacies of these birds. Given that maple syrup is also made from the same sap, it is no wonder that many immediately think that it is completely safe to feed hummingbirds with this syrup. However, the truth is completely the opposite, as maple syrup has different chemical compositions that hummingbirds cannot effectively digest.

To Conclude: Can Hummingbirds Have Honey?

So, can hummingbirds have honey? It would be preferable to avoid this food because it poses a great danger to the health of these unique creatures. Namely, hummingbird intestines are simply not adapted to digest honey, which can eventually lead to death. There are so many other foods that these birds will appreciate that are at the same time a much better option for their well-being.

We hope you found this article useful, and if you have any questions, feel free to let us know in the section below.

Recommended: Are Hummingbirds Afraid Of Humans? 4 Tips To Prevent Scarring The Birds Away