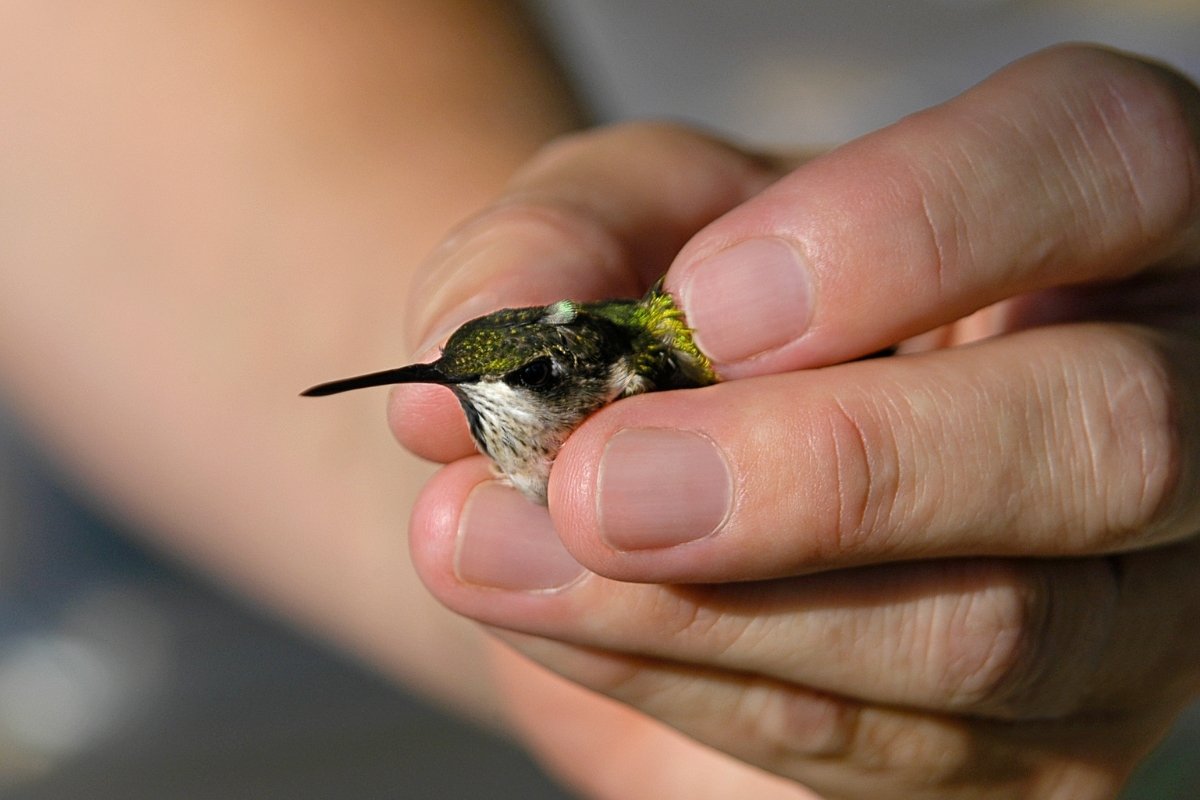 Are hummingbirds afraid of humans? While it is true that some hummingbirds may be timid around humans, others may not seem to care at all. Some even eat out of handheld feeders! So it’s an intriguing question and the answer is not always clear.

So why do some hummingbirds fear people, while others don’t? To answer this question, we’ll need to take a closer look at how hummingbirds interact with their environment and the different types of behavior they exhibit. Read along to find out more!

When most people think of hummingbirds, they picture the tiny birds hovering around flowers, sipping nectar. While it’s true that hummingbirds are attracted to sweet things, there is much more to these fascinating creatures.

Hummingbirds spend half the year in the wilderness of Central and South America. These birds are very sensitive to loud noises and voices, and will often fly away if they are startled. However, their fear of humans doesn’t prevent them from being curious creatures.

Do hummingbirds trust humans? If you are still and quiet, you may find a hummingbird coming close to investigate you. So the next time you see a hummingbird, take a moment to appreciate these incredible creatures from a distance.

Hummingbirds are known for their ability to fly quickly and for their intricate flying maneuvers. In addition, many people are fascinated by these tiny birds because of their brilliant plumage and unusual feeding behaviors. But can hummingbirds recognize humans as well? Or are hummingbirds afraid of humans?

Some scientists believe that these birds are able to recognize human faces. Studies have shown that these birds are able to memorize and recognize patterns and colors, which may help them to identify faces as well. While it is still unclear whether or not hummingbirds are actually afraid of humans, research suggests that they are certainly capable of distinguishing between different faces.

Another study found that when presented with photographs of familiar and unfamiliar people, the Ruby-throated hummingbirds selectively approached the photograph of the person they knew best. This suggests that these birds have the ability to uniquely identify human faces and possibly even remember individuals over time.

So are hummingbirds afraid of humans? If you’re looking to catch a glimpse of these feathered wonders, better keep an eye out – they might just be watching you too!

Why You Mustn’t Disturb Hummingbirds

It’s really important not to disturb hummingbirds. Not only are hummingbirds afraid of humans but they’re easily scared too.

Hummingbirds are constantly on the lookout for food sources, and they fly from flower to flower in search of nectar. If you disturb them while they’re feeding, you may cause them to drop the flower they’re feeding on, which could mean that they won’t get the food they need.

What are hummingbirds afraid of? Are hummingbirds afraid of humans only? Loud noises, predators, and suddenly being approached by humans. Hummingbirds are also very tiny, and because of their size and rapid wing beats, they can easily overheat. If you disturb them while they’re resting, you may cause them to expend energy unnecessarily, which could leave them too tired to feed or even put them at risk of overheating and dying.

Are Hummingbirds Afraid Of Humans During Breeding

No, hummingbirds are not particularly afraid of humans during breeding. However, they may be more cautious around people during this time if nesting near human activity. If you approach a hummingbird nest, the bird may fly away but it will quickly return once it realizes you pose no threat. These tiny creatures have a lot of courage and loyalty to their young.

Things are different if you approach a fallen bird or egg. The mother might not accept it after you’ve touched it and let it die. If you find a fallen baby bird or egg it’s best to leave it alone. There’s a great possibility that the mother will take it back.

How To Safely Approach Hummingbirds

Hummingbirds are beautiful and fascinating creatures, and it’s definitely worth taking the time to get to know them better. The reason why are hummingbirds afraid of humans is the unsuitable approach.

Here are a few tips for safely approaching hummingbirds:

Are hummingbirds afraid of humans? It turns out the answer is yes, but you can get close if you approach them quietly. Don’t touch a hummingbird – they may mistake your hand for a predator and fly away. And stay away from hummingbird nests and babies!

If you want to observe hummingbirds, it’s best to do so when they are feeding at a feeder or resting. Use your binoculars or zoom in on your camera for some photos.

Thanks for following our tips on how to safely enjoy these beautiful creatures!

Hummingbirds are very intelligent birds and they can certainly recognize individual humans. In fact, they are known to be very curious birds and will often approach humans who are new to their environment. If you have ever been in close proximity to a hummingbird, you may have noticed that they seem to be constantly checking you out!

There's no definitive answer to this question since it would depend on the individual hummingbird's personality and past experiences. However, in general, hummingbirds are known to be trusting of humans and will often approach people looking for food. This is probably because hummingbirds are used to being around people who are feeding them sugar water or other types of food.

What are hummingbirds afraid of?

Some of the things that could potentially scare a hummingbird include predation like owls and snakes, larger birds or animals, bad weather conditions such as wind and heavy rains, and humans approaching them too closely.