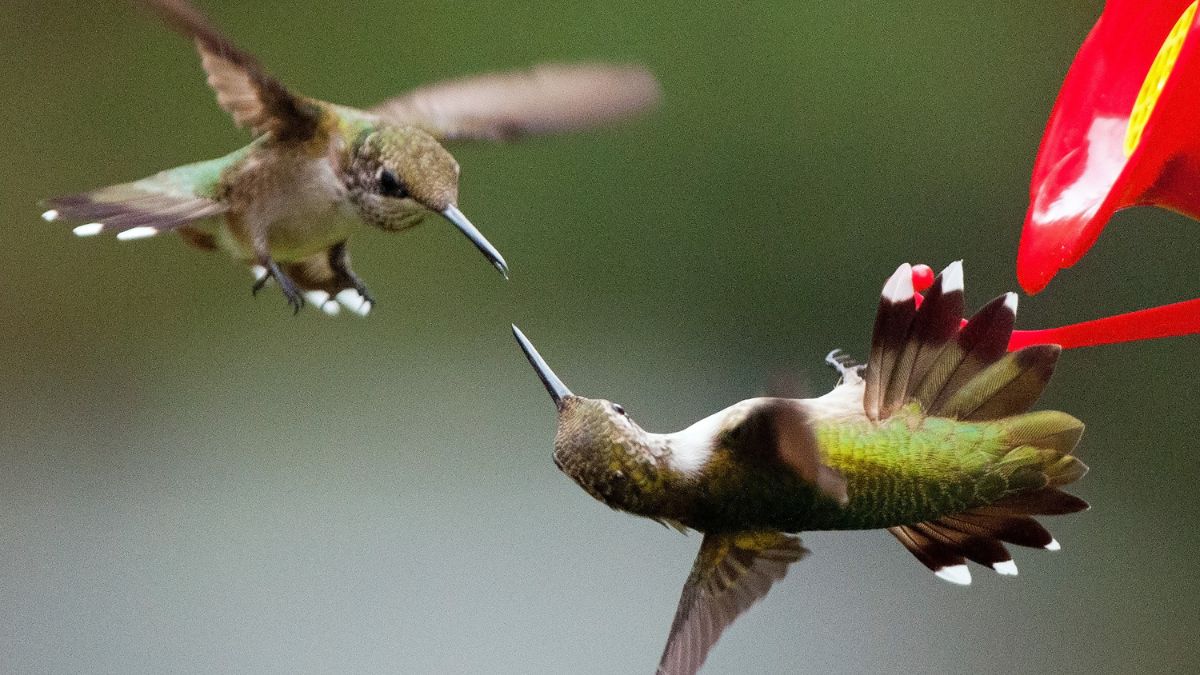 Last Updated on October 5, 2022 by Guillermina

Can hummingbirds kill each other? Check out this article to find out if this can really happen.

Although small and cute birds such as hummingbirds can sometimes become aggressive.

Many birds show aggression when they feel that intruders have violated their breeding territories or feeding grounds. Aggressive behavior is usually strongest in late spring or early summer when birds are searching for territory and defending nests. Among North American hummingbirds, the ruby-throated hummingbird has one of the worst tempers, but all species of hummingbirds can display anger and aggression to varying degrees. Male hummingbirds are often more aggressive at feeders, while female hummingbirds attack near their nests.

Another reason hummingbirds fight is when food is scarce. They cannot afford to share flowers and nectar with others. They have a long way to go when migrating, so they get aggressive as they defend prime feeding grounds in preparation for migration.

We know that they are indescribably belligerent, but can hummingbirds kill each other? Find out below!

Can Hummingbirds Kill Each Other?

Hummingbirds, regardless of how small and adorable, aren’t that friendly birds. They are very territorial and guard their food sources, as they need plenty of food at all times due to their high metabolism.

Furthermore, hummingbirds don’t fly together. Flocks can be found at hummingbirds’ feeding grounds but not when they are migrating. The behavior of hummer is clearly territorial towards other hummingbirds and even people. 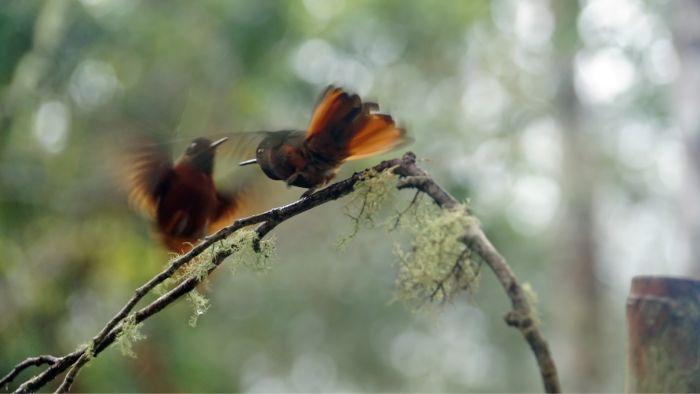 Male hummingbirds choose their territories based on the availability of food, water, and nectar. Females, by contrast, claim territory in the nests to build. Once territorial established, they are fiercely protected by both males and females.

Male hummingbirds tend to be more aggressive than female hummingbirds. They can share their territory with females but will ward off once male intruders.

They guard their food sources like gladiators. But can hummingbirds kill each other? Let’s find out!

Although they are often aggressive, it is quite rare for hummingbirds to fight to the death. However, it can happen if the bird is seriously injured in a fight. For example, two male hummingbirds can kill each other if they are highly aggressive. Most hummingbirds do not intentionally try to kill each other. They are simply trying to protect their nests and resources, or let other hummingbirds in the area know who the boss is.

Do Hummingbirds Try To Hurt Each Other?

Hummingbirds may be small, but they have a huge array of weapons and threats at their disposal to discourage unwelcome visitors. When a hummingbird feels threatened, it can show aggression in a variety of ways.

They fight each other to protect their own food supply and that of their offspring. A sparring match between men and hummingbirds usually does not end in injury. There are several species of hummingbirds that compete with others for dominance.

Some hummingbird species have a reputation for being more aggressive than others. The Rufous Hummingbird, in particular, is well recognized for its temperament. Males are usually stronger than females in territorial behavior at feeding grounds.

Will Hummingbirds Fight To The Death?

Now that you know the answer to the question “can hummingbirds kill each other”, let’s go into a little more detail, shall we?

Although fighting is common among these small creatures, fighting to the death is not that common. It only happens if the hummingbirds are extremely aggressive. Hummingbirds fight for many reasons. They may fight over food sources or territory to establish dominance or as part of courtship or mating rituals.

They have many ways of showing their aggression, such as aggressive noises. A hummer usually starts by making loud warning noises that alert others that the territory has been taken.

They use body language- by changing posture to make themselves look bigger and more dangerous to others. Chasing is one of the most common signs of attack; dominant hummingbirds chase other hummingbirds away from feeding and nesting grounds. Birds that are hunting will sometimes chirp loudly as they chase their intended target at great distances from where they are sheltering.

Furthermore, common feeder behavior is diving. The aggressive hummer will hover over the intruder and dive straight forward, whether it is another hummingbird or not. Diving is also combined with loud chirps to warn unwelcome visitors.

Hummingbirds are sometimes mean to each other, especially for reasons such as territory and food. They have excellent eyesight and will stay alert for long periods of time near bird feeders and flower garden areas. 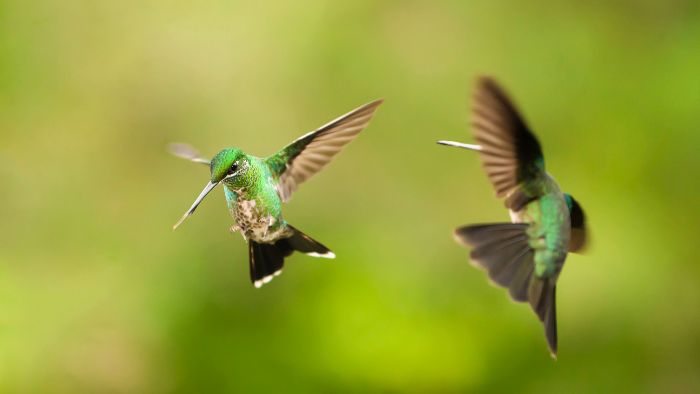 If an intruder is sighted, the bird can swoop in seconds with wings built for this rapid flight. Hummingbirds warn of intruders and other hummers that they may pose threat to their feeding grounds before pursuing them. One of the first warnings is their territorial sound, a high-pitched, rapid chirp, or chatter.

Do Hummingbirds Stab Each Other?

Hummingbirds’ long, sharp beaks serve a different purpose than searching for nectar. They sting each other’s throats with their beaks during territorial disputes. Male-to-male fights are part of a mating ritual called ‘lekking’, which occurs in order to have more space for mating with females. When fighting with others, they point the beak like a dagger.

They also observed that male birds used their beaks to pierce each other’s throats during fights and that males with longer, pointed beaks were more likely to win these fights and therefore defend the best territories.

Abstract: Can Hummingbirds Kill Each Other? 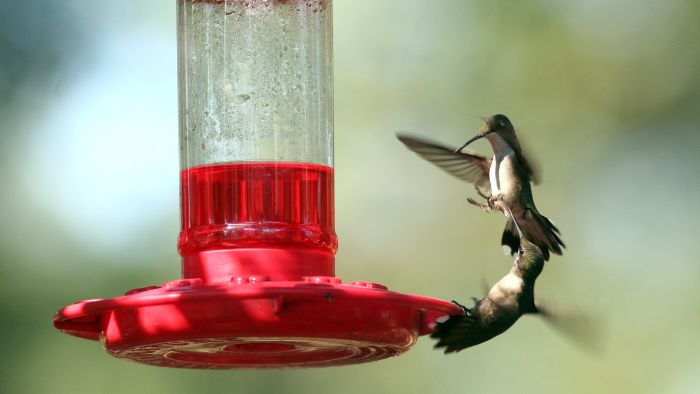 Hummingbirds are one of the most territorial birds. They are known to claim entire flowerbeds as their own and may even claim three or more feeders, flying around over and over again to chase away any other intruder who dares to enter their territory. They have been known to guard an area up to a quarter acre in size. This is a natural feature of hummingbirds.

They are undeniably fascinating birds. But there’s no denying that their small size makes life difficult in this big world. They had to fight to survive. Even if that means not sharing their food and fighting others.

Have questions? Let us know in the section below.