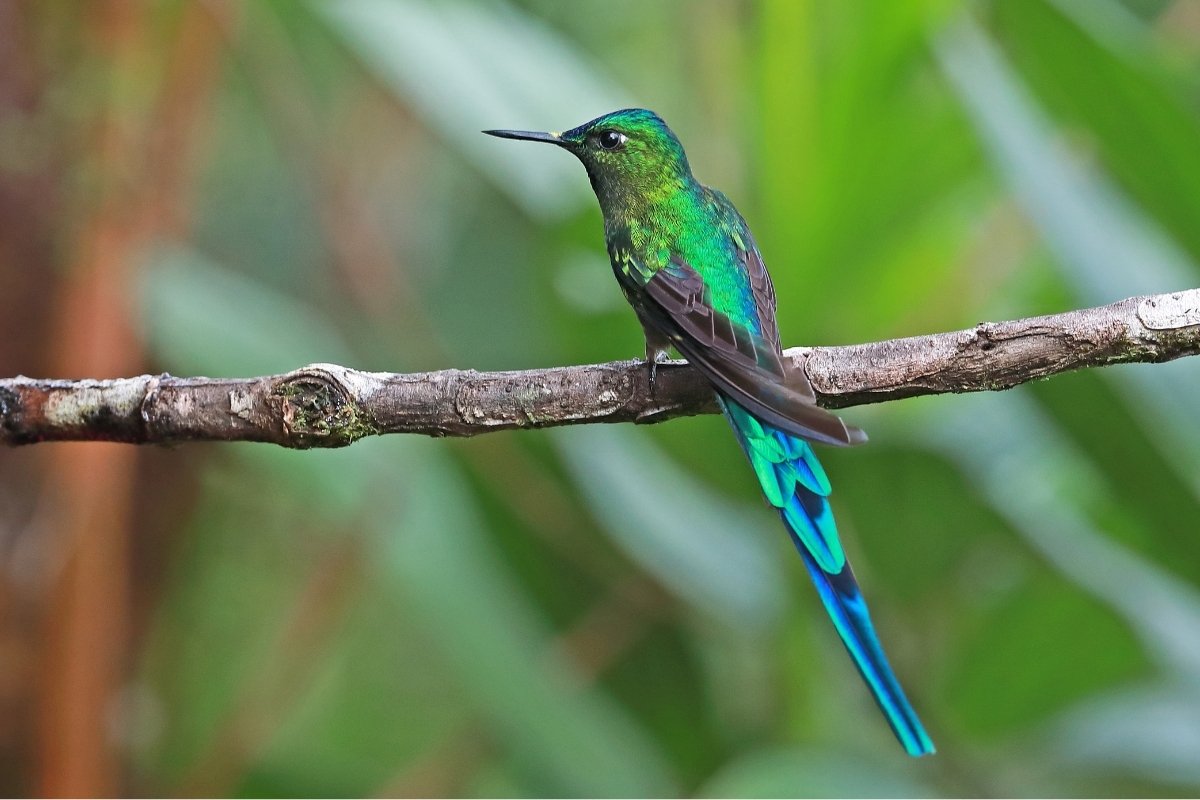 Hummingbirds with long tails are mesmerizing but have you wondered what the use of their tails is? It’s hard to spot a long-tailed hummingbird in North America, and the photos of these birds make them look like mystical animals.

The main purpose of a bird’s tail is to aid in flying when the bird needs to change directions, turn, or go up or down. Does a long tail make these hummingbirds better flyers? No, they’re actually slower due to the greater size!

However, they do perform some maneuvers better than your average hummingbird. Additionally, the specific colors hold another meaning for the hummingbirds with long tails. Read along to find out!

How Hummingbirds Use Their Tail

When the hummingbirds with long tails want to turn left, they flick their tail to the right. This creates a torque that turns the body to the left. It may seem like a small movement, but it’s enough to make a big difference when you’re zipping around at high speeds! So next time you see a hummingbird, take a closer look at its tail. That’s how it gets around!

In general, hummingbirds with long tails tend to be found in open habitats such as fields and savannas, while those with shorter tails are more common in forested and urban areas. This likely reflects the different demands of these habitats, with long tails providing an advantage in open areas but being more of a liability in dense vegetation.

The Long-tailed Sylph is a hummingbird with a very long tail and body length of only 3-4 inches. Where do long-tailed hummingbirds live? This one is found in the mountains of Central and South America. The male Long-tailed Sylph has a green body with a white breast, and its throat and belly are gold. The female is similar in appearance, but she has a brownish-green body.

The Booted Racket-tail is a hummingbird found in parts of South America. It gets its name from the long, racket-shaped tail feathers that extend from its rear end. These tail feathers can be up to twice the length of the bird’s body!

The Booted Racket-tail is also notable for its iridescent plumage, which can range in color from green to purple. Male hummingbirds are usually more brightly colored than females, but both sexes have distinctive white markings on their throats.

Booted Racket-tails are relatively small among the hummingbirds with long tails, measuring only about 4 inches long from beak to tail. Although their populations have declined in recent years due to habitat loss, the booted racket-tails are not considered endangered at this time.

If you’re looking for hummingbirds with long tails, you’ll want to check out the Violet-tailed Sylph. These hummingbirds are found in Central and South America, and they’re known for their beautiful long tails.

The males have particularly long tails, which they use to attract mates. The Violet-tailed Sylphis a relatively small hummingbird, measuring only about 4 inches long. These hummingbirds are mostly green in color, with a white belly and some red on their throats.

In addition to serving as an important source of food for hummingbirds, the nectar from these flowers also provides a valuable energy source for other animals such as bats, insects, and even lizards. The Long-tailed Woodnymph keeps a balance in the food chain in the remote areas of Central and South America.

The Glowing Puffleg is another one of the hummingbirds with long tails living in the Andes Mountains of South America. The males of this species are known for their distinctive plumage, which features a black body with iridescent blue and green feathers.

They have long, fluffy tail feathers that they use to attract females. The females are less brightly colored, but they share the same long tail feathers. Both sexes have tiny, black feet and bill.

The Sapphire-vented Puffleg is a hummingbird found in the northern Andes Mountains of South America. It is a small bird, with males reaching a length of only 3.1 inches. It’s most notable for its long tail, which can be up to twice the length of its body. If you wondered, do female hummingbirds have long tails, they have shorter tails, but still noticeably longer than those of other hummingbird species.

Check Out How To Clean Hummingbird Feeders With Hydrogen Peroxide: 5 Easy Steps

While all hummingbirds have tails, some species sport tails that are nearly as long as their bodies. These hummingbirds with long tails are particularly adept at maneuvering through dense forests, using their tails as rudders to navigate tight spaces. In addition to helping them fly with greater precision, the long tails of these hummingbirds also serve as a visual cue for potential mates.

So next time you see a hummingbird with a lengthy tail, take a moment to appreciate both its beauty and its utility!

Do female hummingbirds have long tails?

Females do have long tails, but not as long as the males. The hummingbird's tail is used for balance and also for displaying to other hummingbirds. In general, the more colorful a hummingbird is, the more desirable it is to potential mates.

Where do long-tailed hummingbirds live?

Why do hummingbirds have tails?

There are many theories as to why hummingbirds have tails, but the most likely reason is that they use their tails for balance while hovering in midair. Their tail feathers are also very flexible and help them maneuver easily.

Do hummingbirds have tail feathers?