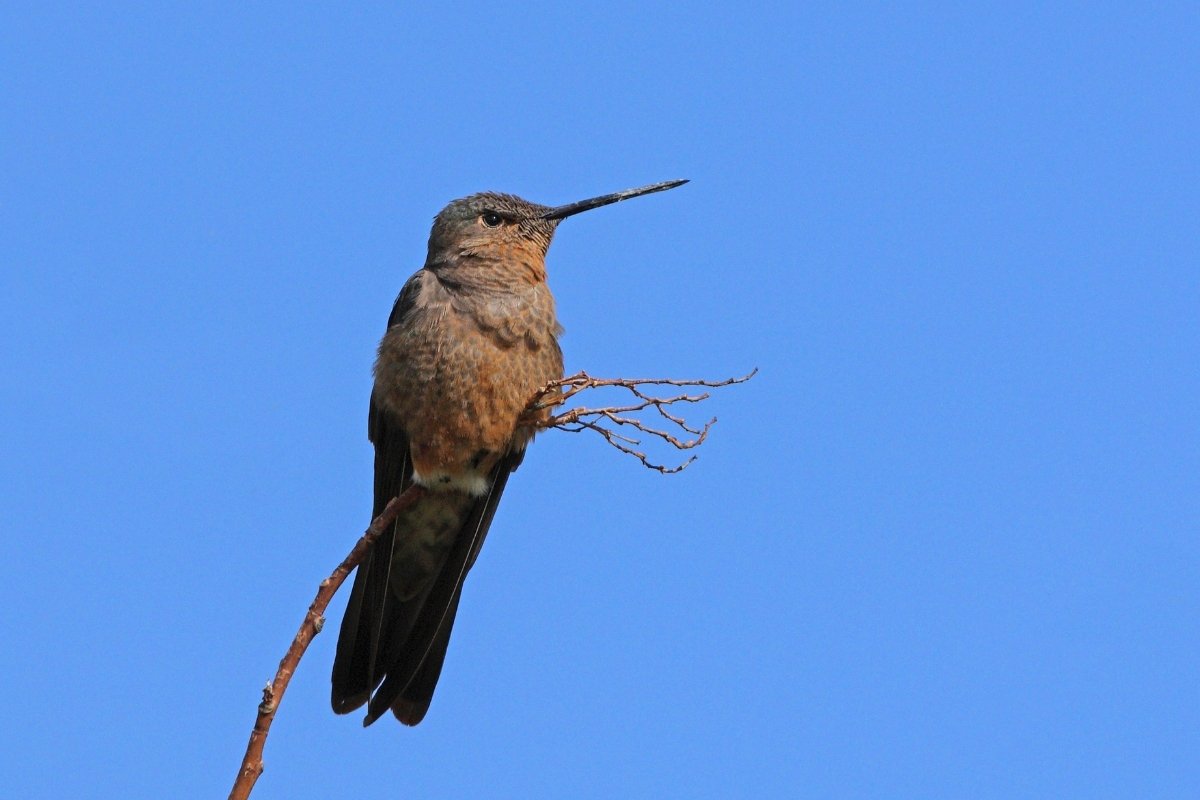 Are you aware of the giant hummingbird size? Although ten times bigger than the tiniest hummingbird, this tropical bird is not that much different. It follows the same diet as your backyard hummingbirds and lives in forest areas.

Unfortunately, it’s not native nor visiting North America, so your only chance to spot one is through exploring some areas of South America. Read along if you’re curious about what this bird looks like and how it evolved.

Although the giant hummingbird size suggests it would be heavier, this bird has a slim body covered in thicker plumage. The female’s body is gray with a lighter chest, typical dull colors. The male has a golden-colored chest and neck with green wings and back. Their beaks are long but slender.

If you ever wondered what is the largest hummingbird ever recorded, it’s the patagona gigas and its 2 subspecies.

Natural Habitat of the Giant Hummingbird

So, where does the biggest hummingbird live? You can find patagona gigas in Ecuador, Bolivia, Chile, Argentina, and other western South American states. They prefer to habituate in the Andes and live at a higher altitude, especially during the summer. Some species were found at 15,000 feet above sea level. During winter, as temperatures go down, the birds come to a lower altitude.

The giant hummingbird failed in reciprocating in such a large number to inhabit North America. But it’s still a very persistent bird. It can be harder to spot in urban areas since it looks for forests and dense vegetation.

What Does The Giant Hummingbird Eat?

Keeping in mind the giant hummingbird size you’re probably wondering what does this bird eat? Their diet is not much different than your backyard hummingbirds. The giant hummingbird also loves nectar, but it relies on flowers since it lives in more remote locations without human-provided feeders.

The Hummingbird Book: The Complete Guide to Attracting, Identifying, and Enjoying Hummingbirds

But the size doesn’t come with many benefits for the giant hummingbird. It often struggles to find enough food, which can be the leading cause for this bird to become extinct with time. With the destruction of the bird’s natural habitat, there’s less space for their food to grow.

Moreover, when the giant hummingbird visits a flower searching for its nectar, it might puncture it, and the flower will die.

The mother looks for a secluded tree near a water body like a lake or spring. She lays 2 eggs per season. She is the only one laying the eggs and raising the young. The mating occurs during the summer months when the temperatures are high. The male might mate with several females in a season.

Quick Facts About the Giant Hummingbird

The giant hummingbird glides instead of constantly flapping its wings which is not typical for hummingbirds.

The giant hummingbird size requires a lot of food which makes them very defensive when it comes to food sources. They’re known to fight other hummingbirds or larger birds to defend their nectar source.

Some aboriginal tribes residing in the Andes mountains believed that the giant hummingbird grants fertility to the woman who can capture it. As a result, the bird held great importance in their folk tales and even inspired some geoglyphs.

The giant hummingbird size is not terrifying, but it’s 10 times greater than the smallest hummingbird. These birds aren’t heavy, they’re less than 1 ounce, but they’re much larger with 8.5 inches wingspan. They have a similar lifestyle to regular hummingbirds but tend to fly slower and live in more remote areas.

What is the largest hummingbird ever recorded?

The giant hummingbird or Patagona Gigas is the largest one ever recorded, with a maximum weight of 0.85 ounces and a maximum length of 9.1 inches.

Where does the biggest hummingbird live?

The giant hummingbird is native to South America and can be found in the east and western parts of the continent. It's more common in Peru, Bolivia, Ecuador, and Argentina.

What is the largest hummingbird in North America?

The Ruby-throated hummingbird is the largest in North America. It weighs 0.10 ounces and is 7.5 inches long.