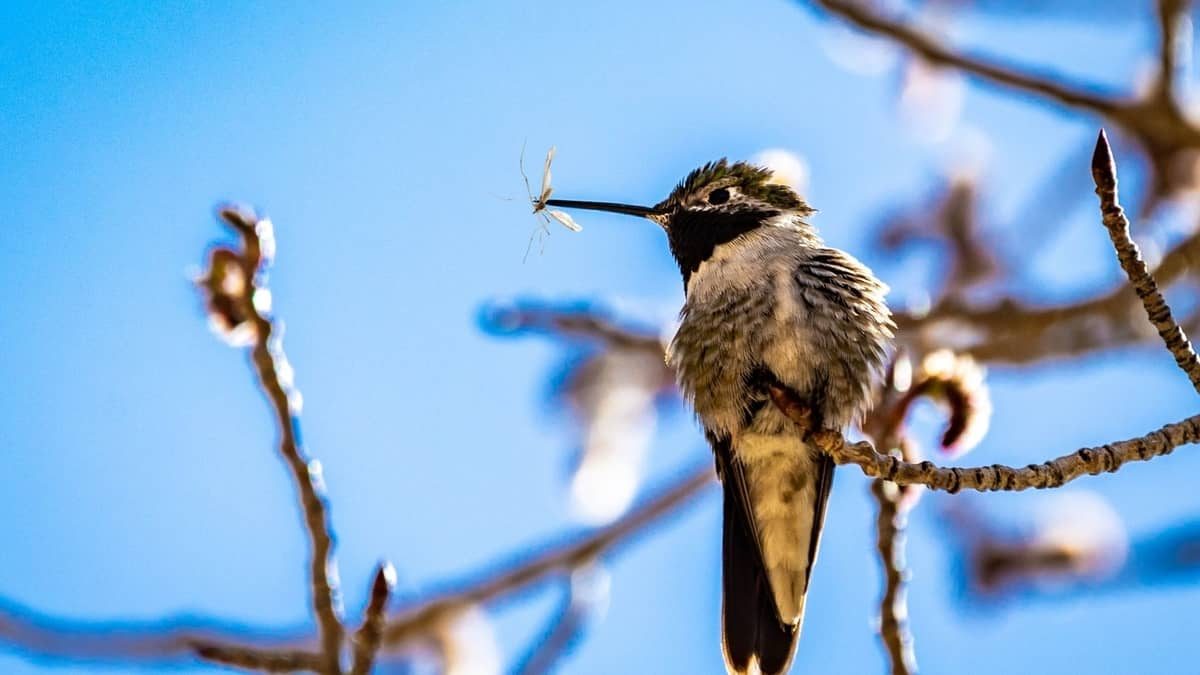 Many times, emphases have always been made on nectar when it comes to feeding hummingbirds. But did you know hummingbirds also eat bugs? Do you ever wonder if hummingbirds eat insects such as wasps, bees, ants, and so on?  Let’s take a look at what insects hummingbirds do eat and how it affects their diet.

It’s true hummingbirds love nectar solutions but nectar alone isn’t enough to provide an optimal diet for their vigorous daily activities. Therefore they will feed on small insects such as aphids, spiders, ants, beetles, flies, and so on.

Let’s dive in further and gain some more knowledge on what insects hummingbirds eat and many more.

Just like every other bird, hummingbirds require extra nutrients, vitamins, protein, minerals, fat, fibers, and so on, in their diet to stay healthy and strong. Now, all these nutrient requirements can’t be met by just feeding on nectar solutions. Hence, these small insects can provide hummingbirds the required nutrients.

Looking at these tiny birds, you may simply think their diet requirement should be small. But don’t be deceived. Hummingbirds have a very big appetite. They are capable of consuming half of their body weight in a day.

This is because these birds are so vigorous in their activities. Activities such as the rapid flapping of wings 10 to 15 times per second, fast heart rate, flying or traveling long distances, and so on. All these activities require and consume a lot of energy. So, these birds will need an optimal diet to meet up with their vigorous daily tasks. 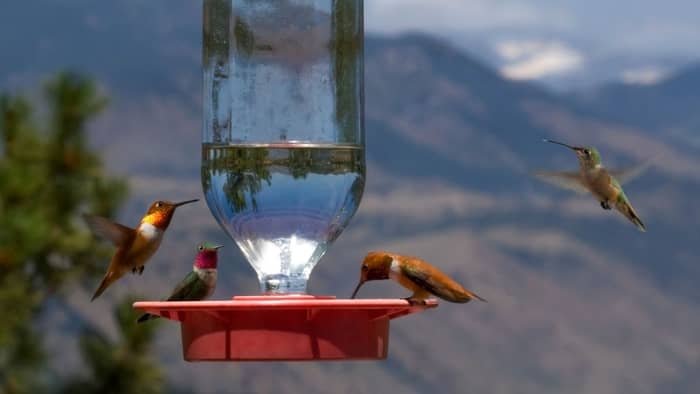 As we said, hummingbirds don’t just feed on nectar solutions. Bugs and insects are also part of their diet. A hummingbird can feed on bugs such as beetles, gnats, aphids, spiders, flies, mites, etc.

Hummingbirds are capable of consuming around a couple of dozen insects to hundreds or even thousands of insects in a day. Matter of fact, about 80% of their diet consists of insects.

These birds will choose small insects that they can easily capture and swallow at a go without the need for dismantling their body parts. Apart from fully formed insects, hummingbirds can as well feed on the eggs and larvae of these insects.

Mosquitoes are definitely part of hummingbird’s diet and these birds can eat plenty of them in a day. Because of their incredibly small size, it is pretty easy for hummingbirds to capture these mosquitoes even from spider webs, standing water, and air.

Hummingbirds will simply hover or fly around these mosquitoes for a while and launch their attack on them.

Even though insects are part of the hummingbird’s diet, there are other insects hummingbirds don’t eat. They include:

Hummingbirds don’t eat ants. So if by any chance you see ants on your feeders, don’t think that’s extra food for them. Matter of fact, having too many ants on feeders can be bad for these hummers. They simply won’t find the feeders attractive or a reliable food source if they’ve been infested with too many ants.

However, hummingbirds may end up feeding on a few ant species such as army ants, turtle ants, guest ants, cork-headed ants, and leaf-cutter ants.

Bees don’t make part of hummingbird’s meal. Usually, bee’s aggressive behavior discourages hummingbirds to feed on them. Hummingbirds usually end up fighting these aggressive bees whenever they come across them in food sources such as flowers and feeders.

However, if the bees are too much, hummingbirds usually stay away from them. So, if your feeder is infested with too many bees, hummingbirds may abandon the feeder. 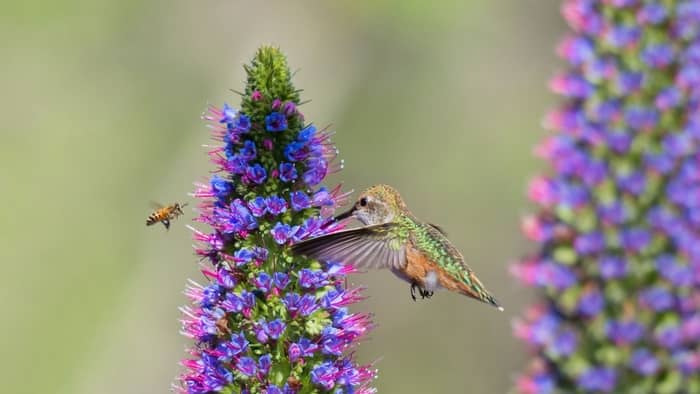 Ladybug isn’t part of hummingbird’s meal. Ladybugs serve as pollinators and are attracted to similar flowers that have bright colors and produce nectar.

Hummingbirds tend to feed in harmony with these types of insects. They both serve as beneficial pollinators for flowers.

Hummingbirds won’t feed on wasps. Wasps are also aggressive insects that hummingbirds often end up fighting if they encounter them around their food source.

However, hummingbirds may end up feeding on some wasps species such as spider wasps, sand wasps, black wasps, and paper wasps.

What Preys On Hummingbirds

For all wildlife, there are hazards that include harsh weather conditions, predators, and so on and this requires survival. For these tiny lustrous birds, predators are their major hazards as they are more prone to being preyed upon.

They can also fall prey to other birds such as Hawks, Merlins, Loggerhead Shrikes, and American Kestrels. Snakes, lizards, and even frogs have also been known to prey on these hummers as they can easily snatch any low flying hummers. Other hummingbird predators include squirrels, chipmunks, crows, blue jays, and so on.

Another surprising hummingbird predators are the jumbo dragonflies such as dragon hunters. Smaller hummingbirds tend to be a victim to these flies.

For a long time, people didn’t believe this could be possible. But the belief changed when birder Joseph Kennedy took a picture of a common green darner feeding on a Ruby-throated hummingbird.

Most of our belief is that hummingbirds are attracted to sweet nectar solutions. This isn’t totally wrong. However, nectar can’t just sustain these lustrous and vigorous birds.

With their extremely fast flying abilities and other tasking activities, they will require plenty of food for energy. Hence, they have a large appetite. So, apart from nectar, hummingbirds will also feed on small insects.

So, we hope you’ve been enlightened on what insects hummingbirds eat.

Read more about When Do Hummingbirds Leave North Carolina?