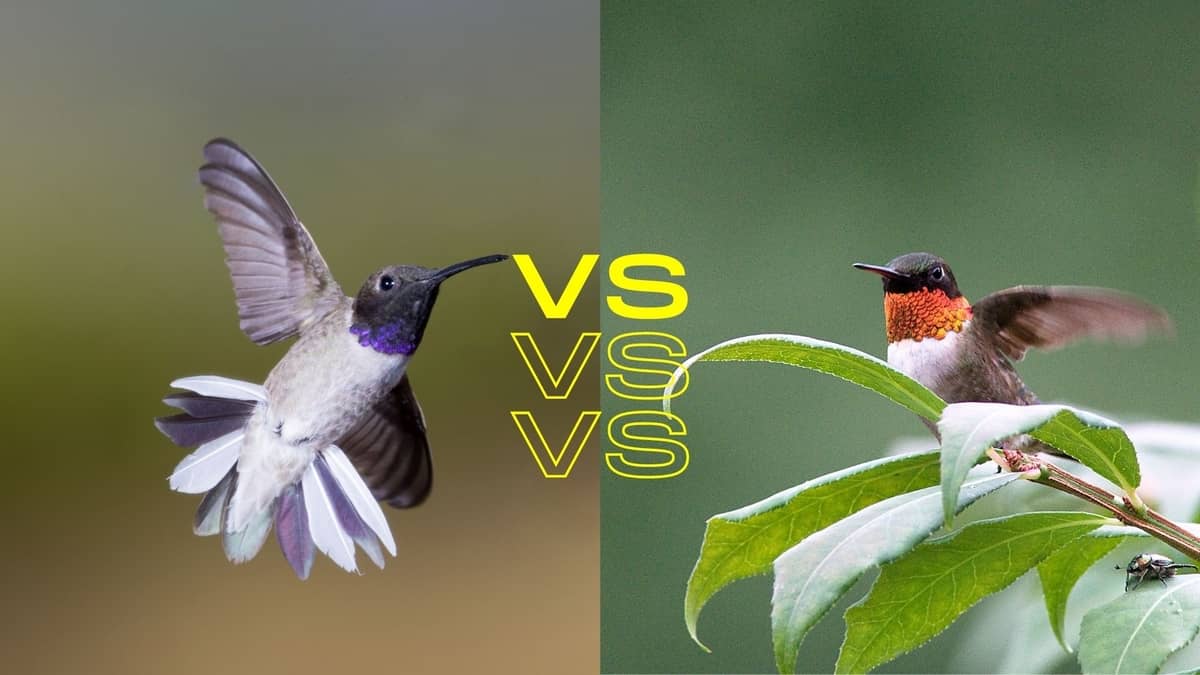 Last Updated on December 30, 2021 by Guillermina

Some hummingbird species may look similar to each other and you may be wondering how to tell the differences. Today, we would be looking into Black-chinned hummingbird vs Ruby-throated hummingbird.

So many hummingbird enthusiasts love to have hummingbirds around their yards and gardens. Different regions in the United States are blessed with the presence and activities of these sweet lustrous birds.

These captivating birds tend to migrate into various parts of the US to nest and commence breeding. Then once winter is around the corner, they migrate or depart to their wintering ground which is usually Central America and Mexico.

But with so many species of hummingbirds flying around your garden, can you tell one species from the other? The Black-chinned hummingbird and Ruby-throated hummers are species that some people tend to confuse each other with. 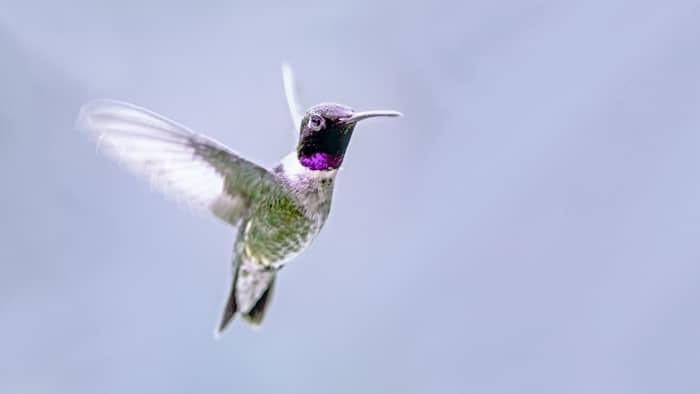 Some people may confuse identifying a Black-chinned hummingbird vs the Ruby-throated hummingbird because they tend to look similar. But take note not to confuse these two different hummingbird species.

Description Of The Black-Chinned Hummingbird

One species that occupy the habitats of North America is the Black-chinned hummingbirds. They are small birds of the hummingbird’s species weighing around 3 grams. They also are around 8.25 cm or 3.25 inches long.

The adults of the Black-chinned hummingbirds appear metallic green from the top. Then they appear white from below with green flanks. They have this long, straight, and very slender bill.

The adult male black-chinned hummers are characterized by velvety black throat plus a thin, iridescent purple base. They also have their tail to be dark forked.

The female on the other hand has their throat as pale. Their tail is round with white tips and no sign of a throat patch.

The two genders have their flanks glossed with dull metallic green. 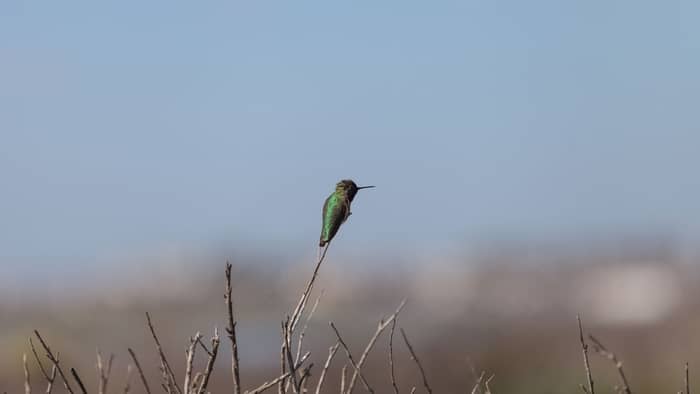 The Behavior of the Black Hummingbird

Just like every other hummingbird species, Black-chinned hummers are diurnal birds meaning they are mostly active during the day. Their activities during the day are full of sipping nectar from various sources as well as feeding on small insects.

These hummingbird species also tend to be solitary. They are one common widespread western summer hummingbird species. They can also become territorial especially around feeders and other feeding sources. Their defensive behavior also tends to increase during breeding seasons.

During their courtship display, the Black-chinned hummers can dive up to 40 to 60 feet. They can as well dive this high during the territorial defense.

Sighted or found in the mountains of the Western United States. They are particularly found in lower elevations from desert to mountain forest.

Black-chinned hummers can as well be found in natural habitats and highly urbanized spots so far there are enough flowering shrubs, tall trees, and vines. A lot of the Black-chinned hummingbirds also winter along the Gulf Coast.

You may find their nest 6 to 12 feet above the ground usually where there is an exposed branch below canopies. Their nest is built in a well-camouflaged nest where there is protection in a shrub or tree using plant fiber, lichens, and spider webs.

Description Of The Ruby-Throated Hummingbird

Ruby-throated is one of the most common species sighted across different regions in the United States. They are also small birds that can range between three and five inches long. Their weight can be around 3.1 grams.

Their back and crown appearance looks bright emerald or golden-green. They have their underparts to be gray-white.

Characterized by a brilliant iridescent red throat are the male Ruby-throated hummers. This red throat may appear dark when there isn’t so much good lightning.  This red throat is where their common name is derived from.

However, the female Ruby-throated doesn’t have a red throat like the male. The female has their tail to be more round compared to the male.

Ruby-throated hummingbirds are one aggressive and territorial species. They are pretty territorial especially when they locate reliable food sources. They also tend to show territorialism during courtship or breeding.

During dive display, they can rise or dive up to 8 to 10 feet high just to woo the female hummers. The Ruby-throated male hummers also show off his red throat feathers while he performs his diving skills during courtship. 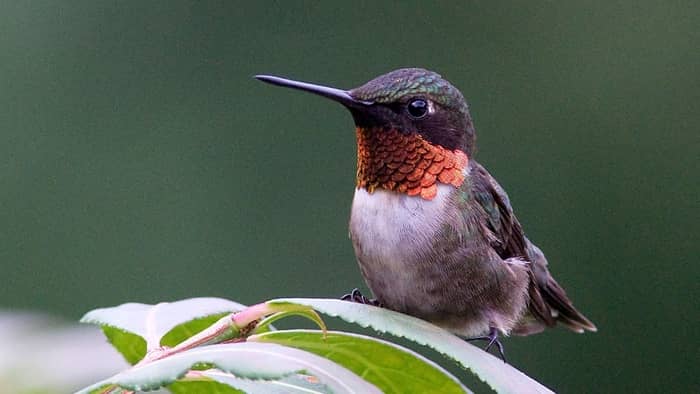 Ruby-throated hummers tend to travel far to spend their winter periods around Mexico, Central America, and Florida. Then once its spring or summer is close, they travel back to our side to nest and to breed their grounds.

They are one hummingbird species commonly sighted around east of the Mississippi River in North America.

Furthermore, the habitat of most Ruby-throated is around the woodland areas, forest edges, grasslands, meadows, and grasslands. However, you can also see them as they frequently visit gardens where there is an abundance of flowering plants.

They love to build their nest 10 to 40 feet above the ground. Their nest spot can be located on a downward sloping tree branch often in a deciduous tree. 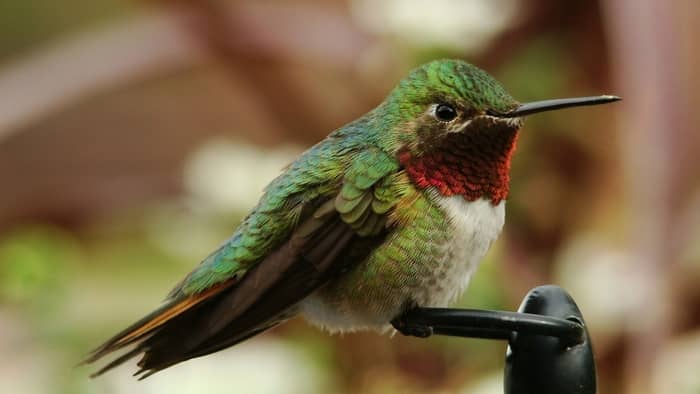