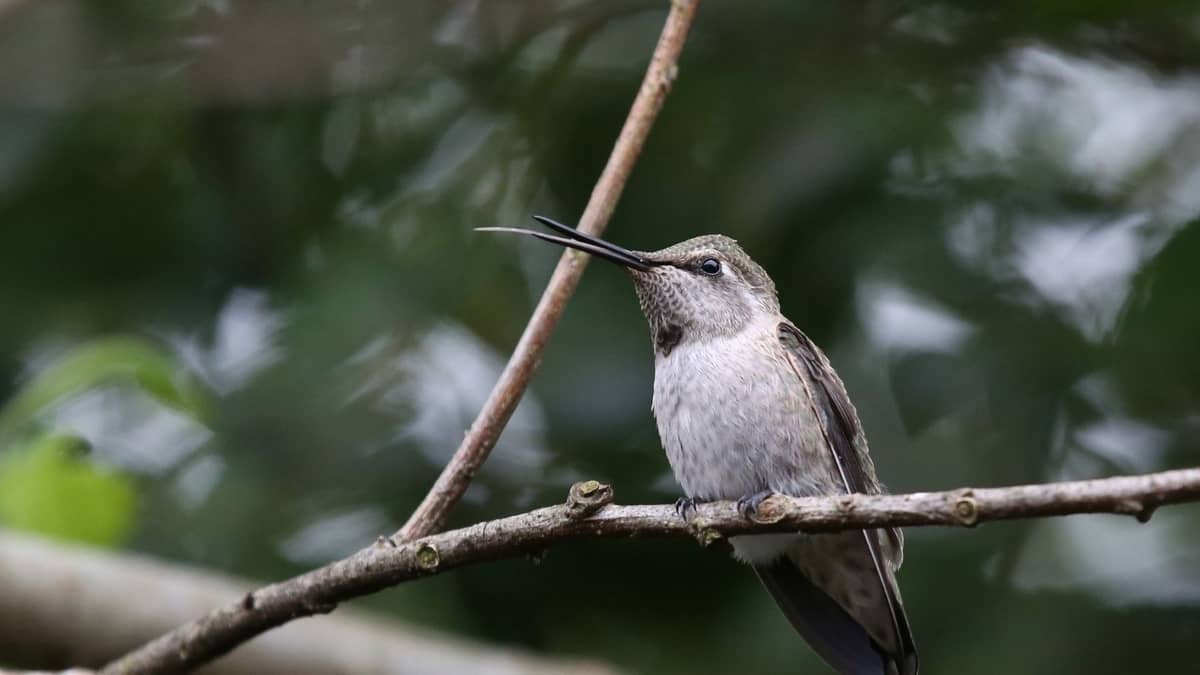 When it comes to the hummingbirds of Washington state, you can expect to spot 4 species, most of them in peak season, but some even overwinter in the area. Rufous, Calliope, the Black-chinned, and Anna’s hummingbird are the regular guests of this area. Some tend to linger around the east, while the others spend the season on the west part of the state.

If you’re wondering when to take out your feeders to welcome the little hummers, read along.

The diverse landform of Washington allows for several hummingbirds to explore, find shelter and food here during the season. Three species are migratory, meaning they arrive at the end of winter and early spring. You can commonly spot them from April to September.

As soon as hummingbirds come to Washington state, they seek a partner to mate. After the eggs hatch, you’ll notice an increased number of hummingbirds around your flowers and feeders. This is the period they’re storing fat for the trip that’s about to come.

The hummingbirds of Washington are nomadic, except for one that resides in the area year-round. The others leave to spend the winter in Mexico.

Do Hummingbirds Stay The Winter In Washington? 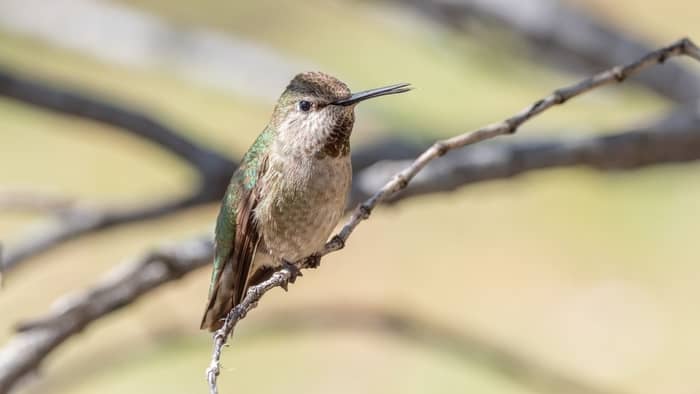 Anna’s hummingbird is a native and resident of Washington state that spends all of its life here. They never migrate out of state but change territories to find new food sources. They might stay year-round in areas where they can rely on constant food supplies like flowers and frequently filled feeders.

Anna’s hummingbirds don’t cross the state in search of food. Instead, they change scenery, explore more elevated places, and switch from meadows to forests.

They’re most common in Puget Trough and very rare to spot along the Pacific Northwest Coast.

It’s essential to know that the hummingbirds arrive in Washington in time for their matting season. So they will look for shrubs and bushy trees to build their nest. Once you notice a hummingbird frequently visiting a shrub near your house, they’ve probably laid their eggs there.

We advise you to stay away and not disturb them even after the young have hatched. Midseason, July to August, you’ll notice more hummingbirds at your feeder and humming around your flowers.

When Do Hummingbirds Come To Washington?

Hummingbirds start arriving at the end of February and the beginning of March. It’s best to take out your feeders around this time to attract the recently docked birds. 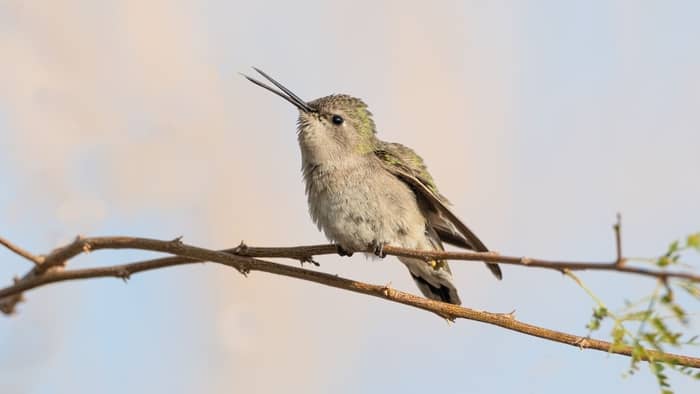 When Do Hummingbirds Leave Washington?

The species that leave Washington tend to leave by the end of September. Hummingbirds migrate solo, and males are usually the first to leave. Some of them leave as early as July, right after the breeding period.

The hummingbirds of Washington state spend the winter in the southern areas of Central America like Mexico.

Hummingbirds In Washington – Identification And Where To Find Them

The four species of hummingbirds are suitably scattered around Washington. Anna’s and Rufous hummingbird reside in Western Washington, while Calliope and Black-chinned hummingbird choose the eastern territory.

Anna’s hummingbird is a native of the region. They have a short straight bill, green and bronze body with a gray bellow. The males have a specific red head and neck, while the females have a green head and a small red section on their necks.

In recent years Anna’s hummingbirds have noticed an incline in population. Due to climate changes and numerous food sources provided by humans, from feeders to flowers, they’re populating new northern areas. 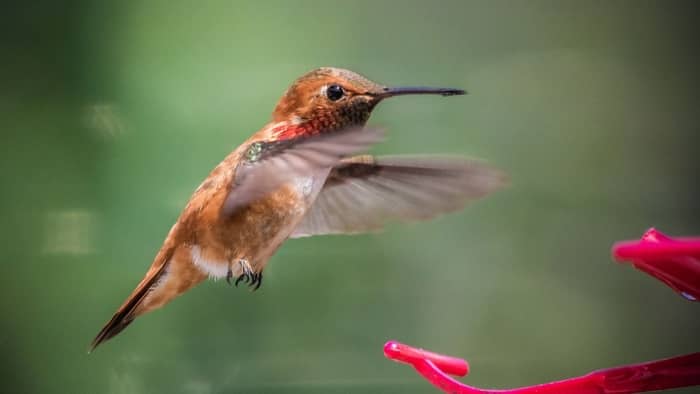 As the name tells you, Rufous are rufous all over, except for their black bill, greenish wings, and white chest. Females have a distinguishing small red dot on their necks.

In spring, you can find them in the northeast parts of the state, around the Cascades, and in the Ponderosa pine zone. They circle and breed in residential areas too.

Calliope hummingbirds are the smallest species in the area at 3 1/4 inches long. They’re green with a square-shaped tail and gray chest. Males have a purple band around their neck that they can erect.

They stay in the dry woods and meadows, with most of them hanging around the Ponderosa pine zone.

The black-chinned hummingbird is the least common one in Washington state. They’re smaller and leaner than other hummingbirds in the area. Their body is green with a white chest; males have black neck with a purple band.

You can spot them along with the river bands, in the Blue Mountains region, and rarely around the eastern Cascades.

Once in a while, other hummingbirds make a special appearance in Washington. Costa’s Hummingbird (Calypte costae) resembles the native Anna’s but it’s an infrequent wanderer.

The broad-tailed hummingbird (Selasphorus platycercu) can be spotted around Oregon.

The Xantus’s Hummingbirds (Basilinna xantusii) are Mexican natives that migrate to California and rarely detour up north.

How To Attract Hummingbirds In Washington

Feeders and plants are the only way to attract hummingbirds to your garden in Washington state. It’s never too late to fill your garden with hummingbird-friendly flowers. After all, Anna’s hummingbirds stay the winter and constantly look for a food source.

Bee balm, sage, and crocosmia are good choices. They thrive in moist soil and sunny locations. Hummingbird mint is a low-maintenance plant that self-seeds and needs well-draining soil.

Fuchsia can be planted in hanging baskets to make them more approachable for the birds. Beard tongues are easy to grow in either sun or shade. They bloom from spring to fall.

Washington state has a landscape and climate that’s very attractive to hummingbirds. Three species regularly migrate for the summer season, while the Anna’s spend all their lives here.

You can spot them in wooded areas like the Blue Mountains or the Cascades. Some pick the west while others prefer the east. They arrive as early as February and stay until September. You can spot the most hummingbirds from July to August.