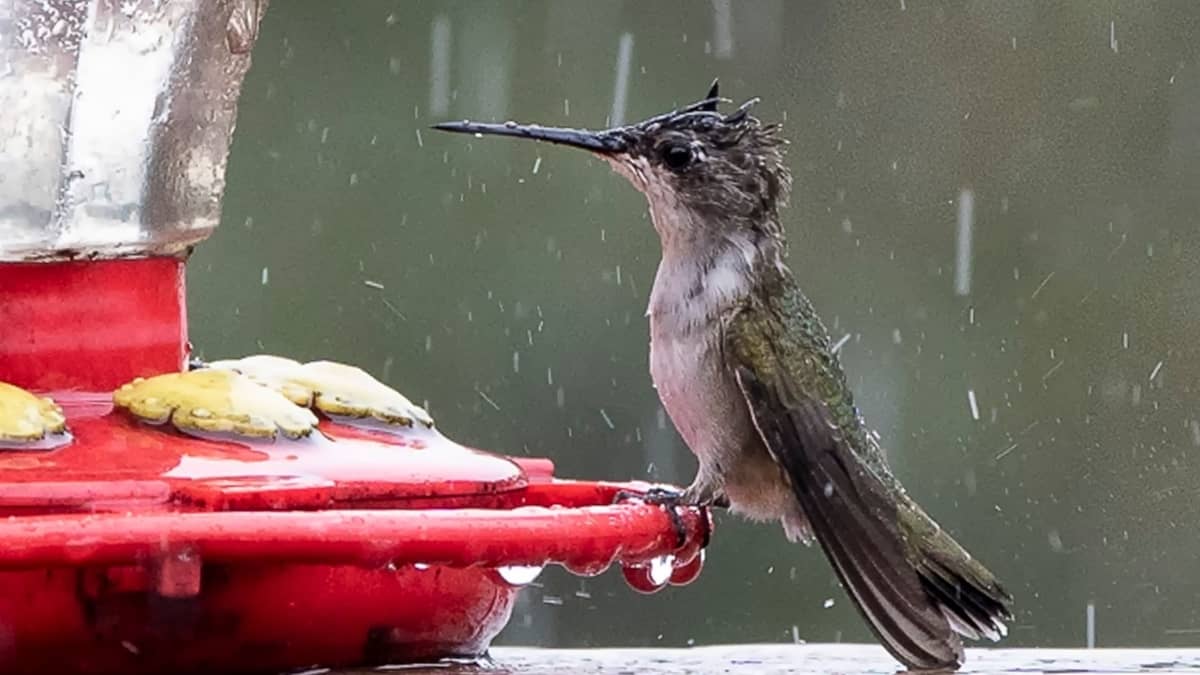 Do you know where hummingbirds go when it rains? Do you ever wonder how hummingbird adapts to or deal with heavy rain? Let’s find out.

As little and fragile as hummingbirds look, they are pretty tough little creatures. They can survive even in harsh weather conditions such as heavy rain, high wind, and other inclement weather.

It’s pretty amazing and surprising how their tiny body can accomplish many mysterious things and this makes them more interesting to study.

So, let’s further look into where our little feathered hummingbirds go-to when it rains, how they adapt to heavy rain, and other harsh weather.

Where Do Hummingbirds Go When It Rains?

Hummingbirds don’t go so far when it rains. If you’ve ever wondered if hummingbirds are able to fly in the rain, the answer is yes!

Hummingbirds are resilient birds. They are not so bothered by rainfall. Therefore, they can still come out to continue feeding during rainfall so far it’s not too heavy. 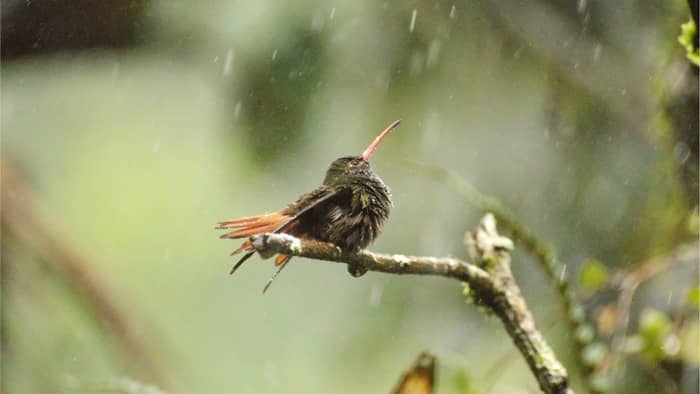 As we said, hummingbirds are resilient birds. Heavy rainfall impact can’t harm these vigorous birds. So, no matter the velocity of rainfall, it can’t cause any big force to push hummingbirds to the ground. It can’t even cause any strong force on hummingbirds to fall into any object that may cause them harm.

During rainfall, the hummingbird will adapt by changing their body position and alternate their flight pattern to shake off the rain.

Hummers can fly and even feed in the rain without getting knocked to the ground. They can survive or adapt well to the rain so far it’s not too harsh. However, heavy rainfall will cause the hummingbird to hover more and increase their wing beat as they fly. Hence, this usually requires a much greater energy output.

The fact that they have to feed multiple times every day so they don’t perish often forces them to fly in the rain and feed at some point.

But how do these lightweight birds maintain such stability to fly in the rain and possess such extraordinary features? Let’s take a look at the special features that make these tiny feathery birds able to adapt to the rain. 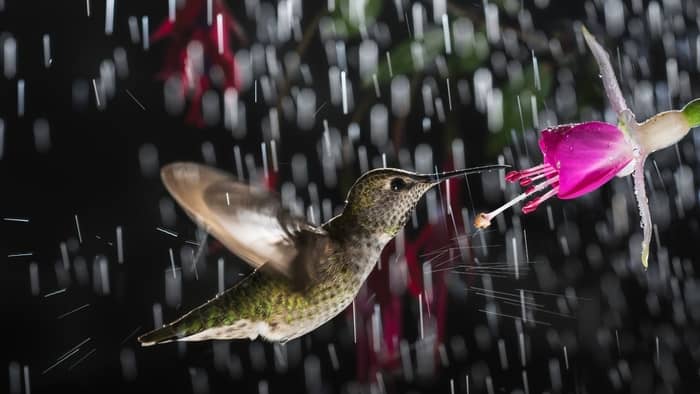 Hummingbirds’ ability to survive or even fly in the rain at some point means they have special features to allow them to do this. Some of these features include the ability to shake off the rain off their bodies even while they are in their flight mode.

Another great feature is their ability to balance the position of their body while they and hover around to maintain their flight.

Researchers have observed that hummingbirds tend to adjust with varying amounts of rainfall. When there is light rainfall, hummingbirds only require a few adjustments or even none. However, when there is heavy rainfall, a change in body position and an increase in wingbeat frequency are required.

Here are more details on the features hummingbird possess to be able to fly in the rain:

1.    Ability to shake off raindrops

Research has been made and it’s been found out that hummingbirds act in a similar way as dogs when they are wet. This means they whip or shake off their head and body to get rid of water.

The ability of hummingbirds to shake off raindrops and alternate their flight pattern is one interesting attributes hummingbird possess. So they tend to shake off the water while flying then take some rest. This whipping off or shaking off happens pretty fast in just 0.1 seconds. Almost all of the raindrops are removed during the shaking process.

Just like other birds, hummingbirds have feathers that assist them to repel water. But there isn’t any waterproof element in their plumage. They only have designs of their natural wax or oil they apply during preening.

Where Do Hummingbirds Go During Storms & Hurricanes?

During the high winds of serious storms and hurricanes, hummingbirds seek shelter and wait for the storm to pass.

Hummingbirds however do not seek shelter in their nest. They would rather find a more covered or sheltered place and hold on to the twig of a tree branch with their feet. They will hold on tight to the twig with their strong feet to avoid being blown away.

However, when the winds are extreme, hummingbirds often position themselves on the Leeward side. This means they position themselves away from the wind’s direction. They do this at the base of a big trunk to ensure the adequate shelter is provided. This way, they can be protected from severe or harsh winds.

Therefore, hummingbirds can survive massive storms safely when they hunker down as tightly as they can.

Most bird enthusiast that resides in hurricane-prone areas often secures their feeders with wire or duct tape before the heavy storm advances. This is done to keep the feeder steady and it remains for hummers till when the stormy condition calms down.

When you do this, always remember to remove the duct tape once the storm passes so the hummingbirds won’t get stuck.

Read more about How To Keep Hummingbirds From Fighting 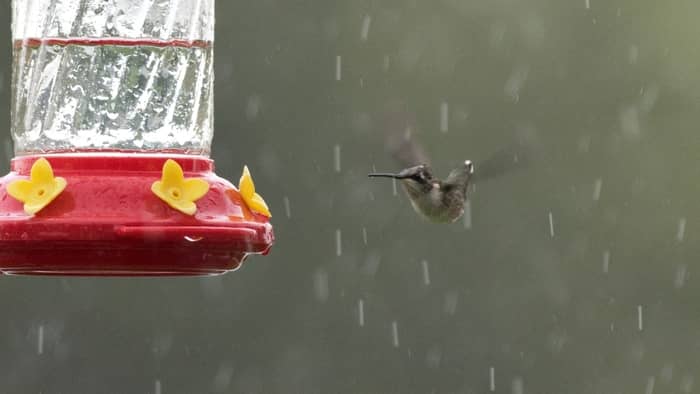 Final Note On Where Do Hummingbirds Go When It Rains

Hummingbirds aren’t as delicate as they look. They are tough birds that can survive harsh or tough conditions such as heavy rain, high winds, and other tough weather conditions.

Hummingbirds do not go far when it rains. They can still come out to feed during light to moderate rainfall. However, when the rain becomes heavy, they simply look for a sheltered place and wait for the rain to pass.

But hummingbirds can still fly in heavy rain. Heavy rainfall will only require hummers to increase the frequency of their wing beat and use more energy to fight against the heavy rain.