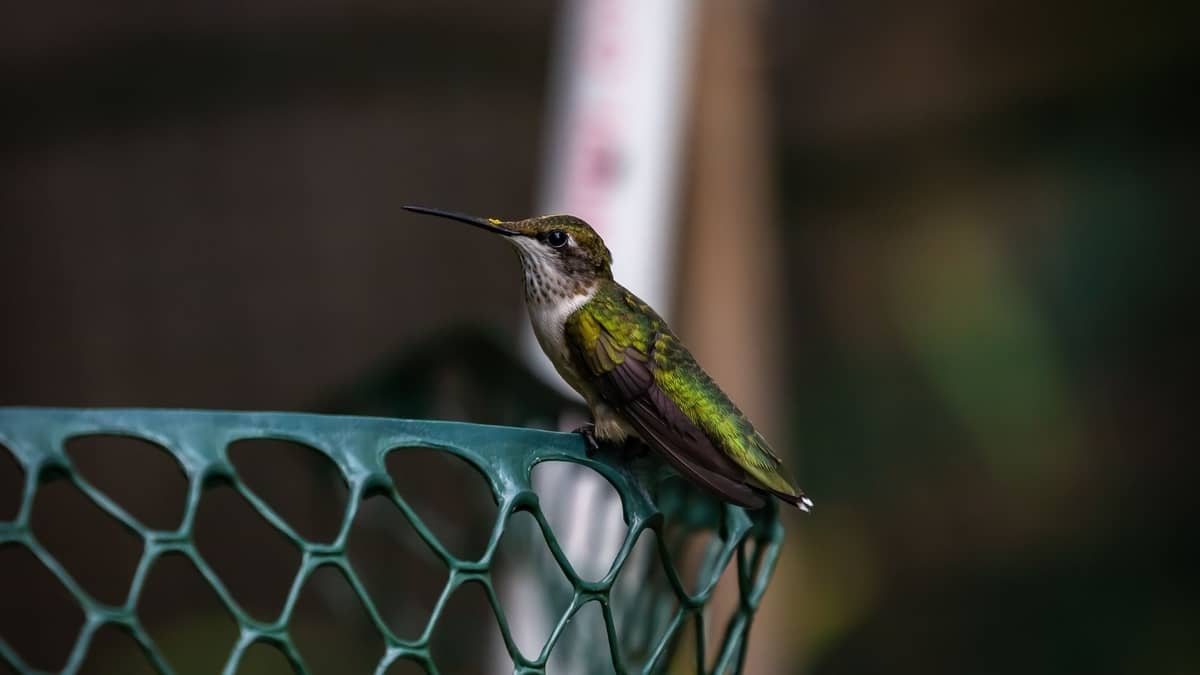 There are so many impressive hummingbird beak facts that make these tiny birds even more fascinating. Have you ever admired how hummingbirds handle their long beak? Do they really use it as a straw to slurp nectar?

The tinies bird species have an impressively long beak that helps them feed and defend. If you’ve ever paid attention to the hummingbirds in your garden, you’ve probably noticed how much they depend on their beak. Read on to find out about all the ways they use it, and some overlooked details.

The ultra-small and light birds might weigh less than a nickel but require tons of food during the day. Their beak is perfectly anatomically formed to help them source and devour some sweet nectar. At first glance, it looks like they’re using the beak like a straw to slurp on the nectar.

With closer inspection, you’ll notice how the beak opens, and a fuzzy tongue unrolls. The tongue is forked or split and it works like a pump. The tongue takes the nectar from the flower rolls back and goes back in the beak. The beak shuts, pressing the tongue to release the nectar. Then the hummingbird swallows the juice. The beak serves as a shield to protect the tongue, not a straw.

It sounds like so many steps just to intake some food. Now imagine this action repeating 15 to 20 times in a second! 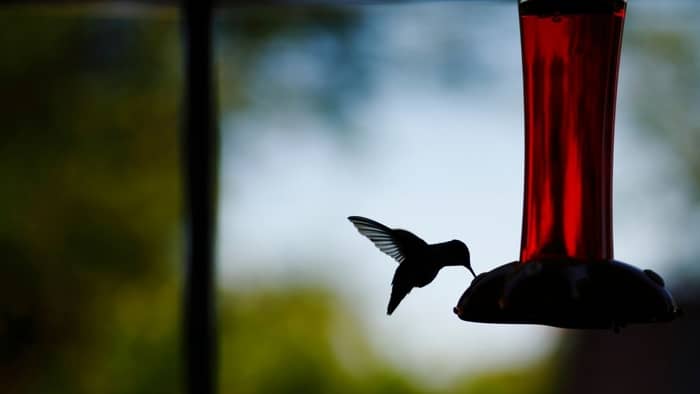 The Beak And The Food Source

Another one in the list of interesting hummingbird beak facts – hummingbirds’ beaks evolved to accommodate their food needs. This means their beak slowly adapted to the shape of the flowers they use for nectar. As a result, some of them, like the Lucifer hummingbird, have a bent beak that helps them reach the nectar of specific flowers.

Can Hummingbirds Open Their Beaks?

Looking at the way a hummingbird feed, you’d think it doesn’t even open its beak. Hummingbirds have the utmost control over their beaks and usually open just half of its length or the end part. If you’ve seen a hummingbird with an open beak midflight, it’s probably on its way to capture a fruit fly.

Often hummingbirds will open their beaks when they’re too hot. You can witness this if you have a feeder on the sunny side of your garden and live in a sweltering climate. Why will hummingbirds expose themselves to scorching conditions? Well, they’re tiny and eat half their body weight in nectar in a day to survive. And if your feeder is their only source of food in the area, you can catch them opening their beaks to breathe. 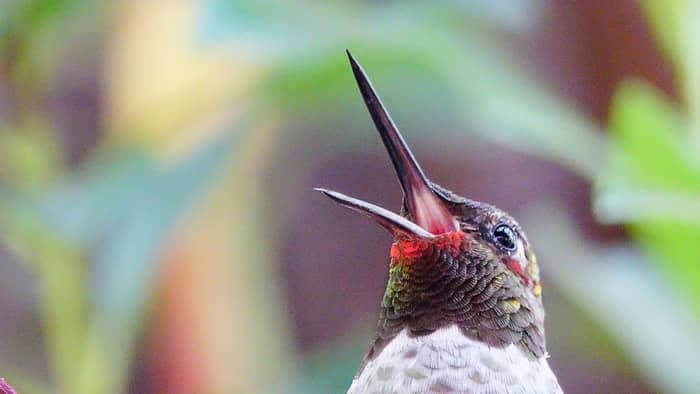 What Color Is A Hummingbird’s Beak?

There are over 365 species of hummingbirds around the US and 15 types. Some of them habituate here year-round, and others migrate. Each kind has a distinctive color of its beak. Even hummingbirds of the same type but different age have differently colored beaks. Most of them, however, have a black-colored beak. Some can have two-toned beaks, usually red or orange, with a black-dipped tip.

The Ruby-throated hummingbird, one of the most common in the US, has a shiny to matte black beak. The Broad-billed Hummingbird has a red-orange beak, while Anna’s hummingbird also has a black beak.

How Long Is A Hummingbird’s Beak?

Hummingbirds have long, narrow and pointy beaks to dive deep into flowers. During nesting, their beak is still developing, but by the time they’re ready to fledge, it grows to its full length. Hummingbird beaks can go from 8mm to 119mm, depending on the kind.

Avid birdwatchers refer to the beak as the bill. When researching more about the hummingbird’s anatomy, you’ll find bill instead of beak, but it’s the same part of the bird’s body. Here are some overlooked facts that you might find interesting.

A hummingbird’s beak is one of the most extended beaks among birds, in proportion to their body. This size might look hard to manage by a bird weighing less than a nickel. But beaks are flexible, to some extent. They can bend for 25 degrees, helping reach less accessible food. 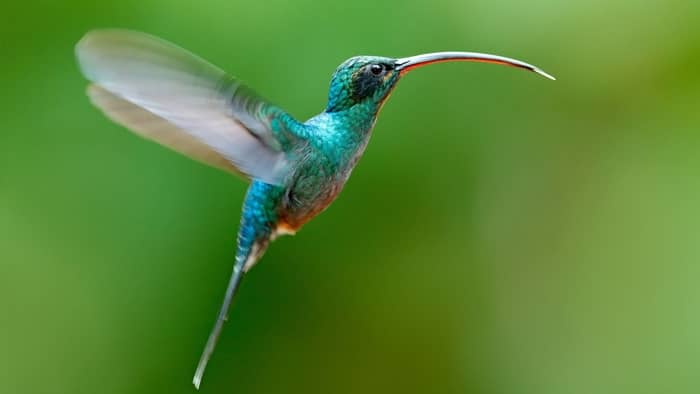 Although flexible, the beaker can break. These accidents often happen when the bird tries to escape a feeder with narrow holes or when hitting a glass window. Keep this in mind when making and positioning your own feeder. Small holes might prevent other bugs but can hurt the hummingbirds.

Hummingbird Use The Beak As Weapon

The sweet little birds don’t think twice when they feel threatened. Especially during mating season, the male hummingbirds use the beak as a weapon. They will stab their opponent right in the throat with their long and narrow beak. The same scenario applies when they’re fighting over territory.

Hummingbirds don’t feed on nectar alone. In some territories, where nectar is scarce, they’ll even switch to an insect diet. Hummingbirds hunt insects in several ways – but they all include the beak. One of them is to open their beak and catch an insect during flying. Another is to reach with their beak among flowers and trees where other birds can’t fit. They even go for spider webs and eat the insects trapped in the web.

Read more about The Best Place To See Hummingbirds In Arizona 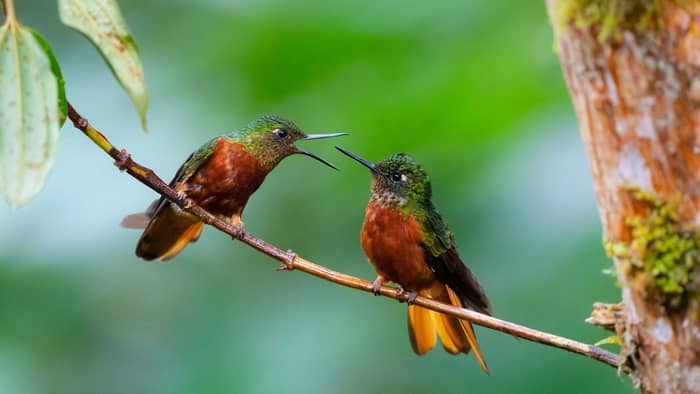 A hummingbird’s beak is one of the fascinating parts of these birds. It’s a distinct body part that adapted to the food sources throughout the years. It’s solid enough to be used as a weapon and to protect the tongue. At the same time, it’s flexible and can bend to reach some insects.

Some kinds come with bright-colored straight beaks, while others have hooked, black beaks.

Be careful where you position your feeders and how wide their holes are. Hummingbirds can hurt or break their beak while trying to reach for food.

Did you know some of these facts? Do you have a window feeder that you need to move? Let us know in the comments below!