We hummingbird enthusiast loves to have these sweet iridescent birds hovering about our yard. But do you know how to differentiate the male from female hummers? So many hummingbird species zipping around your vicinities may have you wondering which is males or females.

Differentiating hummingbird gender using colors isn’t such a difficult task. A simple look at their colors can give you your answers. Then with more guidance and getting more knowledge, you can simply become a pro in their identifications.

Hummingbird:  Some Facts About Them

Before we look into hummingbird colors for the male and female, let’s look into some facts about hummingbirds: 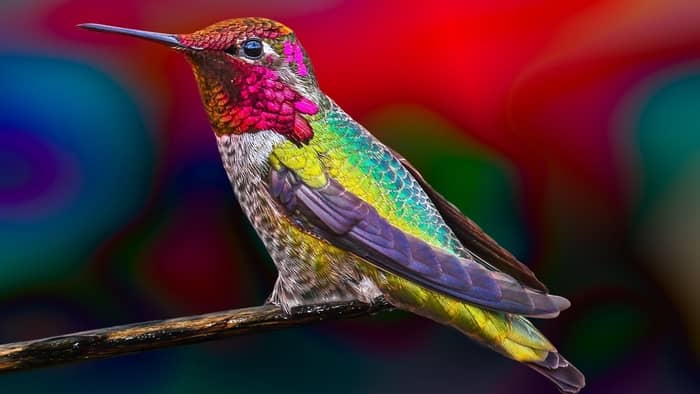 One of the visible characteristics we love about these sweet hummers is their shimmering radiant colors. Their colors are so radiant and lustrous that their sight can keep anyone captivated which is why we have so many hummingbird enthusiasts that love to attract them to their yards.

These birds also have their gorget (a patch of feather color on the throat of hummers) decorated with dazzling color. This dazzling gorget feature is most common in male hummingbirds.

Each of these 5 hummingbird species mentioned above has its own unique colors that can assist in differentiating them.

So, let’s briefly look into these 5 species of hummingbird and their colors.

Ruby-throated hummers are one of the most common species in most parts of the United States. They can be identified by bright emerald green or gold-green seen on the back of their crown. Their underpart looks grayish white.

The males are identified by their bright red throat which is where their name comes from. The female and juvenile Ruby-throated appears o have this blunt round tail that is mostly black and white tips to the outer feathers.

The Rufous male hummers colors come in glowing coals when the light hits their feathers just right. Their backside and belly tend to be bright orange. Their throat appears fiery red.

The female on the other hand appears green from above with a rufous washed flank. They also have Rufous patches in their green tail with a bit of orange spot on their throat.

They appear green and coppery orange. The Allen’s male hummers have this distinct eye patch and belly contrasting their greenback. They also have a dark red gorget.

The female is identified by bronze-green above with paler coppery sides.

Anna’s hummers mostly appear gray and green with the absence of any Rufous or orange marks on their body.

The male Anna’s hummers throat and the head appear iridescent red (almost looking pink). Their feathers can look dull brown in the absence of sun rays.

The male of this hummingbird species has their head and crown iridescent purple. Then they have their back as green.

The female on the other hand looks green with a white underside. Then they have this white eyebrow stripe making it easy to identify them. 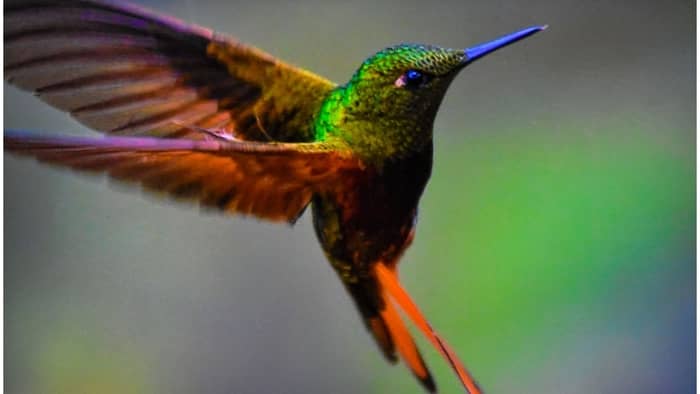 To be enlightened further on how you can differentiate the male and female hummingbird using their colors, let’s give you more guidelines and descriptions.

The male hummingbirds are the ones that have more bright or dazzling feather colors. They have their feathers to be radiant so they can easily attract the female hummers during their courtship display. They also use these bright colors to dissuade males by showing their dominance.

The male hummers are also famously known for their radiant gorget. Their gorget can come in different bright colors such as orange, pink, blue, green, red, purple, and so on.

During the male courtship display to the female, he will align his radiant gorget and feathers to sunlight so it can sparkle. By aligning his feathers to the refractive direction of the sunlight, it gives his feathers and gorget more visibility.

The female hummers have less conspicuous feather colors. This means their feathers aren’t bright or radiant compared to the male hummingbirds. The female hummers color mostly come in dull colors such as brown or dull green.

Additionally, immature or juvenile males also come in less conspicuous colors. So, they can look like females considering the fact that they have no radiant colors.

Final Thoughts On Hummingbird Colors Of Male And Female

It’s really easy identifying different hummingbird species of both male and female from their colors. We have given you great hints and descriptions on how you can identify them easily.

So, if you were probably in doubt about identifying any common hummingbird species, by now you should be able to tell the difference from our guidance.