Let’s talk about male vs female hummingbirds. With so many species of hummingbirds hovering around the sky, have you ever wondered which gender you’ve been observing?

It isn’t so difficult determining which gender of hummingbirds you have been observing. Identifying their gender is as simple as looking at their color. Then with some more guidance, you can become an expert in establishing which hummingbird is male or female.

In this article, we’ve outline ways to help you establish which hummingbird is male or female. So, continue reading to learn more info on male vs female hummingbirds.

It’s pretty easy to differentiate male vs female hummingbirds by simply looking at them closely.  Taking a close look at their physical appearance, how they behave, their size, and so on, can easily give off their gender.

Let’s look into some features you can use to identify male vs female hummingbirds.

You can identify hummingbird gender by these features below:

1.    Appearance such as color

One easy way to distinguish male from female hummingbirds is through the colors of their feathers. 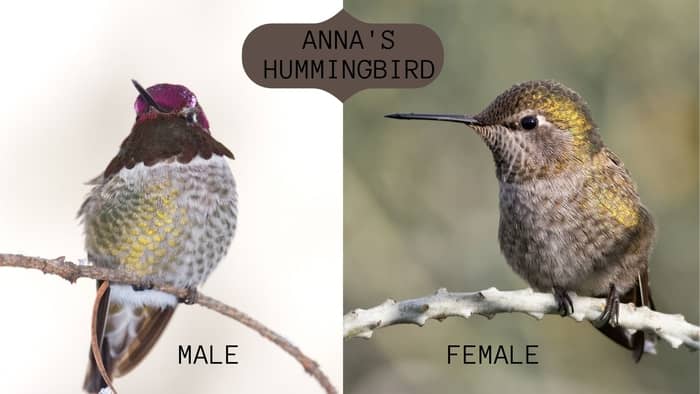 The male hummingbirds have the most colorful and luminous plumage. They use this to attract the females when it’s time for mating.

Male hummingbird has a patch of dazzling feathers on their neck know as a gorget. The color of the male gorget can be orange, red, blue, purple, blue, and pink. The beautiful feature about this gorget is that when the sun shines on them, it will sparkle. The male hummers can also make their gorget look plain or black to avoid predators.

The tail of the male hummers often has plain colored feathers without any visible pattern.

The female hummers on the other hand have dull or less brightly colored feathers. These dull feathers female allow them to easily camouflage into their most environment. This way, they can be less visible to predators. Females usually have a brown or dull green color.

Identifying the gender of hummingbirds through size may not be as easy as when you identify them using colors. Determining their gender from their size maybe even harder especially when they are in flight. However, female hummingbirds are usually bigger than males.

The female often weighs around 2.8 to 4.5 grams. The male on the other hand often weighs 2.4 to 3.6 grams. Their size varies mainly because of the responsibility of the female hummers to carry the eggs.

Also, the females require extra body weight to produce more heat by sitting on their eggs or broods to keep them warm. She also has to have extra weight to be able to share her food with her broods. 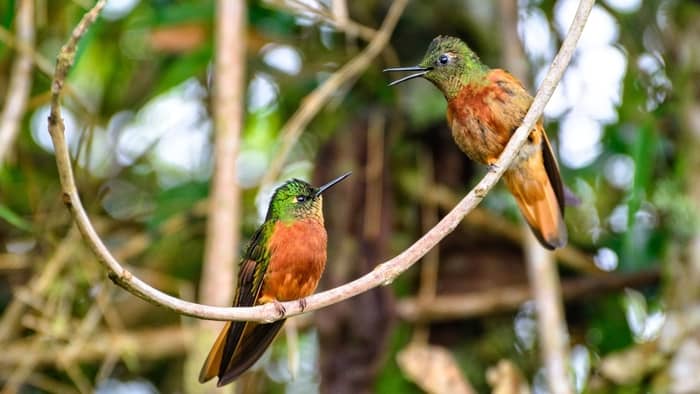 Generally, the male hummingbirds display a more territorial and aggressive behavior compared to the females. Their territorial behavior is required so they can attract females and keep other males from coming close to their space. Male hummingbirds can even get physical and chase other intruders away.

The female hummingbirds can as well be territorial and aggressive when necessary. Hummingbird mothers have that protective mother instinct and they will defend their babies so fearlessly from any predators.

The mother will show so much courage that she is capable of chasing other animals twice as large as she is. She can chase away cats, hawks, bigger birds, or even humans.

Also, the female hummingbirds can show territorial behavior based on food source availability and even nesting materials. Hummingbird mothers need to build a strong nest for their broods to thrive in harsh weather.

A readily available food source also benefits the mother because it will supply her with easy access to a food source for her and her broods.

Another behavior to distinguish male vs female hummingbirds is nesting behavior. If you notice a busy hummingbird flying to and fro to a specific location or you see the hummer carrying materials on her bill, then that’s a high probability to be a female building her nest for her incoming offspring.

Also, if you witness a particular hummingbird caring for hatchlings, constantly flying to and fro to return to her nest with food in her mouth, then that’s a mother hummingbird. Only the female hummingbirds are responsible for caring for her offspring. The male takes no part in this. 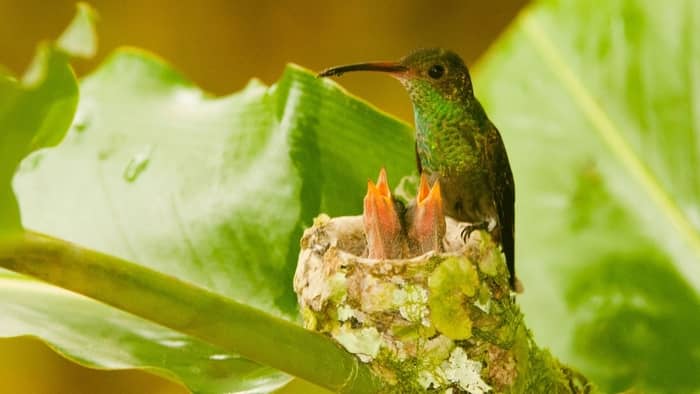 Mating behavior is another feature to identify hummingbird’s gender and it’s so easy telling from their mating behavior.

The male hummers are known to sing songs to gain the attention of female hummers. They tend to flap their wings so fast that it generates a loud humming song. The humming sound is where we got the name hummingbirds from.

Females on the other hand don’t require so much effort during mating season. The female hummingbird will simply sit, watch, and listen patiently to be impressed by the male’s display.

Even though female hummingbirds don’t require performance during mating sessions, they are still capable of making sounds by flapping their wings.

Learn more about Do Hummingbirds Come Out At Night?

As we can see it’s so easy to identify either male or female hummingbirds. Just look through the listed features and you should be able to easily identify these sweet birds hovering around your vicinity.